Life in plastic isn’t so fantastic.

First fully loosed upon the earth in the early 1950s, the wonder material of the age detonated like an atom bomb. Plastic, of one shape or another, can now be found in every corner of the globe — from the densest urban centre to the deepest ocean trench.

But increasingly the exploding plastic inevitable, to borrow a phrase from Andy Warhol, has spawned entire industries dedicated to its eradication.

The Canadian government recently committed to banning all single-use plastics “as early as 2021.” Which is a positive step, but in the meantime, the plastic tsunami continues to roll.

More than half of current plastic waste was created in the last 13 years, with 80 per cent of it ending up in rivers, lakes and oceans. In the ocean, plastic never dies, it simply gets smaller. Micro-plastics have even invaded the food chain, with people ingesting 50,000 particles per year.

According to Ocean Legacy, there are more than five trillion pieces of plastic in the ocean — plastic bags, flip-flops, toys, bottles, straws, toothbrushes. Most will long outlive their human users. Hundreds of years from now, Happy Meal toys will still be washing up on beaches around the world.

But before you hang yourself with a rope braided out of Costco bags, the tide may be turning.

The Ocean Legacy Foundation, the Victoria International Marina and the Natural Talent Alliance have created Future Oceans, a campaign aimed at raising awareness and $500,000. It kicks off July 1 at the Canada Day celebrations in Victoria with an eco-fashion show. Ten designers will be presenting ensembles fashioned from ocean plastic.

Future Oceans is not alone in turning plastic into fashion. Patagonia, Everlane, Adidas, Prada and other companies have all incorporated recycled plastic into their designs for everything from shoes to bags to fleeces and cute little bracelets.

Adidas upped the ante, saying it intended to make some 11 million shoes from ocean plastic. This might look like a big number, but it’s only a drop in the bucket when it comes to the amount of plastic currently bobbing about in the sea.

Changing our plastic habits will not be easy or quick.

Take a trip to a supermarket, Canadian Tire or, worst of all, a dollar store where the off-gassing reek of cheap plastic creates a palpable atmosphere of despair. You will see a veritable sea of the stuff, with more being created every minute.

But as Guardian columnist George Monbiot has noted, changing consumer habits doesn’t really get at the root of the issue. “What we have to do is the big structural economic politic stuff,” he said in an interview on Frankie Boyle’s New World Order. Campaigns to persuade people to change shopping habits are “pathetic micro consumerist bollocks.”

Putting bottles in the recycling bin and shopping at zero waste stores isn’t useless, but it won’t solve the problem. Monbiot says even modest growth (three per cent per year in GDP) cannot be sustained. Swapping out plastic straws for paper ones, banning plastic bags or getting rid of Q-tips provides the comforting illusion of change while leaving business to go on its merry way.

This was made clear in a recent episode of the BBC’s new program War on Plastic. Host Anita Rani interviewed a worker at a recycling plant, who explained that one of the most problematic things they deal with are McDonald’s Happy Meal toys.

“Clearly, many kids and parents think they’re doing the right thing by putting their giveaway toys in the recycling,” said Rani.

But the documentary showed a mountain pile of discarded toys collected over a 24-hour period, some still in their original packaging. The teetering, brightly coloured heap looks a little like a Jeff Koons sculpture from hell. As Rani poked about in the pile, the strange conjunction of silly little stuffies and creeping environmental horror exploded in my brain. “Can Happy Meal Toys be recycled? Yes, they can!” states the McDonald’s website. In theory maybe, but in practice, not so much.

Especially given the sheer number of toys — 1.4 billion — given away every year. A little plastic doodad meant to provide a momentary flash of pleasure for a child, multiplied billions of times, becomes a monstrosity, a leviathan of plastic, a wave of junk, maniacally bright and cheerful about to drown us all.

In good British fashion, the BBC show urged viewers to take plastic back to the store, with a note explaining why. The episode also launched a petition from kids, who asked McDonald’s to remove plastic toys from Happy Meals. They received no reply from the mega-corp.

As the number of campaigns to reduce plastic waste expand, fashion has taken up the banner with a flourish. Initiatives like Future Oceans have been joined by a deluge of new brands and products promising sustainability, offering the chance to ease your guilt and restore the environment, and look cool while doing it.

Does turning old plastic water bottles into new shoes, recycling old products into new or making longer-lasting items — all part of the “circular economy” approach to reducing waste — simply kick the can down the road a bit?

As a number of analysts note, adopting the approach may help sustainability practices, but it will not fix the problem.

As a Forbes article on waste and the fashion industry bluntly states: “No amount of reusing or recycling will offset the continuous growth of the industry as it stands, so the solution is to simply produce less. Yes, this is an unpopular opinion, but given the catastrophic impact of climate change, we have no choice but to dramatically change the way the industry operates.”

Writer Whitney Bauck took a deep dive into the subject of sustainable fashion for Fashionista Magazine. Her assessment of circularity, especially when driven by big corporations, is decidedly skeptical. “Unchecked growth and fashion’s overconsumption problem” are the real issues, she says.

The most radical answer might also be simplest: Stop buying stuff.

But here is where things also get extraordinarily complex. If capitalism is the issue, creating more stuff, even if it’s slightly greener and less plasticky than other stuff, is a little like declaring a climate emergency and in the next breath declaring that pipelines are the answer.

While, a circular economy holds out some hope, actually changing the entire system will require mobilization like that of the Second World War.

Breaking the shopping habit is not going to be easy. It took decades to convince folk that shopping was akin to a patriotic duty, and it’s become something of a fetish.

The growth of unboxing and haul videos on YouTube is exploding. For those of you asking what the heck is a haul video, the short answer is a person filming themselves talking about all the stuff they bought in delirious detail. The endorphin hit that shopping provides is twice as powerful with online shopping, as it provides a double dose of the stuff — once from the initial rush of buying things, and another when the package actually arrives.

It’s little wonder that people are hooked hard. But whether it’s packaging, fuel consumption or the stuff itself, all of this shopping creates extraordinary amounts of waste.

An interesting thing happens when you look hard at your own patterns and decide to change them. I recently curtailed my fashion habit, limiting purchases to secondhand clothing, except for shoes, underpants and socks. And the occasional lipstick.

Turns out that when you remove shopping from your daily activity, it frees up a lot of time.

But there are other unexpected consequences. There is a social aspect to shopping; wandering around the mall and grabbing lunch at Nordstrom is not quite the same as picking your way down the aisle of Value Village and eating a torta at Duffin’s Donuts. So, yes, the glamour factor is somewhat diminished, but women are adaptable creatures. And we must change our shopping habits, if anything larger is to shift.

Female consumers are responsible for the majority of household purchases (some 70 to 80 per cent, according to estimates). Buying new things is equated with happiness, satisfaction, pleasure, friendship and fulfillment. And it’s so damn easy. But if the market will not solve the problem — indeed, if the market is the problem — an entirely new approach is needed, preferably one that doesn’t involve shopping.

Changing the consumerist mindset is almost as challenging as ridding the ocean of plastic. I know this because I’m trying to do it, and it’s really hard.

The answer to the climate emergency isn’t 11 million new shoes from old materials from Adidas. It’s fewer shoes. It’s less growth, less stuff, less plastic, lest we lose it all. 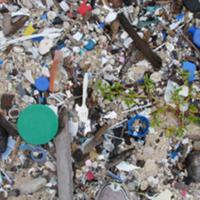 Canada’s Chance to Save Our Oceans from Choking in Plastic

As a number of studies have indicated, plastic waste isn’t simply unsightly and polluting, it’s dangerous. In a single year the production and incineration of plastic added 850 million metric tons of greenhouse gases to the atmosphere according to a new report entitled Plastic & Climate: The Hidden Costs of a Plastic Planet.

It’s all horrifically interconnected, and disastrous.

“Whether measured by its impacts on the climate, environment, or human health, the rising flood of disposable plastic creates risks humanity can no longer accept,” as the Guardian noted.

The ultimate — nay only — solution is to cap plastic production at its source and put an end to fossil fuels.

In the meantime, if you would like to donate to the Future Oceans, you can visit this link and throw your five bucks into the pool. Or better still, grab a bucket and head to the beach and start collecting plastic trash.