I bought a jumpsuit.

I didn’t expect it to change much, but when I put it on something strange happened. All of a sudden, I felt like doing things — all kinds of things. Fighting crime, fixing a tire, climbing a hill, learning kung fu, rescuing a cat from a tree, kicking bullies, helping an older lady across the street, solving all the world’s problems.

This might seem a bit of a stretch for a single garment, and perhaps I exaggerate a tiny bit. But the jumpsuit has changed me, and I am not alone. A number of women have embraced the all-in-one garment.

Jumpsuits take a star turn in director Olivia Wilde’s new film Booksmart where best friends Amy and Molly don matching boiler suits and head out for the night of their lives, kitted up with revolutionary berets, jaunty scarves, Chapstick, and mace.

The jumpsuit worn by actress Phoebe Waller-Bridge in the series Fleabag started something of a fashion firestorm. The damn thing sold out in a heartbeat, jump-started a host of copycats, and also started a Twitter war with some pundits maintaining that it ought not be worn by women with “real whompers,” meaning large-bosomed women. Only the tiny-teated would be best suited. Other folk argued that any mammary — large, small or somewhere in-between — could join the jumpsuit nation.

Those weary of the what-not-to-wear wars, hold on tight, something is afoot!

To borrow words from legendary clothes horse Diana Vreeland: “Fashion is part of the daily air and it changes all the time with all the events. You can even see the approaching of a revolution in clothes. You can see and feel everything in clothes.”

If Vreeland is right, and lord knows she always was, then the jumpsuit just might be uniform of the fashion shock troops. It is a handy outfit, one part Rosie the Riveter, another part fabulous Fleabag, but it’s only part of the changing fashion guard. Shoes, the foot soldiers of any revolution, also have a role to play.

High heels were the centre of a recent sartorial battle in Japan with more than 30,000 women sharing a petition that women should not be forced to wear heels at work. Japan’s labour minister got involved and kicked up a fuss by arguing that high heels were “necessary and appropriate.”

Enforced heels, whether at the Cannes Film Festival or right here in British Columbia, have drawn the ire of women, who are hobbled by such edicts.

The truth about walking a mile in someone else’s shoes, to repurpose the words of the Japanese labour minister, is also “necessary and appropriate” if you want to understand the reality for working women. As a Guardian article dryly notes “... no item of men’s clothing causes such hampered movement or physical pain. Indeed, high heels fit into a long history of women’s physical repression and mandated suffering.”

The #KuToo movement (with its play on the Japanese words for shoes and pain) isn’t about the choice to wear heels, but about the enforcement of gender norms.

In this, the lowly high heel has entered a cultural moment when the policing and criminalization of women’s bodies — what is on them and inside them — has reached bizarre new levels. Increasingly, fashion is where the battles over control, power and freedom come to public attention, whether it’s Nigella Lawson’s burkini or hijabs in Quebec.

It’s not much of a leap from dictating what women must wear to legislating control of their bodies. If men’s clothes are made for movement, women’s clothing is often designed to immobilize. If you’ve ever tried to run in high heels and a pencil skirt, you know what I’m talking about. But the end of high heels, long predicted, might finally be happening.

Anyone with an interest in the anthropological aspects of fashion can prove this just by sitting on Granville Street in Vancouver for an hour and watching people walk by. The first thing you’ll notice is that heels are losing out to more comfortable forms of footwear — sneakers, flats, boots and sandals. Younger women started the trend. (High heels might be one more thing to add to the millennial kill list, along with diamond engagement bands and the Republican Party.) But older women, too, have embraced the demise of vertiginous heels.

Dress codes are interesting because they are in fact so coded. High heels connote femininity in the most conventional way, along with other traditional accoutrements of womanhood — dresses, makeup, long hair. But gender norms aren’t quite as hard and fast as they once were. In fact, they’re kind of worn out, which is perhaps why jumpsuits are having a resurgence. They feel new.

But increasingly, they’re the outfits for women who want to move.

Which brings me back to my own jumpsuit experience. I wasn’t expecting to feel transformed. But when I pulled it on, suddenly I felt free.

The funny thing about putting on a piece of clothing where you don’t have to worry about your waist, straps falling, skirt riding up or boobies falling out is that the physical experience takes you back to an earlier period. Let’s call it the overall era, a time, pre-sex, when the only thing that mattered was that you were capable and comfortable. I felt like my 10-year-old self again, and that felt strangely liberating.

At a certain point in your life, when seduction and sexiness become less important than comfort, giving up things like tight skirts and high heels or anything else that limits your mobility feels reasonable. When you’re not hobbling around in shoes that are so agonizing that they remove your will to live, you actually feel like doing lots of different things, like marching in the streets or participating in a riot.

Fashion, reactionary and prescient, is often at the vanguard of social change, a signifier of some evolution about to happen. Women’s clothing has often been tied to larger social movements and to female emancipation itself. The flappers, freed from corsets, kicked off the jazz age. The hippies broke out beads and caftans, and now young women and older women have embraced shoes they can move in, dresses with pockets and jumpsuits.

The things that women wear or don’t wear continues to divide and distract folks, but the bigger picture may be getting lost in the soft shoe shuffle, which is namely that by the time you notice that things are changing, you’re knee deep in the shift.

The end of fast fashion, the fall of retail giants like Top Shop and the demand for sustainable practices have heralded big changes in the fashion world, but they have implications for the broader society as well. Is the end of capitalism nigh? Maybe! But the looming environmental collapse has focused attention on how humans need to curb their fashion appetites.

The other day it occurred to me how much time shopping takes, and how much work it is. While the end of fast fashion cannot come soon enough for the planet, we human females have been well trained to dedicate endless time and energy towards the quest for more stuff.

But what happens when you stop?

A number of public campaigns have highlighted the need for less stuff. Billboards dedicated to reduce, repair and stop buying so much shit are everywhere in Vancouver at the moment as part of Metro Vancouver’s Think Thrice initiative. Fashion is one of the most wasteful and polluting industries on the planet and one of the key engines of consumerist capitalism. We need to change not only our clothes, but how we produce them, use them and dispose of them. Discarded clothing makes up a staggering percentage of landfill, some 12 million tons per year, according to a recent CBC Marketplace report. 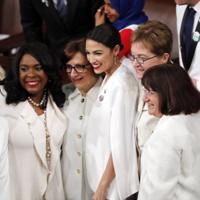 Who Called the Political Fashion Police?

Like any major shift, the movement towards less stuff takes some getting used to, and here are where jumpsuits come in handy. As an all-in-one outfit, they remove the period of endless dithering abut matching tops and bottoms that beset the most rational women when faced with a closet bulging with too many choices.

Not having to worry about what you’re wearing every day, feeling comfortable in your skin and your shoes, is a little like waking up from a long period of somnambulist stupor. If you’re worried about getting bored, simply borrow a page, a scarf or a nifty hat from the Booksmart women and accessorize that shit. The only caveat about joining jumpsuit nation is to give yourself sufficient time to make it to the bathroom.

So suit up, and go save the world.