For the last four weeks I’ve been commuting to The Tyee on my fancy bike.

Via Quebec Street in the morning, where the bike lane is just two painted lines with cars passing on both sides, and sharing Ontario Street with other cyclists, mostly on road bikes with a pannier on one side, on the way home.

As a Dutch girl who’s lived in Amsterdam off and on for five years, and an avid cyclist — I drove across the country from Halifax to my four-week internship with my bike on the back of my car — I’ve been fascinated by the bike lane debate here.

And I can’t help but add my two cents to the conversation, especially on the perception that Amsterdam represents some cycling ideal.

Amsterdam is a biking mecca, tied maybe with Copenhagen with its cycling superhighways.

The cycling facts about Amsterdam are often repeated in articles and reports. In the Venice of the North, bikes outnumber residents 881,000 to 834,713. About 63 per cent of residents are daily riders, covering a total of two million kilometres per day on the 513 kilometres of protected bike paths that crisscross the city.

Vancouver currently has 80 kilometres of “all ages and abilities” bike lanes, the category for bike lanes separated from vehicle traffic. Six per cent of the city’s 630,000 residents hop on a bike to get to work. It’s the best bike city in Canada, and from 2011 to 2016 the number of people cycling to work has gone up 41 per cent.

But there’s no comparison with Amsterdam.

Much has been written about the “casual” cycling culture in Amsterdam, including by Vancouverites Chris and Melissa Bruntlett. The couple travelled to the Netherlands in 2016 and two years later came out with a book called Building the Cycling City: The Dutch Blueprint for Urban Vitality.

They’ve been interviewed about their experiences in media all over North America and even broke into the Dutch blogosphere, sparking articles like “What outsiders find most fascinating about our Dutch cycling culture.” Answer: no helmets, most bikes are on the verge of falling apart, enormous bike parking lots, kids take cycling courses in school and the high-quality bike lanes.

It’s true that biking in Holland is second nature. The prime minister bikes to work, nannies with five kids piled in a cargo bike pedal their way to the park. High-schoolers cycle in intimidating packs, smoking, talking and listening to their headphones. Businessmen woosh around in suits and pointy-toed loafers, scrolling on their iPhones while they pedal. All made possible by infrastructure that prioritizes cyclists. Holland even has a Dutch Cycling Embassy, dedicated to exporting our supposedly superior two-wheeled ways.

In September 2018, Tyee contributing editor Crawford Kilian wrote a piece about his impressions of Dutch cycling after a visit to Amsterdam. “Bikes, scooters, mopeds, cars, buses and trams all functioned smoothly together,” he wrote. “Pedestrians routinely checked left-right-left before venturing across the street.” He described a harmonious union of sustainable transportation methods, an organized chaos that flows.

“Unless we’re willing to study the Dutch and other European transportation systems, and to pay the price of emulating them, no one in a Vancouver bakery is likely to see traffic moving as smoothly and cleanly as it routinely does on Albert Cuypstraat and countless other Amsterdam streets,” Kilian concludes.

Though that is the dominant narrative, it’s not the whole story. Biking in Amsterdam is anarchy, and the price of emulating the Dutch way is to embrace a level of chaos that Vancouver never could or should.

Dutch cycling culture is built on more than smooth bike lanes and giving two-wheelers to two-year-olds — it requires giving cyclists total dominance on the roads. Pedestrians are checking left-right-left because if they don’t, they’ll be run over by a bike.

Here, drivers rule the road. In Amsterdam, cyclists are kings and queens of the path. Their reign dates back to the 1970s, when cars were encroaching on Dutch streets and cyclists revolted. In 1971, over 3,000 people were killed by motor vehicles, 450 of them children. A campaign was launched called “Stop de kindermoord” — stop the child murder. At the same time, the 1973 OPEC oil crisis sent gas prices skyrocketing. So the Dutch government began to actively invest in cycling infrastructure, building up to the impressive network that exists today.

Beyond political victories, the difference in biking attitudes is cultural. Dutch people are blunt, a far cry from the “sorry! — No, I’m sorry” culture that exists here. In Amsterdam, you’re more likely to hear “move asshole!” Put riders with that attitude on a protected bike lane, and you get a swath of people ready to run pedestrians over.

In his piece, Kilian writes that “maybe the Dutch newspapers are full of drivers’ complaints about bikes hogging the roads, but I saw no sign of hostility.”

The newspapers are full of complaints — not from drivers wanting road space, but from citizens challenging cyclists. Op-eds abound, with titles like “Bike-terror Amsterdam: ‘Different rules apply here’” or “Amsterdam cyclists ignore the rules.” The Dutch government website has a section that lists questions like “Am I allowed to play on my phone, listen to music and make phone calls on my bike?” (yes, but that’s changing) and “Will I lose my driver’s licence if I get pulled over for biking drunk?” (no).

So, all is not perfect in Europe’s cycling utopia, despite, or perhaps because of, the ideal infrastructure. When you build a safe bike path, bikers will come. And scooters. And e-bikes. And cargo bikes. The bike path has become its own traffic ecosystem, and with that comes familiar problems: road rage, speeding and distracted driving.

“A meal delivery person on an e-bike squeezes himself through the bicycle crowd. Two cyclists almost come under a bus because they ride through red. A Canta car tears through the intersection at least 40 kilometres per hour. A teenager on a bicycle yelling at two crossing pedestrians: ‘We always have priority!’

“Evening rush hour on one of the busiest bike routes in Amsterdam: the Weesperzijde,” the article continued. “If you stand here along the bike path between five and six in the evening, you’ll immediately see: it’s busy. Insanely busy.

“On a strip that is less than a metre and a half wide, cyclists ride in droves, one after the other at high speed. At least one-third wear headphones. At least 40 people are stuck in traffic at the traffic light. It’s swerving, turning, braking and accelerating on the square centimetre. Survival of the fittest.”

Those are the article’s opening paragraphs (for those wondering, a Canta is a tiny car that drives on the bike path, meant for people with mobility issues).

Cyclists in Amsterdam ride through red lights. There’s national debate about scooters on bike lanes, notoriously ridden too fast by young guys without regard for other bike path users. Stoned tourists in low gear swerve the entire width of the path, like a moving maze for other cyclists to navigate. And traffic fatalities in 2018 were the highest they’ve been since 2010. 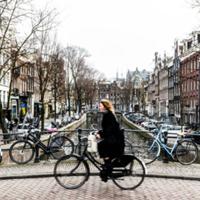 In Amsterdam, Transportation Is Electrifying

In 2015, the most recent year available, one cyclist died in Vancouver traffic. In Amsterdam, on average six cyclists are killed in traffic each year. Proportionally, the numbers make sense. But a recent report by a Dutch traffic safety organization found that, among cyclists in Amsterdam, the number of serious injuries resulting from traffic accidents in 2016 was 14 per cent higher than 2010. On average, there are three cycling accidents a day in the city, and 2018 research shows that 44 per cent of cyclists in Amsterdam feel unsafe.

In Vancouver, trends are more optimistic. The city reports that 54 per cent of people are interested in cycling more often, compared to 30 per cent in 2014, and the Transportation 2040 plan includes all kinds of lofty goals. The two cities are in completely different places on the spectrum of cycling development, but maybe emulating Amsterdam shouldn’t be the goal — at least not in every way.

I love cycling in Amsterdam. It’s exciting — being queen of the road is fun.

But the attitude that enables what people call the “casual” Dutch cycling culture isn’t exportable. All the infrastructure in the world won’t transform Vancouver into Amsterdam, and that could be a good thing.