The day before I caught the Victoria premiere screening of a new IMAX film on the Great Bear Rainforest, a rather barbed tweet caught my eye.

“I made it official folks so can you please stop calling Haíɫzaqv territory ‘untouched’ now.” The tweet’s author, Haíɫzaqv (Heiltsuk) activist and political leader Jessie Housty, pictured herself “touching” a rocky beach in Bella Bella. “If your narrative is about a place that’s pristine, untouched, etc. then your narrative is harmful because it’s undermining millennia of Haíɫzaqv history.”

Housty didn’t name the film, but she didn’t have to. Others in the region were quick to highlight a perennial paradox for explorers and chroniclers of wilder places, which is that places that seem exotic from the outside aren’t the slightest bit exotic to people who — in order to thrive — live and work and “touch” their home territories every day.

I made it official folks so can you please stop calling Haíɫzaqv territory “untouched” now pic.twitter.com/TbbRiNCHpB

“The film’s promotions claiming that the region is ‘untouched’ and ‘undeveloped’ is entirely wrong,” said a post on Facebook. “The Great Bear Rainforest has been the homelands of Indigenous peoples for thousands of years and it is due to their stewardship of their lands that the region is as beautiful and ecologically rich as it is.” It is not, in other words, what a promotional poster bills as “A Magical Environment. Unchanged for 10,000 years.”

Then there’s that other grizzly in the room, which is that a brilliantly filmed and captivating cinematic marvel — and Great Bear Rainforest, Land of the Spirit Bear is all that and then some — is going to make mobs of people want to visit the Great Bear and in doing so, threaten the very thing that draws them there in the first place.

“I struggle with that all the time,” says Ian McAllister, the film’s director. McAllister is a tireless conservationist and a vocal and visual advocate for a region where he’s spent much of his life working life. He’s unconvinced that this region is anywhere near as “protected” as governments and some environmentalists claim it to be, and hopes an awe-inspiring, celebratory and educational film — which is what the IMAX system is purpose-built to display — will inspire a new generation of conservationists and advocates not just in theatres, but in communities themselves.

“At the end of the day, I hope what we’re protecting is the ability of communities to exist, and persist,” McAllister says. “I hope this is an entry point for a much deeper conversation.”

The film itself is a wonder to behold, even if actor Ryan Reynolds’ playful narration is cluttered with adjectives — “primordial … ancient … hidden” — that cloy what is mystical and otherworldly about the Great Bear. It’s better when the images are left to speak volumes, which they do. The wildlife footage is astonishing. McAllister is one of the foremost wildlife photographers and filmmakers working anywhere today, known on our coast for his patient close-up work with bears and wolves, and for hard-earned underwater footage in the kelp beds and reefs along the Pacific shore.

The IMAX format takes his work to a whole new level. “It’s so unlike any other medium, there’s nothing else like it,” he says in an interview. “This was a mind bender, not just for me but for everyone in the business.”

That’s because digital technology caught up with IMAX’s trademark 70mm commercial film format in the past few years. Purists claim digital resolution can’t compete with film, but digital technology allows for smaller, quieter and more adaptable cameras, as with the RED 8k sensors used in the filming of Great Bear Rainforest.

“That technology did not exist until a couple of years before we started this,” McAllister said. But it was hugely beneficial to a shoot in remote areas in difficult weather conditions, especially when the goal was to capture wildlife in the raw. That meant shooting underwater, but also stringing high-tensile cable dollies over rivers, and deploying massive heavy lift drones off the deck of McAllister’s catamaran, Habitat.

The cameras’ remote-control capabilities allowed for extraordinary intimacy with spirit bears, those iconic white-hued black bears of B.C.’s central coast. The Great Bear’s natural wonders aren’t limited to bears — some of the scenes of sea otters, humpback whales, gulls, eagles and surf scoters massing around “one of the biggest buffets on the planet” — the return to spawn each year of Pacific herring — are exhilarating to the point of being hard to believe. But they’re very real — it just took three years and just shy of $8 million to get them up on the an IMAX screen.

Great Bear Rainforest isn’t just a nature film, and nor does it ignore Indigenous inhabitants of the region. In fact, McAllister says he worked hard to include emerging leaders from the Gitga’at, Kitasoon/Xai’xai and Haíɫzaqv nations into the film, people he called “caring, smart young leaders who care deeply about where they are living.”

Hence scenes of Marven Robinson passing down his knowledge as a guide to his 12-year-old son Nelson, whose traditional name, Nu’nuk G’mol, translates as baby spirit bear. Or Mercedes Robinson-Neasloss, a high school student of Kitasoo/Xai’xai descent who has been working as a field technician intern collecting bear hairs for DNA research. Her traditional name, Halulu, translates as butterfly. She says, “I think it’s really important for my generation to learn how to protect the land and our territory for future generations, and it’s also important to learn from the knowledge of older people and their traditional way of protecting the land.”

And then there’s Adejepa Saul Brown, a young Haíɫzaqv political negotiator who, alongside his father Frank, is filmed fishing by harvesting hemlock boughs to capture herring roe without killing the fish. There is “something so elegant and profound about the Heiltsuk relationship to herring,” McAllister says, which is why he fought to have that as the human centre of the film. 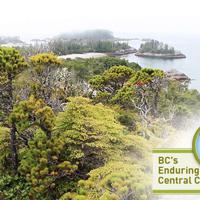 But in the end, it’s mostly a nature film. It’s about 40 minutes long, which doesn’t leave much room to delve into complexities of fisheries or forestry management, oil spills, pipelines, climate change and Indigenous rights. No room to conduct the “longer conversation” McAllister wants to spark though he believes the current media blitz (the film is getting huge mainstream media exposure) positions him well to carry the can for conservation and, along with that, a message that he hopes supports the region’s Indigenous communities. “What they are asking for is self-determination and the ability to protect their own lands and waters,” he said.

As for the hordes descending on the Great Bear, hell-bent on cuddling a spirit bear, Ryan Reynolds has never been to the region and is going to take his family to see it in an IMAX theatre.

“I’d prefer no one go into the Great Bear Rainforest,” he said. “It’s so delicate, so untouched.” (There’s that word again.) “I don’t think it’s our God-given right to run around and sully it. But I do want my kids to experience the natural world I got to run around in as a kid growing up in British Columbia.”