I once sat down at a peace conference beside a serene-looking older lady in a wool suit, the dowdy kind with a skirt and wide lapels. Being young and stupid I thought to myself, “Who is that?”

Then she got up and turned an entire auditorium of women into a cheering mass. She was, in fact, Ursula Franklin, one of the most brilliant scientists in Canada and a force in both the peace movement and for women in science.

I also saw Ursula K. Le Guin read, not that long ago, at a writers’ conference. She too was a small, grey-haired woman with an intense gaze. She read quietly but her words filled my head, lifting body and soul into another universe. She wrote what many consider the best short story of all time, The Ones Who Walk Away From Omelas. If you haven’t read it, drop whatever you’re doing and go find it.

I was fortunate that when Le Guin started publishing books, I had decided to try to become a writer. At the time there weren’t a lot of women writers. I studied creative writing at the University of Victoria, just before they hired their first woman creative writing instructor, and just before a tidal wave of women’s writing burst upon the literary world. We had Margaret Laurence and Margaret Atwood, who had just published her first novel and her first book of poetry. But Ursula towered above, the expanse and breadth of her work defying easy categorization.

I first began reading her because, like many people, I loved her extraordinary series, A Wizard of Earthsea. In the 1960s and ‘70s good speculative fiction was hard to find, and I fell upon her books like a starving person. I was lucky. Her early writing coincided with a tidal wave of new great writing by women, but also a secondary wave of feminist science fiction including the work of Andrea Norton, Joanna Russ, Marge Piercy, Octavia Butler, Sheri Tepper, Joan D. Vinge, Suzy McKee Charnas, C. J. Cherryh, and most especially James Tiptree, who wrote under a man’s name but with female consciousness.

I grew up as a writer alongside Le Guin’s work. Every book of hers had a huge impact on me and opened my eyes to something I needed to know. Reading her meant savouring every word and line and surprise. Her prose was so quietly, forcefully, brilliant. I am not sure if anyone has ever equalled her as a stylist. Even though I tended to devour books in big gulps, I slowed down when reading Le Guin’s work, enjoying the texture and fineness of the prose. Her sentences I could read over and over for the pure pleasure of their elegance, lyricism and power.

I used her book about writing, Steering the Craft, to learn about teaching the basics of creative writing. It’s a small book with a great section on verbs at the back. (Anyone struggling with subjunctive verbs should read the very funny section on verb tenses.) When Le Guin started publishing essays in her later years I realized all over again what an insightful writer she was. She dealt with so many questions that had also troubled me as a writer. I read her throughout my PhD dissertation, when I was both writing a memoir as well dissecting the process of constructing memoir. Le Guin was an honest and complex thinker. She never settled for an easy answer on anything but went straight to the heart of ethical tangles. At the same time her writing was accessible, strong yet playful.

On the surface Le Guin led a life that appeared plain, orderly, and well organized. She married the love of her life, raised three kids, wrote in the morning, and did housework in the evenings. But in her own distinctive fashion she overturned many of the boundaries of what was considered real “nuts and bolts” science fiction — the cowboys-in-space variety with hairy-chested men in space suits, and sexy green aliens with giant boobs bouncing about in zero gravity.

She won almost every major book award available and probably should have won more. Her work, her very existence, served as a beacon and guiding standard for generations of writers for whom she opened doors, lit lamps, and led the way.

Vancouver’s Vancity Theatre, in collaboration with the Vancouver Writers Festival, will screen Arwen Curry’s new documentary portrait, Worlds of Ursula K. Le Guin on Thursday, Sept. 13. The film took 10 years to produce and was partly funded by a Kickstarter campaign that raised $80,000 in less than three days.

Le Guin’s legions of fans and admirers have been avidly anticipating Curry’s film for a while. In addition to insightful and gracious interviews with the woman herself, it also features a pantheon of science fiction and genre writers including Margaret Atwood, David Mitchell, Neil Gaiman, Samuel R. Delany, Michael Chabon, Vonda N. McIntyre, Adrienne Maree Brown, China Miéville, Annalee Newitz and Theodora Goss. Members of Le Guin’s family also contribute their own memories and stories.

It is difficult to make films about writers. If they are serious, writers spend the bulk of their time squirreled away writing and reading. It is a solitary task and craft. Someone once compared writing a book to training for the Olympics. In the process all your friends fall away, and when you finally come out of hiding there is no one there to talk to or celebrate with.

But in spite of their insularity, I love to watch films about writers even if they are rarely brash or even bold. There’s not much to do other than have the writer read, walk down a lonely path, or stand on a beach staring winsomely out at the sunset. Worlds of Ursula K. Le Guin does all of these things, but does so with the quiet strength and ironbound determination that buoyed Le Guin throughout her life and work. 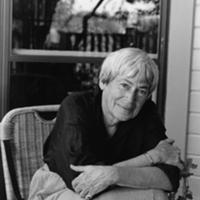 I have savoured almost (I’m pretty sure) every word Le Guin ever wrote, including her not-always-so great poetry. It is a joy to spend time in her presence, although nothing can match the satisfaction of a full-on immersion with a Le Guin book and the experience of utterly disappearing into another world.

I disagree with the film’s conclusion that science fiction and fantasy fiction have changed. I do wonder why every fantasy novel I pick up seems to have elves and dragons in it. Somehow, Tolkienesque elves and dragons or Harry Potter-style series have crowded out what was once a serious attempt to displace the clichés of the science fiction and fantasy genres. Elves and wizards are a lot more cinematic than the highly imaginative worlds Le Guin created, places and cultures that were subtle, complex, and most importantly different from western culture.

That’s the problem with Le Guin. She was just too good. And perhaps too smart for today’s movie world.

The last book I read of hers was a collection of short stories, which I read just after she died last January. Some of those short stories I went back and reread several times, so luminous and insightful they were. I miss her. I have her books, but I miss her quiet, determined, powerful presence in our difficult world.