Vancouver’s documentary film festival turns 17 this year and will run through the first weeks of May, with a rich and varied lineup that puts an emphasis on a world that’s hard to pin down, constantly changing before our eyes.

Maybe that’s trite to say. After all, everything changes. What kind of documentary chronicles sameness? And yet the variety of narratives of change at DOXA is impressive. Whether it’s unpacking the new and possibly tamer face of queer culture, asking how artists’ real lives affect how we read their work, or challenging what it means to exist online, the festival is always grappling with a world — or many worlds — in flux.

In Nova Ami and Velcrow Ripper’s Metamorphosis, we’re treated to beautiful images of the Earth, including breathtaking time-lapse sequences of nature at work.

Proteus, of Greek myth, was a shapeshifter, a narrator tells us. While change is impossible to avoid, Proteus changed only if coerced. The transformation of our world is thus immediately framed in the negative. The beauty that Ami and Ripper present to us is temporary, as we’ve brought on changes that the Earth hasn’t planned for but must succumb to without choice.

Of course halting climate change, if that’s still possible, would require major societal shifts. We can’t keep consuming as we do now, the film tells us at length. Our reliance on fossil fuels alone would require governments with the political will to act. This isn’t an abstract thought experiment. As I write this, a new report from the National Observer suggests the Canadian government was hell-bent on approving Kinder Morgan’s Trans Mountain pipeline regardless of review findings, and the country’s largest city is somehow still debating the merits of bike lanes.

And then there’s the lifestyle piece. Do you own a car? Consume the products of factory farms? Travel? Keep your lawn green or swimming pool full of water in drought-stricken California? These are not sustainable practices.

As direct as the message of Metamorphosis is, it’s delivered in a cleverly fractured way. We jump from Monarch butterflies dying en masse to cyclones in Vanuatu and forest fires in the U.S. This kind of elliptical storytelling pulls us back and forth, telling us that these things are connected, and we’re to blame. The consistency in nature is gone, and if we’re to survive, we have to address that, or at the very least recognize it.

Change takes other forms at DOXA. In Freaks and Geeks: The Documentary, director Brent Hodge, who was at the festival two years ago with The Pistol Shrimps, turns his lens to the failed series Freaks and Geeks, which ran on NBC during the 1999-2000 TV season but was cancelled after only 12 brilliant episodes.

On the one hand, the failure of Freaks and Geeks was a product of its time, but on the other, it functions as a kind of time capsule for a brief moment when today’s A-list stars were just starting to find their creative voices.

Hodge interviews series creator Paul Feig (director of Bridesmaids and Ghostbusters); producer, writer and director Judd Apatow (The 40-Year-Old Virgin, Knocked Up, Trainwreck); and stars including Linda Cardellini, James Franco, Seth Rogen, Jason Segel, Busy Philipps, Becky Ann Baker and Martin Starr. What comes through in these interviews is not only the usual nostalgia for yesteryear but a clear sense that Freaks and Geeks came just a few years too early, right as the television industry was about to experience major shifts and upheavals.

A single-camera comedy, set in the ‘80s, featuring flawed protagonists, without a laugh track, Freaks and Geeks is a clear precursor to some of the best shows of later years, including Scrubs, Parks and Recreation, Arrested Development and more, and it gave career starts to household names. It’s also the kind of show that would kill on Netflix today. 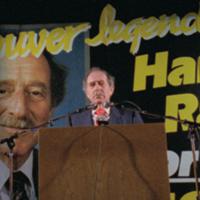 Harry Rankin and the Battle for Vancouver’s Future

In the 1970s, Los Angeles’s Venice Beach hosts a group of roller skaters who meet up and dance, staking their claim on a small patch of public space and drawing increasingly large crowds. Unlike ice dancing, the roller dancing scene isn’t so much about competing as about community. You don't dance for medals but for recognition from the group and to attract an audience. In an increasingly ghettoized city, Venice Beach functioned as a reprieve and space for celebration for the black communities of L.A.

But as Hollywood gets wind of the new trend, we see roller dancing white washed for American audiences. Then the police move in on the young dancers. It’s an all-too familiar sight, as excuses are drummed up to object to a congregation of black people. The music is too loud. The crowds attracted are a safety hazard. None of it is convincing, but it’s enough to drive people out.

Through interviews and archival footage, Hickey offers a sense of the energy at the time, of a movement being built from the ground up, as well as a longing for what could have been. The dancers are still around. Some even still roller skate at Venice Beach. But something changed. Something was lost — or taken.

As with Proteus, change isn’t always voluntary or just.

But then the festival also features stories of positive change, affirmation and revolution. There’s hope in change, and the promise that things can also get better. That’s worth capturing, too.

What else to see

As in previous years, DOXA will screen an assortment of international docs, both feature and short, covering a broad range of topics.

DOXA runs from May 3 to 13 across Vancouver. Check out the full festival lineup and show times online here.