Chances are that sometime between now and Labour Day you will find yourself lolling about on a beach or in a hammock with a book that might just make you a healthier, happier, less anti-social person. 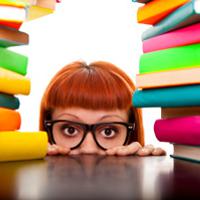 Why Name Contest 'Canada Reads'? Should Be 'Authors Beg'

And how will you know if you've found such a book? Current fashion would suggest you should consult a bibliotherapist.

Everyone needs a hobby, and in honour of the return of old-fashioned "reading cures" I've become an amateur bibliotherapist, or as I like to style it, a Literary Apothecary for the Overwhelmed. Name your ailment and I'll advise you on what to read in order to wrestle with it. The idea being that you can benefit from an encounter with someone who has thought long and deeply about circumstances similar to yours. (Not me. The authors.)

I can tell you that I have a 100 per cent success rate at curing the disgruntled, based on my first client. I discovered my métier a couple of weeks ago when a distressed friend confessed to the toll some prolonged litigation was taking on her. She's up against a defendant with deep pockets who will lose this precedent-setting case provided my pal can stickhandle the thing to court. So her opponent is trying every stalling tactic known to litigators, hoping to bankrupt her before she can get it before a judge.

She's overstressed, over-worked, and exhausted, so her doctor prescribed an antidepressant. Which promptly sent her looking for advice from people without access to drugs, including me.

"Well, Frodo, I think you just have to accept that someone has to haul that bloody ring to Mordor and you are the most qualified one for the gig," I said.

She looked at me blankly. How does the mother of two teenage boys not get a Lord of the Rings reference? Suddenly I knew the solution to her momentary crisis of faith. I sent her off to read Tolkien's trilogy on her summer vacation as both entertainment and a way of thinking about what it means to struggle with an overwhelming task at which you might fail.

My advice is sound, or so my reading tells me. Bibliotherapy falls in and out of fashion, but the notion that engaging with a work of fiction eases psychological burdens stretches back to Plato and Aristotle and found favour with Freud.

The idea has become all the rage again, partly due to London's School of Life making a few bucks by handing out reading tips.

When English Brexit supporters began trumpeting their hatred for the elite, I immediately thought of the School of Life. It's a twee blend of education-lite and entertainment concocted by some well-heeled Oxbridge graduates. If P.G. Wodehouse were still alive, he'd be sending Bertie Wooster's grandchildren there: they make a business of explaining the reason for things like art and philosophy alongside self-help advice.

Those of you with 100 pounds in search of a purchase -- about $171 under the new Brexit-influenced exchange rate -- can buy a consult for a reading list tailored to help you think about your particular angst. Is it a mid-life crisis? Career frustrations? Perhaps it's that vague sense of dissatisfaction I call Modern Malaise.

If your budget doesn't stretch to a personally tailored plan, you can buy the book of over-the-counter advice in the form of a medical dictionary compiled by the school's bibliotherapists, Ella Berthoud and Susan Elderkin: The Novel Cure: An A-Z of Literary Remedies ($25).

The book has a slightly tongue-in-cheek tone I like. But I was disappointed to see few surprises in the roughly 170 recommendations comprised mostly of classics and bestsellers. Where are the hidden gems that go beyond a second year English student's reading list?

And it could give people the wrong idea about literary therapeutics. Lest you dismiss bibliotherapy as another form of New Age Wingnuttery or a gag along the lines of wine therapy, retail therapy, and chocolate therapy, there's some evidence for its health benefits. Legitimate researchers have found that having a regular date with literature can lift your mood, reduce your stress, and help stave off ailments like dementia.

In short, a book a day keeps the Prozac away.

Novels also put readers in someone else's shoes, which encourages empathy and is valuable for socializing people. The simple act of appreciating someone else's suffering is likely to put your own in perspective, making books the ideal therapy for adolescents (at any age).

Still, I worry about the harm that can be done when Puritan-inspired "thought leaders" try to turn literature into social work. I see them as part of that growing anti-intellectual campaign that implies art is obligated to justify its otherwise frivolous existence.

And there's no doubt that enthusiasm for bibliotherapy often surfaces among those who embrace the unholy blend of fundamentalist religion, healthcare, and sales, which in our era expresses itself as New Age thinking.

The term bibliotherapy made an appearance in print as early as 1916, in an Atlantic magazine article, "A Literary Clinic" penned by Samuel Crothers, a Unitarian minister in Cambridge. He was writing about a fellow minister's foray into a form of psychotherapy he had invented: a kind of positive thinking that mined books for upbeat ideas his parishioners might cling to.

"From my point of view, a book is a literary prescription put up for the benefit of someone who needs it," he quotes his buddy Bagster saying. "The true function of a literary critic is not to pass judgment on the book, but to diagnose the condition of the person who has to read it."

Doesn't he sound like a pill? That straight-from-the-pulpit tone is echoed over and over again in much of what is written about bibliotherapeutics. Instead of celebrating the joy of art, proponents tend to obsess on the need for self-improvement. A Mother Jones article about reading cures from 2005 talks about how to organize a book group focused on "moral fiction" with what must be the most painfully depressing booklist I've ever seen. All the characters live in poverty, or endure prejudice, or both.

This is the hazard of letting just anyone direct your reading. And it worried an Australian librarian back in 1980 when book therapy was having a moment in the U.S. In "Bibiliotherapy: A Librarian's Concern," Kathleen Wenger traced the history of this sort of treatment to 19th century hospitals, particularly the sanatoriums that dealt with the mentally ill, and she confessed to being uneasy with the average librarian's lack of formal therapeutic training. She also wanted some evidence for how and why this therapy works.

I applaud her diligence in resisting pseudo-science as it is applied to healthcare, but I don't think she needed to worry about doing harm. Avid novel readers all mention the way books improve their sense of well-being, regardless of what they read. As Ceridwen Dovey wrote in a New Yorker essay about her own experience with bibliotherapy, "Reading fiction makes me lose all sense of self, but at the same time makes me feel most uniquely myself."

Exactly. Which is precisely what most of us want when we're under stress: some ways of shoring up our psyches so we can brave the chaotic world. I actually think this is one of the benefits of art generally, but it's especially pronounced in good literature.

A University of Toronto psychology professor has a theory that explains why reading fiction feels so therapeutic. Keith Oatley suggests that reading a novel is akin to a computer running a simulation: the book gives readers a safe way to experience another world.

"Literature allows not just learning about emotions, but experiencing them, although in a form in which they may be clarified and better understood," he writes in an article titled "Why fiction may be twice as true as fact."

As delighted as I am to see everyone discussing the importance of fiction again, I worry about the emphasis on its utilitarian role. Not just because that attitude makes for bad art, but also because it sets literature on the road to propaganda. I wince every time I see some venal marketer claiming to do "storytelling" in service of yet another dubious product.

As my clients say...

There's no doubt a good read will lift your mood. Here's what my first client says: "I feel rejuvenated. I spent an afternoon on the porch reading and it zipped by as if it were 45 minutes. There was sex AND World War I trench horrors in the same book. Imagine my delight!"

Wait. What? There's sex in Lord of the Rings? I realize I read it at 12, but how did I miss that? Maybe she discovered some po-mo corruption of Tolkien's great work...

It turns out my pal didn't read about the plucky hobbit; she went with Birdsong, part of a loose trilogy of novels about the World Wars by British author Sebastian Faulks. On her advice, I've added it to my summer reading list.

But I'm still claiming a victory for my fledgling Literary Apothecary scheme. She was in that bookstore when she tripped over Birdsong because of me! And she feels better. And I have a new book to read.

Forget the fashions of the moment: I think this is exactly how bibliotherapy ought to work.