In a span of 10 years, Lupita Michel went from selling knives in the U.S. to teaching Zumba in Vancouver. She fell in love, left her hometown in Mexico, and filed immigration papers in Canada. 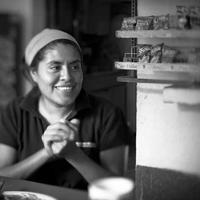 Small but mighty, Michel is a positivity powerhouse. Her energy is contagious and her voice is loud -- qualities she'll use to work a crowd of 100,000 at Vancouver's largest celebration of Latin American culture. She's emceeing the main stage at Carnaval del Sol, happening this weekend in downtown Vancouver.

Apart from her own charisma, Michel has Paola Murillo to thank, executive director and founder of Latincouver, a non-profit organization dedicated to celebrating and supporting British Columbia's Latin American community.

"She is amazing. She has this amazing energy," says Murillo of Michel. "I love her to death." By volunteering with Murillo's organization and its annual festival, Michel gained a foothold in Vancouver, building a community of Latin American newcomers along the way.

During her first year in Canada, Michel was unable to work while her immigration file was in process. One day, while strolling through an event at Lougheed Mall in Burnaby, a colourful pamphlet caught her eye.

"It was bright yellow, like the colours of the Brazilian flag," she recalls. "I saw everything Latincouver was about and [thought], 'Perfect, this is what I want to do... I want to belong to this organization.'"

Michel began volunteering with Latincouver and gained event coordination and sales experience. She worked alongside Murillo, who asked her to emcee Carnaval del Sol for the first time in 2010.

"I feel that when you move to a new country you feel like you lose who you are in many ways, and you just lose your confidence, like you don't know who you are anymore and start from zero," Murillo explains.

Latincouver provides a space where newcomers are able to practice the skills they acquired in their countries of origin. Murillo says this brings people to think, "You know, I'm actually capable to [be] who I used to be. I am an engineer, I am a graphic designer, I am an event planner." For Michel, the volunteer stint helped her score a paying gig, which turned into a successful career in Vancouver.

It was on the stage at Carnaval del Sol a few years ago that Michel received an invitation to launch her own business. Shortly after moving to Canada, her passion for exercise and activity led Michel to become a Zumba instructor.

In 2011, after a whole day of performance, she was offered the opportunity to open up her own dance studio. Michel said yes and opened a Zumba studio along with two friends and business partners.

Although the studio still stands, Michel no longer is a partner. She opted to leave the business to spend more time visiting her parents in Mexico.

She is still invested in Latincouver and has no plans to leave Canada. "I'm excited and happy to be here. Canada has been an amazing home to me," Michel says. "I still want to continue to travel the world, but now this is home, this is mi casa."

The Vancouver Latin American Cultural Centre (VLACC) is another organization working to assist and affirm the presence of Vancouver's Latin American community. VLACC aims to provide a physical space where Latin Americans and enthusiasts can come together to celebrate their culture and heritage.

According to the organization's vice president Lili Vieira de Carvalho, there is an urgent need for a space where Latin Americans can come together. Between July 2012 and 2013, the Latin American community held 162 events throughout the city.

"It's something that will be here for generations," says de Carvalho. "It will always be a conduit or a centre in the sense, a centre for Latin American cultures."

While Latincouver has a focus on business, VLACC aims to focus on culture. "We want to have food being part of the centre, and have a place where you can eat the food, or where you can watch a movie, or you can be part of a course, or you can practice with bands," de Carvalho says. "That's a way of keeping the culture alive for generations of Latin Americans in town."

VLACC is awaiting a cultural infrastructure grant approval from the City of Vancouver. If approved, the group will move ahead with a feasibility study to determine the centre's location.

Murillo agrees that the Latin American community is diverse, but also believes it is a highly adaptive community. "[When] music festivals and fun things and soccer comes, everyone is together so we do get united by events," says Murillo.

"We are a very warm culture and passionate culture, so when we have those parties, music or food or sports, that's when we get very strong and very united," Murillo says. Carnaval de Sol is hosted by Latincouver's staff and 475 volunteers, featuring 60 vendors and over 400 performing artists. The fest runs Saturday and Sunday on Granville Street between Nelson and Dunsmuir.