There's been a lot of activity coming from the Morrissey camp over the past couple of months. The Mancunian pop mopester recently made headlines again over his long-running condemnation of Canada's seal hunt, resulting in a war of words with Fisheries and Oceans Minister Gail Shea over our country's "greedy and barbaric" culling process. 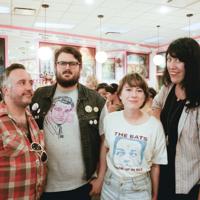 A Bluffer's Guide to Music Waste

The former Smiths singer is also gearing up for the launch of his first new album in five years, World Peace Is None of Your Business. But while his latest will no doubt be filled with smarmy charm on tracks with colourfully morose titles like "Earth Is the Loneliest Planet," "Kick the Bride Down the Aisle," and "The Bullfighter Dies," aside from some live YouTube videos and a couple of spoken word teasers, we're going to have to wait until next month for the album to hit our ears.

Filling the void this week, however, is a newly reissued version of one of Morrissey's highest achievements, 1994's Vauxhall and I. While longtime fans and cynics could cry foul over the 20th anniversary edition of the album -- or maybe mutter a familiar "Re-issue! Re-package! Re-package!" from the Smiths' record company-castigating "Paint a Vulgar Picture" -- people looking to spin the album's "Billy Budd" on their turntable will no longer have to happily lose both their legs just to grab a copy.

There are differences to the new release, though, with slightly altered cover art finding Morrissey's familiar, deep and penetrative gaze resting next to an updated Sans Serif font, as if that mattered. Most oddly, the back cover appears to be anachronistic to the package, presenting a street-set promo photo of Moz with a suspiciously greying quiff. More interesting, however, will be the Live at The Theatre Royal, Drury Lane bonus material, recorded in concert back in 1995.

The main course is, however, the venerable Vauxhall and I. The record gave Morrissey his biggest U.S. chart hit with "The More You Ignore Me, the Closer I Get," an elegant pop jangler laced with sinister lyrics, but it's far from the only track to get buried in your mind's landscape. Starting things off spectacularly is "Now My Heart Is Full," which softens the open-chord Brit Rock pomp of Mott the Hoople, one of Morrissey's formative favourites, while delivering Graham Greene-referencing lyrics about Brighton Rock's young thugs Dallow, Spicer, Pinkie and Cubitt. It makes for one of the loveliest mob anthems of all time.

Elsewhere, the tracklist runs the gamut, from the brooding boom of "Spring-Heeled Jim" to the tender waltz, "Hold On to Your Friends," the album's sadly overlooked second single. "Why Don't You Find Out for Yourself" plays with more record company condemnation, filtering the green-grassed pastoral strums of acoustic guitars and diamond-cut falsetto backups around Morrissey's lines about career advisors who "wanna help you to grow and then siphon all your dough."

"Lifeguard Sleeping, Girl Drowning" may well be one of the most haunting songs Morrissey will ever produce, with its mediaeval "Greensleeves" melody, dozy flute musings, synthetic water ripples and lyrics focusing on an out-stretched arm being sucked beneath the waves. The literal chainsaw buzz of closer "Speedway" cuts just as deep.

Morrissey -- "The More You Ignore Me, the Closer I Get"

Morrissey's long and fabled career has offered up a wide breadth of hits and cherished tracks, but Vauxhall and I should be his legacy. As the man himself noted in his 2013 Autobiography, "The album became the first start-to-finish emotional journey, each track as warm as the last, noise and poetry turned loose in one of those visionary sessions that your future returns will constantly search for."

Chances are Morrissey's already made up his mind over whether World Peace Is None of Your Business measures up to the newly reissued masterpiece, but fans will get to find out for themselves on July 15.