My generation grew up in the 1950s and '60s thinking of China the way young people today think of North Korea: a politically neurotic hermit kingdom, hating the West and immune to reason. Westerners who did penetrate the "Bamboo Curtain," like the young Pierre Trudeau, breathlessly reported on the alternate universe they had visited. 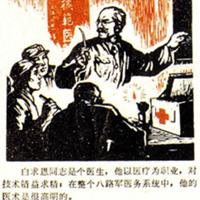 The Redemption of Norman Bethune

When it was my turn to be the innocent in Red China, in 1983, the country simply didn't make sense. Norman Bethune, the Canadian surgeon who died in the service of Mao Zedong, was still revered (and the subject of some very kitschy art). Propaganda posters were daubed on every mud-brick wall. But the Shanghai airport had big ads for imported cognac, and in the lobby of Beijing's posh Jianguo (Build the Nation) Hotel, a pianist played the current hit "Midnight Blue."

My cognitive dissonance was due to a mistaken assumption that proletarian isolation was China's status quo. Such spells are actually rare in its history, and by 1983 China was making up for lost time.

As Odd Arne Westad's excellent book argues, China has always been interested in the non-Chinese world, if only to teach us barbarians the superiority of the Chinese way. My reason for being in China, as a "foreign expert" English teacher, was thanks to China's reversion to its pre-1949 policy of learning all it could from the outside world.

Westad, a professor at the London School of Economics, clearly knows China's history and its relations with its neighbours. In the 17th century the Manchus stormed in and overthrew the Ming dynasty. The Qing dynasty then had to deal with Central Asian Turks, Tibetans, and blue-eyed northerners called Russians. Other peoples paid tribute to Beijing. The Russians got treaties that pulled China into the emerging global economy.

The next couple of centuries saw the Qing in control of the biggest, richest, best-educated empire on the planet. The West soon saw China as an opportunity for incalculable wealth. When a British embassy arrived to offer trade in 1793, the Chinese had every reason to tell the Brits to go away. Some mangy little island in the far west had nothing to interest an empire that had it all.

The mangy little island did have opium, however, and pushing dope helped to pay for Britain's addiction to tea imported from China. Recognizing the damage opium was doing, the Qing tried to stop the trade, and found itself in a long series of losing wars.

Westad makes it clear that the Qing did not try to hide from the world just because the West outgunned it. Repeated waves of emigration created a Chinese diaspora from Singapore to Barkerville to Havana, while waves of students headed for western universities to learn how to resist the endless pressure of the European empires.

The shock of the foreign

Foreign ideas were penetrating even more effectively than opium. Christianity was one, and it inspired a mentally ill young Chinese to declare himself the younger brother of Jesus. The Taiping rebellion that followed in the 1850s and 60s convulsed the empire and cost twenty million lives. Communism, another European idea, would convulse China again and cost even more.

The Chinese soon found a surprising affinity for the United States. Both were continental empires, expanding to distant geographic limits. Each was multi-ethnic but dominated by a single ethnic group -- the Han in China, the Anglo-Saxons in the U.S. Each dominated its neighbours yet was remarkably self-absorbed.

American political ideas fascinated the young Chinese returning from Yale and Harvard, and they struggled to frame those ideas in a Chinese context. With the fall of the Qing in 1911 (partly funded by donations to Sun Yat-sen from the Chinese communities of Vancouver and Victoria), the new Republic of China tried to modernize. Investment flooded in, but so did Japanese troops.

Westad argues that Mao's victory over Chiang Kai-Shek in 1949 was an unlikely turn of events; Stalin had even instructed the Chinese communists to cooperate with Chiang after the war. The communists won, in effect, "because they made fewer military mistakes than the government."

"But the new regime," Westad says, "set out to destroy China's links with the rest of the world in a comprehensive and deliberate manner, believing that its rule would never be safe as long as any major foreign influence, outside the Party's Soviet links, remained in China."

And even the Soviets, for all the help they supplied in the next decade, were regarded as potentially dangerous influences on the Party. So Russian advisers were effectively sealed off, like Dutch traders in Tokugawa Japan, from all informal contacts with the people they were helping.

Once Mao broke with the Soviets, Westad says, China became "what we today would call a failed state, a chaotic, self-referential, and extreme polity with few links to the outside world" -- very much like today's North Korea, but vastly larger.

Hence my generation grew up seeing China as a kind of insane parallel world, an empire of dehumanized "blue ants." We knew almost nothing about it, so we feared its strength when we should have recognized its weakness. When China tested its first nuclear weapon in 1964, Very Serious People argued for bombing its nuclear facilities, just as some call for attacks on Iran today. We are lucky no one acted on their appeals.

Despite Richard Nixon's trip to Beijing in 1972, the political convulsion of the Cultural Revolution continued until Mao's death in 1976. Then, rather than die of its own self-inflicted wounds, Chinese communism brought Deng Xiaoping out of disgrace and into power -- and Deng cautiously opened the country up to the foreign influence Mao feared.

I saw the early signs of that influence in 1983, not just in the cognac ads but in the bamboo scaffolding going up around the new office towers in the Special Economic Zone of Shenzhen, next door to Hong Kong. I saw it in the campaign against "spiritual pollution" that warned my Chinese colleagues not to get too fond of foreign ideas -- and foreshadowed Tiananmen Square six years later.

And I saw it most in the western merchants in the Dongfang Hotel in Guangzhou, frantically trying to figure out how to exploit the opportunity Deng had offered them. If Mao had supported "socialism with Chinese characteristics," his successors promoted an equally Chinese form of savage capitalism.

Thirty years later, Chinese wealth drives everything from the price of iPhones to the fever dreams of Alberta's oil industry. Every school in the B.C. wants more Chinese students, and every tourism operator hopes for more busloads of Chinese tourists. China looks more American every day: powerful, narcissistic, and oddly insecure.

While the U.S. political system deteriorates before our eyes, no Americans are seriously discussing a new system. But Westad argues that the Chinese know very well they can't continue even with the "authoritarian lite" regime they've developed in the past 30 years.

He points to four models that Beijing is looking at with respect: Singapore is clean, orderly, prosperous and non-democratic. Hong Kong and Macao, while back under Beijing's rule, operate on their old colonial systems with free speech and freely elected governments. Taiwan, the old enemy, is now a major investor in the mainland and another prosperous democracy.

Beijing's restless empire now wrestles with how to achieve similar political structures on an imperial scale -- keeping its eastern regions prosperous without losing its Turkic, Tibetan, and other restless minorities. It can't reject the outside world again. But the Chinese understandably fear that some dangerous idea from outside will again induce a national convulsion -- one that could this time be fatal.