It's no accident that when Patrick Condon came to write a book about cities and sustainability, one of the places he wrote about was his hometown of Brockton, Mass. 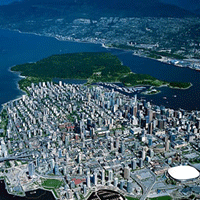 The Trouble with Paradise

"The city of Brockton that I grew up in was destroyed by the forces of unbridled sprawl, no doubt about it," he says. "And that's been an ongoing tragedy in my life. Every time I go back to visit my relatives it just breaks my heart to see what's happened."

Condon is a professor at the University of British Columbia and holds the James Taylor Chair in Landscape and Liveable Environments. His latest book, Seven Rules for Sustainable Communities: Design Strategies for the Post Carbon World, is kind of a self-help guide for the planet, laying out seven interconnected steps to a more sustainable world.

Today, The Tyee begins a series of excerpts from this book.

In Seven Rules, Condon argues that the way we build our cities accounts for much of the damage we are doing to the environment. Dealing with the threat of climate change means changing our cities, he says.

"It's altogether clear that the way we make our buildings and the way we arrange them, one in relation to the next, is responsible for at least 50 per cent of the greenhouse gas production currently," Condon says. "Therefore we could easily cut greenhouse gas per capita consumption by that amount and probably a lot more if you really pushed it.

"I think that's an important thing for people to understand, that planning decisions have that kind of impact over time."

Shape of cities key to sustainbility

In the book, Condon shows how the kind of urban sprawl that killed Brockton, Mass., has been repeated across North America. In the second half of the 20th century, freeways and cul-de-sac suburbs created an auto-dependent society that has contributed greatly to global warming.

But if Condon's past is tied to the worst of urban planning, Vancouver, his home since 1992, is an example of how things can be done right.

The Vancouver region has escaped the worst consequences of sprawl, he says. More people are taking transit, more people are living downtown, fewer people are commuting into downtown.

"It's been joyful for me to participate to some extent in the collaborative effort to help that happen," he says.

That said, many areas of the Lower Mainland are no strangers to sprawl, and given the population growth forecasted for B.C., the guidelines in Condon's book are likely to be useful for this province's city planners -- and engaged citizens -- wanting to design the best possible communities.

Condon says he tried to simplify sustainability, something he believes is often overly complicated.

While the way cities are physically arranged is the most important challenge to sustainability, discussions too often tend to focus on smaller parts of the puzzle, such as energy use or recycling, Condon says.

The seven rules were inspired by self-help books, he says.

"It really occurred to me that there was a communication challenge around how to get this information out to people in a way they could digest. It didn't take a genius to figure out that a lot of books are effective in solving that problem by packaging their information in the form of rules to live by...

"I thought, gosh darn it, why can't we do the same thing for citizens and officials and developers and the whole cadre of individuals who are currently struggling with trying to figure out how to fix this problem."

Climate change is a crisis and time is running out, Condon says.

"And there are ways to do that. And they're not that complicated. But it will take time and it will take consensus in order to get that done."

Seven Rules is a comprehensive guide to how to save the planet by building communities sustainably, with numerous informative charts, tables and illustrations. The Tyee's excerpts merely offer a sampler of Condon's thinking. Readers who are intrigued by what they read here will be well rewarded by absorbing the entire book.