According to Guujaaw, president of the Haida Nation, focusing on the individual is not the Haida way. Hereditary chiefs, elders and citizens of the Haida Nation direct the work of this well-known leader, as well as the work of countless others. So how he ended up as the main character in a new book about Haida efforts to reclaim control over their home archipelago, Haida Gwaii, is vexing to the charismatic artist, drummer and long-time activist. 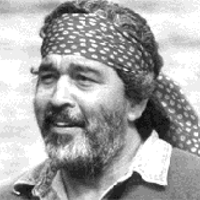 But for Ian Gill, author of All that We Say is Ours: Guujaaw and the Reawakening of the Haida Nation, his subject's reluctance to be written about is the only regrettable part of chronicling what he hopes will be a new chapter in Canada's history.

Gill, who is the executive director of EcoTrust Canada and a former newspaper and television journalist, has been paying attention to the relationship between Canada and aboriginal people for 25 years. Originally from Australia, the gravelly-voiced Gill -- who wrote of his personal travels on the islands in Haida Gwaii: Journeys through the Queen Charlotte Islands -- first encountered the area while writing what became a front-page Vancouver Sun story in 1987. It was about a federal and provincial agreement to create a new national park in what was then known as South Moresby.

The battle to save this spray of islands and mountain ranges from logging went on for more than a decade and culminated in blockades that saw Haida elders arrested by RCMP members, some of whom were Haida themselves.

But in the end, 140,000 hectares of prime wilderness in the southern half of Haida Gwaii were saved and a new level of Haida activism was unleashed. Since then, the Haida have been involved in one of the most important aboriginal law battles in Canada, resulting in the requirement that the provincial government consult and accommodate aboriginal interests where rights have not been extinguished.

After further struggles with logging companies, a provincial land use planning process and more blockades, more than half of the land mass of Haida Gwaii is now protected, much of it in areas that will be co-managed by the council of the Haida Nation and the province.

In addition, the Haida have negotiated a more responsible forest management regime that considers fish, wildlife and communities. Furthermore, they've secured their own forest tenure from the province and have their sights set on buying the largest Tree Farm License on the islands -- TFL 39. They have entered into business agreements with NaiKun Wind Farm, which could be lucrative for the Nation, if the wind farm passes all of its environmental assessments and is seen through.

For the executive director of EcoTrust, an organization that focuses on creating a conservation economy along B.C.'s coast, this is heady stuff.

"I simply don't know of any other First Nation that is prepared to offer such a provocative challenge to the status quo, and to do so in a way that is constructive but utterly unyielding at the same time," he says in an interview posted on Douglas and McIntyre's website.

Gill writes in his acknowledgements: "I think it is also important to acknowledge that Guujaaw has expressed dissatisfaction with this book, which I regret."

Haida Gwaiians can be pretty touchy about how they are portrayed in books. Some locals called for a ban of Gill's travelogue about Haida Gwaii because of an insulting tone he used when writing about the village of Port Clements. Around the same time, another book by an outsider was frowned upon by the council of the Haida Nation — Robert Bringhurst's A Story as Sharp as a Knife.

Asked by The Tyee whether he thinks this book might be banned too, Gill mused, "I've no idea. I think that, having taken the amount of time I did and what I consider to be a great deal of care -- including feedback from anonymous readers on the islands -- the book is much stronger.

"People thought I took a couple of cheap shots [in the other book]. They were probably right. I don't think there are any cheap shots in this book at all. Others may see it differently."

During our conversation, here is what else Gill had to say...

On why he wrote 'All that We Say is Ours':

"I've been coming back and forth to Haida Gwaii for a quarter century now and I have been fascinated and beguiled by the place, as most people have. But it's been a slow dawning about how important the story of what the Haida have been trying to do is. It's a story that in some ways hasn't been told, and that should be told.

"I'm not pretending to know [Haida Gwaii's] story better than [the people of Haida Gwaii] know it, but I am offering a context for the story that maybe isn't known to everyone.

"For example, the blockade on Lyell Island in the mid 1980s -- this is not a new story and it has been told in other places. [The blockades eventually resulted in Canada's first co-managed national park, Gwaii Haanas National Park Reserve and Haida Heritage Site]. But what is interesting is this was happening elsewhere as well -- on Meares Island and in the Chilcotin for example.

"I was able to offer context for the things the Haida have done. It's not just a Haida story. It's of international importance.

"If the Haida Title and Rights goes ahead, you can be certain it will be talked about around the world. That's why it is an interesting story and it takes someone with an outside view to write it."

On his reluctant subject, Guujaaw:

"It's important that it not be seen as a biography of Guujaaw. I'm not a biographer and he resisted the notion of a biography. It's important to note that he didn't seek this out. He has been very sensitive to the notion that a book written about just him would be the wrong thing to do. [What has happened over the years on Haida Gwaii] is not just one heroic lonely person saving the planet. It is the work of all the Haida people. But the reality is that you can't write about what the Haida have done without talking about Guujaaw."

On first reactions by locals who saw early drafts of the book:

"I got feedback that was sometimes quite hostile... [Local readers] were not happy with the way I characterized things... I heard and responded to that feedback.

"But will it please everyone? I hope not. My role is not to travel the globe and apply soothing oils to everyone and everything. What the Haida are doing is extremely provocative and some people will find it provocative.

"The other tough thing with a book like this is there is a lot left out. There is way more happening with the Haida people than what is in this book. But it must pass a coherence test at some point. By definition something like this is extremely selective.

"I hope it's received as it is intended -- as a book that pays great homage to the Haida and non-native people on the islands."

On the role that non-native people of Haida Gwaii have played in the changing power structures over the years:

"The people on the islands support [the Haida] in a way that is quite unusual for non-native people in other parts of rural Canada. I'm thinking of Port Clements and the Protocol Agreement and them supporting the Supreme Court case. That's not a common thing in Canada -- rural resource people siding with indigenous people. Signing on to the court case was a singular act of courage. But that is not to brush over the fact that there are still plenty of skeptics [on the islands] and rightly so."

On why watching Haida Gwaii is so important:

"The next interesting book to be written is about [this question] -- having protected so much of the land and resetting the dial on what in means to be an indigenous community with control of resources, what can the people of Haida Gwaii do with that?

"There is not a final point to be arrived at the end of the book. Some would say the work ahead is the hard part. And people around the world are looking to Haida Gwaii to see how the leadership there emerges.

"Indigenous people still occupy one quarter of the world's land surface. And they comprise 90 per cent of the cultural diversity of the planet. They steward 80 per cent of the biodiversity of the planet. What happens in places like Haida Gwaii is the difference between succeeding and failing. If we are going to figure out what it means to have a society that respects biodiversity -- places like Haida Gwaii are where all this stuff is going to get figured out. It's not going to be companies or universities, and its sure as hell not going to be governments that figure it out."

On the most important thing he wants readers to get out of the book:

"I hope it helps them understand just how dishonest our government has been with indigenous people. It's an important story.

"There is a different society within our grasp that is exemplified by what the Haida propose for the islands.

"It's not like this is a recipe book with ingredients and society emerges at the end as a perfectly baked pie. There will be mistakes and it will be messy because these kinds of things are always messy. It's about a society reclaiming place and reclaiming society."