Maryam Najafi's debut feature film receives its North American premiere this week. Kayan, the story of a Lebanese businesswoman trying to hold everything together as debt, love and life in general spirals out of her control, was made on a shoestring budget with non-professional actors in Vancouver. 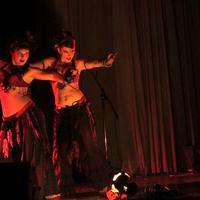 You Call That Belly Dance?

It's a strong first feature with some heavyweight credits: shot by Farhad Saba, the renowned Iranian cinematographer who filmed Kiarostami's Through the Olive Trees and produced by Amir Naderi, director of Cut and The Runner.

So it's a surprise when Najafi says she has almost given up on Canada. Until, that is, she explains why.

She immigrated to Vancouver in 2000 with her family and studied film at the University of British Columbia. She decided to spend a year in Spain after graduation working in post-production, hoping the experience would put her in contention for an entry level job when she returned to the West Coast.

But after she sent off her resume to "everyone in town" and received zero response, she decided to test out a nagging theory as to why.

"I changed my resume and sent it out again," she says over a coffee in Gastown.

She started by anglicizing her name. "I took out a lot of my work experience -- everything I had done in Iran and the United Arab Emirates, when I lived there. I took out that I speak Arabic and Persian… Basically, I cut my resume in half and sent it back to all the same places."

Seventy per cent called her for an interview. None offered her a job. "Afterwards, I really wished I had filmed the whole thing. It would have been great. I could have called it, This Is Canada."

Fast-forward a few years, after Najafi set up her own production company, earned her Master's in Fine Arts by travelling back and forth to San Francisco, and won the "New Currents" award at South Korea's 2012 Busan Film Festival for her debut feature film, Kayan, at its world premiere (by a jury headed by the Hungarian auteur Bela Tarr).

Back on home soil, Kayan, an award-winning film set, shot and edited in Vancouver, is turned down by the Vancouver International Film Festival.

"It feels good," smiles the 32-year-old director. "A bit overdue, but it feels good."

If she feels slighted by the festival, she has every right to be: Kayan is a promising debut feature set in a Vancouver community all but invisible onscreen, and it's baffling that it wasn't one of the films picked to represent B.C.

It's ironic, perhaps, that the idea for the movie itself came out of a sense of cultural isolation within Vancouver, a city, Najafi says, that operates in a sequence of separate bubbles.

Depressed when a previous film project fell through, she had taken to smoking shisha, the molasses-flavoured tobacco. A friend told her about a restaurant upstairs in a mostly medical building on West Broadway called Kayan, one of the few places in Vancouver where it was served.

What Najafi discovered was a space that was much more than a restaurant: a place where students and immigrants of Middle Eastern origin gathered daily. Part social club, part community centre, part refuge.

She spent more and more time there, became friends with the owner, Oula Hamadeh, and, over the course of a year, came to realize that she had the basis for a movie set right there, within the restaurant's walls.

'Kayan' director Maryam Najafi: 'What's frustrating about the films that come out portraying the Middle Eastern community is that they don't capture the full rainbow.'

"I just started observing the people," she says. "They would arrive after work or school and they didn't interact with anyone else outside. Especially people here as ESL students from Middle Eastern countries. They had no other interactions with people from other communities -- either Canadian or non-Canadian. That really shocked me."

With a minimal budget, Najafi knew she would be working with non-professional actors. She handed out flyers around North Vancouver and put ads in the Persian press for anyone interested to attend open workshops she held for three months before filming began.

The only cast member she didn't bring to the workshops was Hamadeh.

"I knew Oula was perfect," she smiles. "Without her, I wouldn't have developed the story in the first place. She is a single mom with two daughters, and I told her I wanted to build the story around her, that I would embellish some things and add new elements."

Though she was worried that Hamadeh might balk at the idea of playing a version of herself in a movie, in her own restaurant, with her own daughters, she didn't need to be.

"It turned out her sister is a famous soap opera actress in Lebanon, and she always wanted to act, but she never got the chance."

She certainly grabbed this one: Hamadeh's performance as Hanin, a middle-aged woman struggling to keep her business afloat, look after her kids and manage an increasingly doomed love life, is pitch perfect. The effort of saving face is etched into her features; the relief when she kicks off her stilettos at the end of the night, palpable.

Hanin's lover, Fouad, is never seen on screen, just a disembodied voice on the end of a cellphone.

"For a woman like Hanin, who already has so much on her plate, a dysfunctional relationship is just another thing she has to handle," explains the director. "Showing Fouad would just lessen Hanin's place in all of this."

Najafi says it was natural for her to build a film around a strong, independent woman, reminiscent of the women she grew up around, both in Iran and Dubai. She was also conscious of creating a fabric of diverse characters, she says.

In Kayan we see a belly dancer -- the epitome of sexuality while performing -- running in late, clutching her baby, the beginnings of a lesbian relationship between two staff members, and a young single mother drowning her sorrows every night in the bottom of a glass.

"What's frustrating about the films that come out portraying the Middle Eastern community is that they don't capture the full rainbow," she says. "They don't get all the colours."

The diversity of ethnicity is also something Najafi seeks to highlight, pointing out in the subtitles when either Farsi or Arabic is spoken.

"When you look in from the outside, you might think that these people are all from the same place, but I wanted to clarify that there is diversity," she explains.

It's a decision that has brought criticism. "There is a hierarchy between Middle Eastern countries and how they perceive each other. The first question the Persian community asks of me is, ‘Why did you make a film in Arabic?' They find it almost offensive. They think that, as an Iranian woman, I should have had an Iranian lead character."

With potential projects in Iran, Turkey and Dubai (the latter a love story between a Korean businesswoman and South Asian worker), it doesn't sound like Najafi will be conforming any time soon.

She shrugs. "For me, nationality doesn't really matter so long as I connect with the story."

Kayan screens at the Vancity Theatre from Friday, March 28. Check viff.org for times.