A self-titled album at the start of a music career is seen as an introduction. Choosing to go the eponymous route a few albums in, however, produces something a bit trickier to pin down. In a sense, the new self-titled LP from St. Vincent (aka cerebral art-pop crafter Annie Clark) is a rebirth. 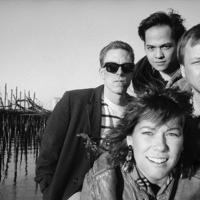 Coming from a business standpoint, it's her first record for her new major label home of Loma Vista/Republic, following the last three releases for iconic indie imprint 4AD. It's artwork likewise presents Clark in a new light, backing up from the up-close-and-personal portraits of her previous album covers to show her in what looks like an abandoned '70s sci-fi film set, seated in a post-modern soft pink throne with her hair twisted and contorted into a shock of white frizz.

Musically, however, this isn't St. Vincent pushing the reset button, but refining the eccentric nature of her three prior solo LPs into a near-perfect odd-pop package. The crackle of a broken keyboard is the first sound to filter through the speakers on "Rattlesnake," a track the quickly ramps itself up into a funked-up celebration of Clark's famously searing guitar licks, with lyrics questioning a decision to run around the desert au naturel when there's clearly wildlife slithering nearby. Likewise dialled into snaking fretboard activity, the danceable nature of the set continues with "Birth in Reverse," aided by Dap-King drummer Homer Steinweiss' simple but energizer-juiced one-two pound.

With writing sessions for the album starting just days after Clark wrapped up the tour cycle behind her Love This Giant collaboration with former Talking Heads leader David Byrne, it should be no surprise that some of the massive brass hysteria that marked that collection shows up on St. Vincent. "Digital Witness" is a natural successor, flinging art-funk horns behind Clark's tuneful chewing out of the image-obsessed Instagram Age ("If I can't show it, you can't see me/What's the point of doing anything?").

Not all of St. Vincent's high points are high-energy, though. "Prince Johnny" is a slower number recalling the love-geared "Marry Me" ballad from her debut LP of the same name, though this time the track shoots straight to the heart with its digitized faux-choir and verses weighing in on politics and privilege. The gosling soft synth ballad "I Prefer Your Love" hits closer to home as a song dedicated to Clark's mother, who had then been battling illness (she's since recovered).

Clark's previous albums have all had more than their fair share of highwater moments, but St. Vincent synthesizes the best parts -- the whirlwind of guitar histrionics and classic Hollywood film score sounds of Marry Me and Actor, the emotional rawness of Strange Mercy, and the unquestionable groove of Love This Giant -- into a fully realized masterpiece of modern, if skewed, pop music. It's her grandest statement yet. This is St. Vincent.