There are two discussions surrounding much-hyped Copenhagen quartet Iceage, and they present the young act in completely different lights. With the band's sophomore LP You're Nothing arriving last month on venerable indie label Matador Records, the first is obviously about the band's music. And by all accounts, the album's a hit, drawing golden reviews in major publications like Pitchfork, Spin, and Rolling Stone for its violent yet vulnerable blending of early '80s hardcore and the darkest corners of post-punk. 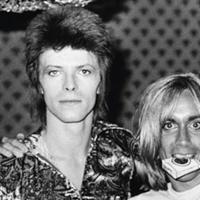 Bowie and Iggy, Circling Each Other

On the flip side, the launch of the new album also has critics resurfacing allegations that Iceage has flirted with loaded, racist iconography. Back in 2011, just after the act's debut New Brigade made waves, an anonymous blogger pointed to a controversial series of drawings vocalist Elias Bender Ronnenfelt had done for a zine called Dogmeat. Some of the images featured iron cross-adorned Klansmen stabbing a person, while others displayed angry, armed skinheads and a giant-sized switchblade pointed towards hooded Islamist terrorist figures. The singer explained that "the drawings were scenes of Western views on racism, but a lot of people who saw them pushed the wrong button and said I'm pro-racism."

Iceage faced more criticism over the video for "New Brigade," which featured the then-teenage band members lighting effigies, smoking bongs and goofing around in pointed hoods (albeit red and black ones). It also shows off guitarist Johan Surrballe Wieth's tattoo supporting English neo-folk project Death in June (a group who experimented with Third Reich imagery, but denied a pro-Nazi slant).

While Iceage denied the implications in the Danish press at the time, Brisbane-based blog Collapse Board has brought the issue back to the forefront. Just ahead of the release of You're Nothing, the blog pointed to band members having worn buttons promoting famously right wing Norwegian act Burzum -- driven by the proudly racist convicted murderer/church arsonist Varg Vikernes. It also highlighted a video from 2011 of a record release party in Copenhagen where some fans mix raised fists with sieg heils.

The publication also tenuously tried to connect the dots between the band and Denmark’s right wing, anti-Islamic, anti-immigrant Danish People’s Party by printing inflammatory, unrelated and unattributed comments from party politicians. While Collapse Board never fully commits to calling them fascists, it poses that the band is certainly flaunting dangerous imagery, and thus, "Either Iceage is filled with a bunch of racists, or a bunch of idiots."

The act has had to speak out again on the matter, ultimately denying it has a racist bent. "Of course it is unpleasant to be accused of something so harsh on such shallow grounds, and to be accused of being something we ourselves have only resentment towards," Wieth recently told The Guardian. "But then again we know who we are, and the people around us that we care about know who we are, and what we are not."

Other recent interviews had band members decrying the sieg heils, and noting that their "New Brigade" video was intended as cartoonish, not an endorsement of the KKK. "It's important to take the power away from symbols," Wieth explained to Vice.

You're Nothing, meanwhile, doesn't lay out the sort of manifesto detractors are hoping for. The band has explained that its music isn't political in nature, and tracks like recent single "Coalition" focus, rather, on alienation and personal relationships ("These days I'm numb and faded/Something denies coalition with you"). "Morals," which builds its motif around the melancholic march of Italian pop singer Mina's 1960s number "L'Ultima Occasione" before hurling into a ramshackle chorus, likewise seems concerned with matters of the heart, heading inward when Bender Ronnenfelt cries out on its betrayal-minded back section, "Where's your morals?"

Even so, a stigma has been placed on the outfit in part due to eyebrow-raising decisions like frontman Bender Ronnenfelt repping an album by Nationalist Socialist black metal band Absurd in an early interview. Wieth argued in The Guardian, however, that they should not be judged because of the music they've listened to, or the art they've ingested, noting that taking an interest in "the depraved" isn't in itself a bad thing.

Indeed, many of the allegations against the group have been inferred by-proxy, and Wieth and his cohorts certainly aren't the first musicians to fiddle with murky political imagery and associations. But like David Bowie, Joy Division, Marilyn Manson, Motorhead, Siouxsie Sioux, Slayer and others before them, Iceage is currently in the hot seat. Wieth ultimately concluded: "One should think carefully about speaking publicly about offensive music and literature, because one might then someday be held accountable for the actions of these stupid people."