There's a lot to eyeball in Robert Fougère's shared art space, if given the chance to look around. 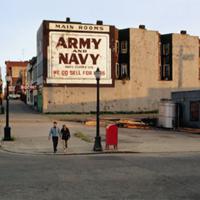 First off, you'll notice the piles of sawdust, a collection of bandsaws, and woodwork projects in progress in the shop, tucked neatly at the back of the East Van brick building. The view, overlooking a tranquil and expansive train yard, is breathtaking on a clear afternoon. Even more stunning, however, is Fougère's collection of nudes. For years now, the local photographer has been amassing a collection of vintage negatives he's found in junk bins or through online film archive sales of women in various candid and quirky states of undress.

It's two days before the artist's Wistful Thinking show opens at the Waldorf Hotel's Black & Yellow gallery on April 5, and he has dozens of black and white prints strewn about a table to choose for inclusion. Among them is a shot of a nubile brunette seductively entangled in a sinewy hammock; another pic has a fit, topless blonde with a toothy grin playfully splayed out upside-down across a staircase. There are several reasons Fougère enjoys reproducing the erotic artefacts, which can be traced as far back as the 1930s. The biggest one, perhaps, is that he's not currently in a position to conduct his own nude shoots in the flesh.

"I like nude photography but I can't really take my own, artistically, because I'm engaged to be married, and it just doesn't jibe with the family values," he says through a bashful smirk.

Walking around the workshop, the towering but soft-spoken artist explains how he's reached this point in a still-developing art career. He only started shooting four years ago after joining an extracurricular photography club at UBC, where he's currently striving for a masters in pharmacology. As he tells it, he "spent two years carrying a camera everywhere and taking pictures," making a name for himself locally taking promotional band shots for publications like Discorder, and taking commissioned portraits on the side. A chance find at antique shop Space Lab, however, had the photographer rethink the possibilities of his medium.

"I had a total eureka moment," the shooter explains. "I was in the junk shop and saw an envelope of negatives [and realized] I can print these. Not that many people have dark room access, it's a dying craft. So I totally picked up on it."

"I like the natural aspect to it. It's not naive, but it's a lot more wholesome," he says of his selections. Grabbing a particular shot of a pantsless, black-rimmed glasses-sporting lass wearing an opened polyester blouse, he notes, "You've got a totally healthy girl, weight-wise. She's smiling. There's boobs hanging out, but it's not spread-eagle profanity."

There's more to Wistful Thinking than coy erotica, though. According to the artist's statement, the show aims to offer a "glimpse of post-war optimism, values, furniture and hair-dos, calling to question current post-silicone cultural values, norms and aesthetics" through both found and original photographs. Long story short, it means Fougère gets to show off the oddball prints he's encountered over the years.

"I have a lot of really obscure and bizarre images that are haunting, like a soldier wearing a gas mask. I have a mock execution scene from the '30s. As haunting as they are, they still have this beauty to them."

Some of Fougère's off-kilter originals, meanwhile, include portraits of cats, a man dangling out of a dumpster, a snap of a bull terrier caught urinating on the side of a building, and two massive, symmetrical profile shots of a bushily-bearded friend replicating the album cover of indie-folk icon Bonnie "Prince" Billy's 2003 set, Master and Everyone. 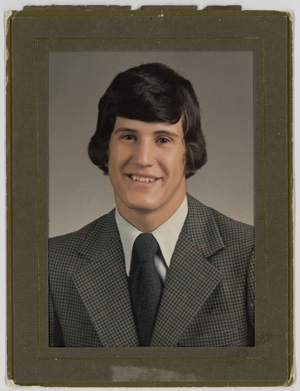 Portrait of the artist's father as a young man.

Fougère's favourite piece mixes both the found and personal aspects of the show. He proudly unveils a large reproduction of his father's high school graduation picture from the early '70s. The artist has cherished the shot for years, and is using the picture to anchor his nostalgia-laced showcase.

"I'm 30 years old, and I remember having it from the age of 18," he offers while marveling at the family photo. "I had it pinned to my wall for the longest time; you can still see the pin hole at the top. And there's paint splatter from the time I painted my apartment."

The likeness between the two men is apparent, though the son's current do is more conservative than his dad's once-lengthy, Prince Valiant-styled mane. There's just a touch of grey dashed into the younger generation's haircut too.

On top of the shots from Wistful Thinking casting a backwards glance at a perceived more innocent time, Fougère chose to present his pictures in a retro way as well, using the heavily-lacquered, thrift shop feel of wet-mounting for many shots.

"I framed the entire show myself using a lot of non-traditional or contemporary styles," he furthers. "The wet-mount is a dated, 1970s way of presenting work. It's kind of intentional because I wanted to show my affinity for the back-to-basics movement: a rejection of the false promises of the city and mass-produced art."

The interview wraps with Fougère admitting he still has a lot of work to do. At the back of the art space he has a pile of prints he's still hoping to mount and frame, with one possibility being a bare-chested self portrait of himself on a sailboat off Boundary Bay, proudly holding up a dogfish he just caught. Another shot sitting in the pile straddles the photographer's sensual side, presenting a bare-bottomed beauty walking into a misty hot spring in Skoocumchuck. The picture, however, is just a little too personal to make the grade.

"That's an ex-girlfriend," he laughs before upholding his personal standards, "so it probably won't make it in."