Grizzly Bear's last two albums, 2006's Yellow House and its stunning 2009 follow-up Veckatimest, showcased how much the Brooklyn band, formerly the solo project of Ed Droste, coalesced as a unit. 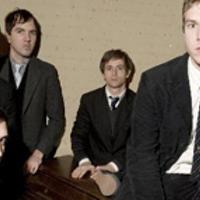 In the Name of Love, Sort of

Tracks like "Two Weeks" had the soft and sonorous tenor vibrato of de facto leader Droste meshing with the exquisite falsetto of bassist Chris Taylor, who also added gorgeous layers of soundscapes to the mix. Guitarist Daniel Rossen, meanwhile, added touches of folk and old time cinema soundtracks to his compositions, while appropriately named drummer Chris Bear delivered his stunningly accomplished, jazzy percussion work behind it all.

Truly, the band's sound was a sum of its parts. It's troubling then, though not aurally displeasing, to learn that Rossen has delivered many of the group's tricks on his own for new solo EP Silent Hour/Golden Mile.

The five-song quickie, released this past Tuesday through Warp Records, gets off to an understated start via the staccato acoustic guitar of "Up on High." Rossen may sing about a big empty room where he finally feels free, but it's not long before the arrangement gets plumped up with cinematic strings, bustling timpani rolls, and the steady shake of a tambourine.

Even more amped up is the deceptively titled "Silent Song," a bouncy psych-folk track that places airy six-string slide work seemingly snatched from George Harrison's All Things Must Pass atop Rossen's multi-layered, mournful vocal harmonies. "If I had a chance to see the friends I've loved and lost, I'd beg for their return," he sings with a sigh.

"Saint Nothing" is both the quietest and finest moment on Silent Hour/Golden Mile. Rossen spends much of the tune building up tension via ominous minor key piano plunks and his fragile torch-style vocal delivery, but things get extra intense once a downtrodden brass section seeps into the composition. Ultimately, the number reverts back to the eighty-eights, which fade and decay into the ether like a dying breath.

True, Rossen does get some musical assistance throughout the EP (Dr. Dog's Eric Slick, for instance, hammers away on the drums on the Elliot Smith-for-indie-beardos closer "Golden Mile"), but the bulk of the kudos must go to the singer-songwriter.

Grizzly Bear is reportedly in the studio, and considering the band's track record, chances are its next collaborative LP will be a stunner. Just for a little bit longer, though, let's celebrate Rossen's offshoot, where -- for once -- one man made all the difference.