In some cases a concert film is the greatest gift a band can give a fan. I'm thinking about Nirvana Unplugged or The Band's Last Waltz; great films that stand as testaments to a group's power over a crowd, or command of their music. Some documentaries are perfect representations of a band because of their weirdness, such as Grant Gee's wonderful chronicle of Radiohead's breakout year, Meeting People Is Easy. And then there are films so lost in their own art as to become far less than the sum of their parts, the kind of hodge-podge, post-modernist mishmash that defy even the most ardent fans. 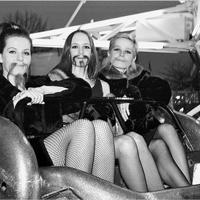 In this category I would put Vincent Moon's failed experiment for Arcade Fire, Miroir Noir, which lead to a spitting match between the two parties that remains acrimonious to this day, shocking when you consider Moon introduced Arcade Fire to a much wider audience with his Takeaway Shows series. At the Vancouver International Film Festival I had a chance to take in another Vincent's (Morisset) vision of Sigur Ros, and I fully admit to being completely obsessed with seeing it. I love Sigur Ros with the passion normally reserved for religious causes. I bought their previous documentary, Heima, six months before it was released. I was pre-disposed to love this film.

The short clip you can find here is unfortunately fairly representative of Inni as a whole. It would have been infinitely more compelling if Morisset had simply presented the concert footage unadulterated. Instead, he went to extraordinary lengths to alter the film, transferring the digital video to film, then projecting the film on a wall through various objects, and filming that again digitally. (It's unsurprising that Moon and Morisset are frequent collaborators, and both had a hand in Miroir Noir). In a five minute clip this would have been interesting, but over the course of more than an hour the effect is distancing, taking the sometimes icy precision of the band to literal extremes. The only welcome respite comes in the form of older footage that shows the incredibly awkward band members performing on small stages.

Andrew Bird: Fever Year succeeds in all the ways, for me, Inni fails. The concert footage is clear and filmed at "normal" angles, allowing Bird's performance to stand front and centre. Considering those performances often involve multiple loops of violin, spinning custom amplifier horns, and a barefoot Bird channeling some kind of vaudeville singer, this is a savvy choice. The film charts Bird's Noble Beast tour on which he was apparently sick for all but a few days, suffering from a constant fever that had him alternately sweating or chilled. It intersperses footage of a Milwaukee stop with scenes of Bird collaborating with his guitar techs, equipment makers, and, in the most revealing section, playing at his barn surrounded by posters of his shows.

I've seen Bird twice in concert and can safely say that Fever Year captures the experience of being at his show exactly. While this doesn't necessarily make it a better film than Inni, I would argue that it makes it a more musical film. It accomplishes the rare visual feat of making the audience feel like it's involved in the creation of something while simply taking it in. How much of that is due to Bird's charisma as a performer and how much is the result of director Xan Aranda's editing is up for debate, but the fact remains that I've rarely felt more engaged by a film to the point that I thought I was creating it.

Sadly, no footage or even a trailer from Fever Year are online, so you'll have to make do with Bird's TED Talk from 2010.