The real power in Quebec used to be the Catholic Church, but when Alexis de Gheldere talks about his new documentary Seeking the Current (now receiving its English language premiere at the Vancouver International Film Festival), it sounds like the real power today is with Hydro Quebec. 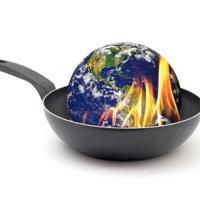 Cooking up a National Energy Strategy in Kananaskis

Representatives from Hydro Quebec wouldn't talk with de Gheldere either -- even though Premier Jean Charest would. "That was an obstacle, but at the same time the fact that they didn't want to be in the film says something. Les absent ont toujours tort." I ask de Gheldere to translate. "The absentees are always wrong." De Gheldere says that in 2009, an association of Quebec journalists gave Hydro Quebec a special joke prize for their lack of transparency. "A lemon prize," he called it.

Talking on his cell phone from a park outside McGill University just before attending a talk by photographer Edward Burtysnky, whose most recent series features landscapes affected by oil production and distribution, de Gheldere says the idea for his movie was born in 2005 when he went on a canoe trip with Nicolas Boisclair to see a river that was about to be dammed by Hydro Quebec.

"It was sort of a farewell trip, and I was on that trip for five days with my camera filming and he saw me running around with my camera filming and being super-enthusiastic in the remote wilderness. And I was seeing him have to deal with all the organization of that river trip and we became friends and talked about how we should do a documentary about the river, the real river, and that's how the project started. This is going to be the 14th river of our 16 major rivers to be harnessed for hydroelectricity. The goal was really to document the Romaine River, a great ecosystem, while there is such a thing.   After setting out to co-direct the movie they added a second goal -- trying to figure out whether the power from the new plant was the most cost-effective way to meet Quebec's energy needs. "Are there solutions for producing that electricity at costs comparable, or even more interesting?"

While the film is framed by their 46-day journey exploring the pristine wilderness, it's punctuated by explorations of alternative energy sources including wind, solar, geothermal and biofuels that experts claim could provide renewable power for less money than a new hydro plant on the Romaine.

With the help of actor and activist, Roy Dupuis (The Rocket, Shake Hands With the Devil) -- who not only conducts interviews and provides English language narration, but joins the filmmakers on the final leg of their river journey -- they provide a guide to alternative energies and how the province of Quebec seems to be created for them. A retired wind energy expert from Hydro Quebec talks about how Quebec and England are the two best populated sites in the world for wind power and, if harnessed properly, Quebec wind could generate enough electricity to meet the power needs of all of Canada and the U.S. and, if I understood the subtitles correctly, could do so three times over.

"The biggest surprise was to see how there are solutions for bringing energy into Quebec society at a cheaper cost that the Romaine River project will bring it, that it's available right now, and we can do it anytime we want. And it's there. So saying, 'hydroelectricity is the nirvana of electricity production in Quebec' is like something from the past, and not up to date in 2011. If you compare the cost of kilowatt-hour with the Romaine -- wind energy, energy efficiency -- you get lower costs. It has been proven, and even Hydro Quebec has said that in front of different bodies. Our goal with that movie is just to bring information out loud and discuss. And our movie is yet another argument to have a provincial public investigation of Hydro Quebec like Gomery (the inquiry into the sponsorship scandal)."

'We took the risk'

While the movie hasn't succeeded in launching an inquiry, it has sparked a chord in Quebec. The French version (Chercher Le Courant) won the public award when it premiered at a documentary festival in Montreal. "That was very wow, because it's a movie we've done 95 per cent non-financed. I took $10,000 from the job I had before to buy a mic, and a tripod, and a camera, and off we went and we had no funding."

After the movie's award-winning debut, the filmmakers rented a theatre in Montreal. "We took the risk." The movie ran for two and a half months and screenings were three-quarters full.

Now de Gheldere is hoping that after translating the narration into English, the story will translate outside of Quebec. He begins finding out tonight, when Seeking the Current shows as part of the Vancouver International Film Festival, this screening sponsored by The Tyee.

"I'm 36-years-old," says de Gheldere. "I feel like a kid still, and when I go to a movie I want to be moved, I want to have a need to talk about it with other people and very humbly I can say that we succeeded with Seeking the Current. A good part is when we show the movie to any audience and they're moved by the movie, the movie stays in them for a long time and that's what my goal is for making movies. In 2001, I was at the Vancouver Film Festival watching a movie and now I'm going to present my movie and I'm really, really proud."