When Lionel Lepine's plane landed in London, England in August after a long flight from northern Alberta, his initial reaction was culture shock. It was Lepine's first time flying overseas. The occasion was the Climate Camp for Action, an event now in its third year, which brings together hundreds of grassroots activists who are willing to take direct action in the fight against climate change. 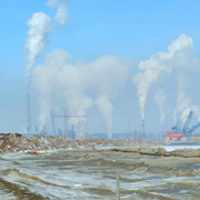 Lepine didn't expect his decision to leave his home in Fort Chipewyan and head to London with his friend George Poitras to make headlines across Canada. But sure enough, it did.

"My first impression of this climate camp was that it was strictly focused on coal mining and other kinds of mining," Lepine, a member of the Athabasca Cree First Nation, told The Tyee from his office in Fort Chipewyan.

The two men used visuals and workshops to explain how the tar sands are affecting their community. They also showed a film called H2Oil, which will be screening Sunday and Monday as part of the Vancouver Film Festival.

"In the U.K., people just assumed Canada was this perfect, green country, nothing going wrong over there. They assumed that Canada was the best of the best," said Lepine. "Of course they're not going to give you guys the ugly truth of what's really going on," he told those in attendance at the Climate Camp.

"Once they were aware that there is this tar sands things going on in northern Alberta and Canada, all of a sudden, all of their attention was focused on us, so we sorta became almost like movie stars over there," he said with a chuckle.

Their words inspired Climate Campers to action. "We managed to recruit probably about 300 people, if not more, I think there might have been about 500 people who followed us down the streets of London," said Lepine. Complete with oily props and stained Canadian flags, the anti-tar sands march though London's financial district garnered coverage on the BBC and major Canadian news outlets.

A different approach to protest

Macdonald Stainsby, who works with Oilsandstruth.org, also attended the Climate Camp. He thinks that the decision at Climate Camp to focus on Indigenous community members from Fort Chipewyan marked a shift away from what he called "the usual nature of white, middle class organizing."

The public outcry against the tar sands that followed may have caught some Canadians off guard, but for Stainsby, it represents another level of climate activism, which many North Americans may not be familiar with.

"We did not have to start off with a discussion about various ways that capitalism can be reformed to deal with the climate crisis," Stainsby told The Tyee by phone from his home in Edmonton. "The main banner that people had to walk under just to get into the camp said 'Capitalism Is Crisis.'"

H2Oil will screen twice as part of the Vancouver International Film Festival. The first screening is on Sunday, Oct. 11 at 6:30 PM and the second is at 1:15 PM at the Vancity theatre on Oct. 12. The second screening will be followed by a panel presentation with Walsh and members of the community of Fort Chipewyan.

Stainsby thinks the Climate Camp stands out from mainstream environmental organizing in Canada by offering affected communities centre stage, by telling (not asking) people in power what changes need to be made, and by ensuring that large non-governmental groups act as followers and allies, but not as leaders of climate campaigns.

In the same vein, he thinks that H2Oil has had an impact precisely because the film focuses on the struggles of the people in Fort Chipewyan. "The film is a good window into why things went so well at the Climate Camp," says Stainsby, emphasizing the centrality of the stories of the people of Fort Chip in inspiring people to action.

'Downstream from most destructive project on planet'

Shannon Walsh, the director of H2Oil, didn't set out to make a film that would become the hallmark the international climate justice movement.

"In the beginning, to be honest, I didn't even know what the tar sands were," she told The Tyee from her cell phone in Edmonton, where the H2Oil is screening as part of the city's yearly film festival.

Indigenous people "are the people who have been raising the alarm, who have been courageous enough to actually take their struggles further and get people aware of what's actually happening," said Walsh.

The film, a feature-length documentary, weaves a narrative between aerial views of the tar sands, the natural beauty of the Athabasca region, and the cities of Edmonton and Calgary, all the while rooting itself in the homes and gathering places of people living in Fort Chipewyan.

"The river flows in our direction, so we are downstream from the most destructive project on the planet, and we always say, had the river flowed south, you know those mines, they would either be non existent or they'd be the most environmentally friendly, safest plants in the world because it would be their people who would be affected, not us," said Lepine.

"But the fact is, the river flows in our direction. I don't think they really could care less about who pays the price, as long as they get that oil out of the ground and they make the money off it."

H2Oil will screen twice as part of the Vancouver International Film Festival. The first screening is on Sunday, Oct. 11 at 6:30 PM and the second is at 1:15 PM at the Vancity theatre on Oct. 12. The second screening will be followed by a panel presentation with Walsh and members of the community of Fort Chipewyan.