No matter what the outcome, the Russian invasion of Ukraine is a disaster for us all. It’s the wrong war in the wrong place, and very much at the wrong time. The winner will enjoy a hollow victory at best, and everyone will lose — especially countries that have had nothing to do with the war.

Under a new general and with a major effort, the Russians sweep across Ukraine. Millions of Ukrainians, including children, are deported to Russia; millions of Russians arrive to take their place. After the victory parade, guerrilla warfare breaks out and Ukrainian raiders slip into Russia to blow up bridges and oil refineries. The guerrillas get help from NATO, but not enough to end the Russian occupation.

The European Union loses some members, like Hungary, who decide to support Putin. Eventually, the West faces too many other problems and cuts a deal with Putin: as long as he ends his expansion plans with Ukraine, some limited trade can resume — especially in much-needed fossil fuels from Russia and wheat from Ukraine. Some of the oligarchs get their yachts and mansions back. Putin re-absorbs Belarus, then makes a deal with China before pulling much of Central Asia back into the Russian Federation. No one cares about those countries, so he gets away with it.

Putin rebuilds his armed forces and stations a lot of them close to his western border, from Finland in the north to Romania in the south. He starts complaining about the mistreatment of the Serbs and the mistreatment of Russians in the Baltic republics. We all await the next war.

With the aid of advanced American weapons, Volodymyr Zelensky defeats Russia’s battered and demoralized armies. Ukraine recovers the Crimea and the puppet “people’s republics” of Luhansk and Donetsk that Putin set up in 2014. Putin himself resigns or is ousted.

Does it make a difference? As the Russians themselves would say, “Nichevo” — never mind, it doesn’t matter. Putin’s people remain in place, and one of them takes over. Russia is defeated but not conquered.

The new government in Moscow signs a treaty ending the “special military operation,” but refuses to hand over anyone accused of war crimes or crimes against humanity. It will repatriate the Ukrainians it kidnapped, but only in exchange for the complete lifting of sanctions.

The Russian armed forces, meanwhile, undergo a revolution in military affairs that takes years. Like all other militaries, the Russians have studied Ukrainian success and plan to win decisively the next time. Ukraine understands this and strengthens its own armed forces as well.

As Robin Sears pointed out in a recent article, we are back to the Cold War policy of containment: hemming in an enormous nation behind a string of expensive bases equipped with ever more expensive weaponry.

Ukraine itself becomes what West Germany was in the first Cold War — a forward base, heavily armed and on the alert. Meanwhile Russia seeks new friends in the Balkans, the Middle East, Africa and Asia. We all await the next war.

Putin’s help has kept Bashar al-Assad in power for years while Russian pilots and mercenaries like the Wagner Group grind down the Syrian rebels who first went into the streets during the Arab Spring in 2011.

Similarly, Putin continues with a war of attrition, trying to link his puppet republics with Crimea while dropping missiles across Ukraine and sometimes staging land raids from across the border.

As with Syria, boredom sets in as the West turns to its own considerable domestic problems. Some of Russia’s neighbours and customers start buying oil, natural gas and coal again. That leads to bitter recriminations among allies. NATO consoles itself that at least the Russians are too preoccupied to try to attack the Baltic states or eastern Europe.

But military spending in the NATO countries (and many others) goes up, at the cost of social programs. Putin has deliberately shown the world what he was prepared to do to a European country, leaving Europe with two choices: rearm, or submit to Russian demands.

Canada, like other NATO countries, is under strong pressure to militarize. Countries that don’t have conscription debate bringing it back. Finland, for example, has universal male conscription (plus voluntary female service). With the population of B.C., Finland has a regular army of about 35,000 and can put 900,000 reservists in the field in wartime.

But Canada and the U.S. find conscription politically dangerous. We remember our conscription problems in both world wars, and the Americans effectively ended their draft after the debacle of Vietnam.

So even a hawkish Canadian government expects considerable public resistance to a long-term confrontation with the Russians, and with good reason: the greatest burden will be borne by the young and poor.

We debate making a cynical deal with refugees and asylum seekers: serve in the Canadian Forces for three years and come out with citizenship for you and your family members. We await the next phase of the war.

Putin’s war against the world

Whatever the outcome in Ukraine, the war’s greatest casualties will be innocent bystanders in distant countries. Putin has not launched a Third World War, but he has launched a war against the world by weaponizing food supplies. According to a recent report, Russia and Ukraine produce 30 per cent of the world’s wheat; Ukraine produces half the world’s sunflower oil.

David Beasley, executive director of the World Food Programme, recently warned that if Russia doesn’t allow Ukraine to resume shipments of wheat from its Black Sea ports, the result will be “famine and destabilization and mass migration around the world.”

“There are currently 811 million chronically hungry people in the world,” Beasley said. A record high of 276 million are on the brink of starvation — up from 135 million people before COVID-19 and 80 million in 2017. Of these, nearly 49 million people in 43 countries are right on the edge of famine.”

Global heating will worsen as growing militaries burn ever more fossil fuels to build and power their new aircraft, missiles, ships and land transports. If not used in war, military forces will likely help in suppressing popular revolts over rising costs of food, fuel and water. 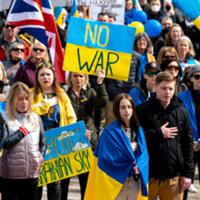 Inside the Banality of Putin’s Evil

Few governments will be able to sustain their support of Ukraine by donating humanitarian funds while also keeping their own people adequately fed, housed and employed. Climate disasters will keep coming, and the COVID pandemic shows no sign of stopping. It will likely be aggravated by still more outbreaks.

We fiddled away the time we might have spent preventing long-term problems like climate and public health emergencies. Now they’re right in our laps, but so are urgent problems like political polarization, inequality and countless other social issues.

Putin’s war has solved none of those problems; it has made all of them worse. Yet we still have governments playing their great game of empires, as if it matters who’s up and who’s down as the world collapses.

The war in Ukraine must end, and soon, and with the decisive defeat of Putin’s Russia. But instead of preparing for yet another war, we should then turn our efforts to mitigating both the damage the war has done to us all, and the far worse damage inflicted by present and future climate disasters.