Well into The Indigenous Paleolithic of the Western Hemisphere, Paulette Steeves wearily observes: “Disagreements between archeologists over the peopling of the Americas have been so fierce that the field has been described as a battleground and an archeological badlands.”

A battlefield might be a strange place to find Steeves: she is a Tier II Canada Research Chair in Healing and Reconciliation, as well as an associate professor of sociology, at Algoma University. Of Cree-Métis ancestry, she is a force to be reckoned with on any academic battlefield.

Steeves argues, on good evidence, that Indigenous peoples are not just recent Asian immigrants, but peoples long and deeply entangled in what we call the Americas. Both they and their lands transformed one another thousands of years before the Europeans belatedly stumbled in. In that sense, they have indeed been here “forever.”

Yet many archeologists refuse to believe it and reject or ignore the evidence. Worse yet, they discourage research that might prove them wrong. American archeology is indeed both a battlefield and a badlands.

Anthropologists and archeologists began the scientific study of the Indigenous peoples of the Americas in the 19th century. They started from the premise that those peoples were literally moribund, doomed to disappear as European settlers overwhelmed them. Science could record the death pangs of Indigenous cultures, but little more. And those cultures certainly couldn’t provide anything that might enrich settler cultures.

Of course it was a European science, asking European questions and demanding European standards of evidence. And consciously or not, its purpose was to assert European superiority over the benighted peoples it studied.

One of the key questions was how long the Indigenous peoples had been in the Americas. In 1912 Aleš Hrdlička, head curator of the Smithsonian's United States National Museum, said they must have migrated from Asia no earlier than 3,000 years ago. Given the diversity of the peoples, their languages, and their ways of life, this was a deeply stupid theory soon demolished by evidence. In the 1920s, archeologists began to find a distinctive kind of arrowhead known as a Clovis point all across North America. These points were eventually carbon-dated to about 11,500 years ago.

The new “Clovis First” theory, which I was taught in school, was that Asian hunters had crossed over to North America during the most recent glacial period, when sea levels were much lower. Then they spread south via an ice-free corridor east of the Rockies into the rest of the continent. They lived as big-game hunters using Clovis points on their spears. (They were also presumed to have driven most big mammals like horses and dire wolves into extinction).

I also learned the “diffusion” theory: that some Indigenous peoples had actually been civilized by white culture-bringers long before Columbus. Thor Heyerdahl argued that a pale-skinned people from North Africa had crossed the Atlantic in reed boats, founding the great civilizations of Peru, before then sailing west on balsa-wood rafts to populate Polynesia. Others thought the Phoenicians had arrived in Mexico and civilized the Olmecs, Maya and Toltecs.

Of course such ideas were not only wrong, but racist. They assumed that Indigenous peoples, however long they’d been in the Western Hemisphere, had been too stupid and ignorant to build civilizations like those in Mexico and Peru.

Archeologists also had an ulterior motive in defining Indigenous peoples as new and unenterprising arrivals. If they were recent immigrants from Asia and hadn’t even “developed” the place, European conquest looked less like the armed robbery it was.

Steeves builds her counter-arguments slowly and carefully. She notes that countless animals had migrated both ways between Alaska and Siberia for over a million years. Yet somehow humans, the most mobile of the primates, had stayed in Africa and Eurasia.

As Steeves puts it, “any two-legged or four-legged mammal could have migrated east to west or west to east over what we know today as the Bering land area during the Pleistocene” — that is, long before the Clovis hunters.

They may not even have arrived on foot. The ancestors of Indigenous peoples in Australia had the skills to build seagoing vessels at least 60,000 years ago, and their cousins in northeast Asia could also have paddled along the shores of Asia to Alaska and beyond.

A few very old sites are accepted, notably Monte Verde in Chile which is demonstrably 33,000 years old. But Steeves reports on sites that are dangerously old. One, near Puebla, Mexico, held bones butchered by stone tools. The bones have been dated to 250,000 to 275,000 years ago. The Calico site in California’s Mojave Desert, studied by British archeologist Louis Leakey, dates back as far as 200,000 years; the Cerutti Mastodon site, approximately 275 kilometres southwest of Calico, has been dated to 130,000 years ago.

Steeves cites the research on these and scores of other very old sites, and lists them in her online Indigenous Paleolithic Database of the Americas. She doesn’t argue that they make an open-and-shut case for very early humans in the Western Hemisphere. But given the implications of those dates, they certainly deserve more research.

Yet archeology is a conservative field where money is scarce for “controversial” projects.

Decolonizing both sites and names

Much of the conservatism is in the very language of archeology. “Paleolithic” is a term applied to the Eastern Hemisphere; the earliest inhabitants here are lumped together as “Paleoindians,” part of the “Amerindian” populations going back to Clovis.

But such terms derive from European names, and misnomers like “Indians.” Even place names are mostly European, as Steeves keeps reminding us by using expressions like “the area known today as Ellesmere Island.” She prefers “Western Hemisphere” instead of “the Americas.”

Similarly, the field defines evidence in European terms alone, ignoring Indigenous Oral Traditions. This is a mistake, and Steeves brings in oral accounts as legitimate evidence — for example, of early human contacts with now-extinct species like the mammoth. Such stories are generally dismissed as mere folklore and myth.

The case for Indigenous Oral Tradition

But we now know that preliterate Indigenous peoples in the Americas were capable of projects like the Poverty Point earthworks in Louisiana that were built over centuries by peoples from all over the Mississippi basin. Some Indigenous peoples were experts in horticulture and mariculture. Farming peoples designed stone calendars designed to tell them when to plant and harvest corn.

Underlying those achievements were peoples whose communication skills and memories must have far exceeded ours. They needed the skills of science: powers of observation, the ability to think inductively and deductively, to calculate, and to argue for their findings. They needed to hold all their information in their heads, and then to pass it on to others in correct detail — for centuries. Indigenous teaching must have been dramatically superior to ours as well.

“Indigenous peoples tell stories of the past and present,” Steeves writes, “of a vibrant world in which all things have life and are respected. Oral Traditions are not merely stories or histories. They are living intergenerational experiences of respectful cohabitation, where humans considered themselves to be only one of many beings in a sacred landscape.… To interpret Oral Tradition requires more than a Native informant. It requires academics to step outside the colonial mainframe and become open to understanding other realities, to surrender their authority, power and preconceived notions of ‘others.’” 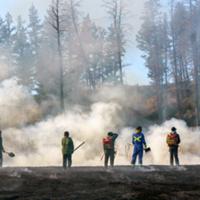 Europeans destroyed most of that hard-won, carefully preserved tradition, and dismissed the rest as savage superstition. Then, in five centuries, they burned through the resources that had sustained Indigenous peoples for 25,000 (or 250,000) years.

Steeves’s book is intended for her colleagues, challenging them to learn and apply Indigenous science as well as their own to learn the true history of this hemisphere’s peoples. If they take up that challenge, we will all be the better for it.

I would like to see her and other Indigenous archeologists bring their science to a wider audience through less technical books and articles. Once we all understand how long the lands we call the Americas have been inhabited, we will be eager to fund more archeological digs. We could also learn about how ancient peoples lived and flourished in different climates and ecosystems, and learn how to do the same. As we transform our understanding of the lands, the lands will transform us as well.