The trucker revolt and how it’s been handled raise a critical question for the future of Canada. Can the government count on the police to enforce laws that preserve its legitimacy?

Sherlock Holmes once noted a dog that didn’t bark in the night, because it had seen a friend and not a threat. Our police forces and governments are like that dog. I can see a couple of possible reasons for the diffidence of Canadian police forces in dealing with protests across the country. The first: They understand that violence, however provoked, will explode. Protesters will cast themselves as martyrs and further undercut governments.

Therefore, the police react very gently to protesters’ stubbornness. Hot tubs and dance parties? Enjoy yourselves, kids! Even a violent assault on police, unless well-documented, might go unpunished.

The drawback of this strategy is that it makes governments look weak and ineffective. Even a brilliantly negotiated non-violent resolution would look like a victory for the protesters, not the governments. The second explanation: the police are objectively on side with the protesters. As many have noted, such gentleness is rarely seen in police responses to Indigenous protests. And we’ve been afforded disturbing glimpses such as this one:

The military might be called in, as Pierre Trudeau chose to do in the October Crisis, but in 1970 the crisis was very local and the resentment confined largely to one part of one province, Quebec. Even then, the backlash led to the end of the War Measures Act and the creation of the Emergencies Act, which Justin Trudeau has just invoked.

This time the crisis is countrywide, and the loyalty of both the military and the police might even be dubious. Some would resist the idea of inflicting violence on their fellow-Canadians. Others would simply agree with the protesters, like the ex-Mountie in charge of the Ottawa protesters’ security. Unless governments were certain of the willingness of their police and military forces to obey orders, sending them in to clear out the demonstrations would be disastrous, an invitation to mutiny. Ordinary Canadians who support their governments would find themselves defenceless, like the residents of downtown Ottawa. Justin Trudeau and the premiers could face two options: resignation or physical removal from office.

But that’s a worst-worst-case scenario. Even if the police and military were willing to hit the protesters as hard as the Cossacks hit the peasants in St. Petersburg in 1905, the government would be hard-hit too. The next federal and provincial elections would have a single issue: for or against the February Crackdown/Massacre? And these elections might be conducted amid a new COVID resurgence and perhaps a war with Russia. 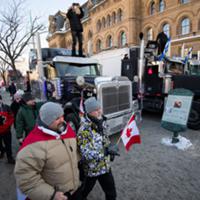 Where the Convoy Is Trying to Drive Canada

The protesters appear to understand this calculus. They wouldn't have got this far without keen observation of government weaknesses, a good grasp of the political situation, imaginative planning and excellent logistics.

Dithering will not save our democracy. The institutions of our country are under concerted attack, and we must rely on those institutions — police, courts, military, Parliament — to rescue us. If they do, it’ll be a mess afterward, but we can clean it up. And in the process, we may need to get serious about weeding out members of the police or military who are more prone to subverting our institutions than protecting them.

If it turns out our institutions can’t or won't rescue us, then farewell to Canada as we thought we knew it. We’ll have to come up with a new Canada, and establish it against very organized, well-funded and well-armed resistance.