The Canadian Taxpayers Federation describes itself as “a non-partisan, non-profit advocacy organization committed to lower taxes, less waste and more government accountability.” But it takes advantage of the positive associations people often have with the word “taxpayer” and attempts to fill it with neoliberal and anti-Indigenous political ideas.

Throughout my research, I have tracked the CTF. The organization has often been treated with kid gloves when news stories position it as representative of “the taxpayer” — a group of people that doesn’t exist outside of one’s personal relationship with the Canada Revenue Agency.

Media continue to rely on the CTF in stories ranging from public sector pay to education policy and Indigenous policy. This is a problem.

Critical journalists and observers have documented how the CTF is funded, its secretive governance structure and its attempts to look non-partisan.

Over the years, my research has documented the CTF’s political tactics. In a recently published study in the Canadian Review of Sociology, sociologist Alec Skillings and I collected almost every document the CTF has published on its website from 1998 to 2019 that addressed Indigenous policy — over 400 documents.

These documents ranged from shorter blog posts to press releases and longer reports. We used site searches to narrow down and track when, how and what the CTF wrote about Indigenous peoples.

Findings from our study show the CTF focused on reducing and eroding the legal differences between Indigenous people and Canadians. Based on its statements, its political mission seems clear: the assimilation of Indigenous people into Canada and creating the appearance that “taxpayers” are abused by Indigenous people.

Between 1998 and 2008, the CTF did this by focusing on abolishing the Indian Act. Its primary solution was to repropose a rejected 1969 policy put forward by then-prime minister Pierre Trudeau, known as the White Paper, which would eliminate Indian status, the Indian Act and privatize reserve lands.

A 2004 CTF press release bluntly spelled this out:

“The federal government should phase out the Indian Act, the Department of Indian Affairs and all the policies that go with it. Establish private property rights for Indians, develop systems of governance, accountability and transparency, and begin the process of providing Indians with the same rights and responsibilities as other Canadians. The best thing for Indians and Indian communities is to stop treating them as though they are different from other Canadians.”

The CTF argued that the Indian Act was a barrier for equality, using language to disguise what appears to be its assimilative beliefs: “The CTF believes Canadians — all Canadians — are fundamentally alike. Therefore all legislation and government policy must be based on fairness and equality — not race.”

After 2008, the CTF accomplished its goals by focusing on chief salaries and “transparency,” sometimes drawing on tips from band members. Many Indigenous political thinkers saw right through the CTF’s strategy. Hayden King observed that “while taxpayer activism is certainly common, it seems to provoke a special kind of fury when involving Indigenous Peoples.”

None of this is to suggest that First Nations governments are perfect — but the question must be asked: why did the CTF pursue and publicize these kinds of stories? It certainly wasn’t to highlight colonialism and ongoing attacks on Indigenous sovereignty, nor to argue for more support.

These stories allowed the CTF to represent First Nations as illegitimate and in need of “taxpayer discipline.” The CTF preferred to direct blame for issues like community poverty toward First Nations, rather than Canada, whose entire economy is based on an extractive relationship with Indigenous lands and people.

Across the documents we analyzed, the CTF labelled First Nations as dependent on “handouts,” called Canadian Indigenous policy “generous in the extreme” and said that “taxpayers should watch their wallets” in relation to the residential school claims process.

In other instances, it downplayed and equivocated on residential schools.

The CTF has strategically worked to make Indigenous people appear subservient to “the taxpayer,” trading on myths that Indigenous people don’t pay tax. It did this in part by claiming that “taxpayers are forced to pay higher taxes to make up the difference” because of the limited tax exemptions to which some First Nations people are entitled.

This begs the question: Why does the media continue to consult an organization with such a demonstrably and consistently antagonistic relationship with Indigenous people?

When the media consults the CTF, it demonstrates contemporary hostility towards Indigenous nations. Viewing the CTF’s advocacy as whole demonstrates its orientation very clearly. 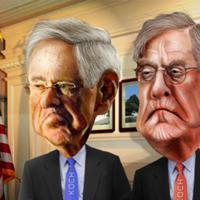 What Does the Canadian Taxpayers Federation Get From Its Right-Wing US Partner?

Despite claiming to be non-partisan, its statements and some of its alumni indicate the CTF stands firmly on the right side of Canada’s political spectrum. Some alumni include current Alberta Premier Jason Kenney and conservative provincial and federal politicians. More recently, a former provincial CTF spokesperson ran for the far-right People’s Party of Canada.

Like other political advocacy and industry-aligned groups on the right, the CTF regards Indigenous people as “in the way” of resource extraction and wealth accumulation, taxpayers and generally, of Canada.

The message our research shows is that if Canadian journalists are committed to reconciliation and combating racist myths about Indigenous people, they need to pay more attention to who they consult about Indigenous policy and politics, while being wary of groups like the CTF.

Challenging neoliberal and anti-Indigenous politics can be as simple as asking who gets to be considered a “taxpayer” when the CTF claims to speak on “their behalf.”