Some view the Alberta government’s abrupt move to reinstate the 1976 Coal Policy and hold some kind of public consultation about coal mining in the Rockies as a sign that a tone-deaf government is finally listening to an enraged electorate.

Energy Minister Sonya Savage even made a grandiose claim. “We recognize that rescinding this policy has caused tremendous fear and anxiety that Alberta’s majestic eastern slopes would be forever damaged by mountain top and open-pit coal mining,” she said. “Let me be clear. This will not happen in Alberta.”

But a leopard never changes its spots.

So don’t be fooled: open-pit mining is still firmly on the government’s agenda.

Although the Alberta government may have changed tactics in the face of unprecedented civil protests, it still has not changed its 19th-century focus on resource extraction that benefits foreigners and disenfranchises Albertans and destroys their water security.

Over the last two months, ranchers, towns, municipal districts and conservationists have made it plain they consider open-pit coal mining in critical watersheds in the Rockies an unacceptable risk to their economies, their communities and their future, in part due to the industry’s long-standing water pollution.

Moreover, the economics of the boom-and-bust industry don’t make any sense. Even Brian Jean, a former leadership contender for the United Conservative Party, emphasized this conservative point in a recent Calgary Herald column.

“The royalties Albertans get from coal are minuscule — they wouldn’t fund the annual budget of the energy war room,” Jean wrote. “The cost-benefit of coal may not be there. Alberta collects about one per cent of coal revenue, less than $100 per coal railcar, that must be weighed against the significant environmental risk and the potentially more severe reputational risk.”

But the government hasn’t been listening to common sense. As things now stand, more than a half-dozen mostly Australian companies still hold coal leases to nearly 2,000 square kilometres of the eastern slopes of the Rockies, from the Oldman River in southern Alberta to the Ram River west of Red Deer.

After extensive lobbying by the Coal Association of Canada and its Australian members, in May 2020 the Jason Kenney government quietly revoked the Coal Policy, removing restrictions on open-pit mining on these leases. The Australians rejoiced.

When Savage reinstated the policy this week, she didn’t answer some essential political questions.

For example, why did Australian mining companies know about the cancellation of the Coal Policy before Albertans?

Why did the environment and tourism ministers write letters of support in 2019 for an Australian coal company trying to raise money before it was even listed on the stock exchange?

Where are the economic analyses evaluating the costs and benefits of exporting metallurgical coal?

Why do Australian coal miners consistently describe the Kenney government as “engaged and supportive” in their corporate presentations?

Although the government’s decision to reinstate the Coal Policy may temporarily restore some protection for the province’s mountains, it doesn’t undo the damage already done.

Resurrecting the Coal Policy, which prohibits surface or open-pit mining on Category 2 lands in the eastern slopes, does not cancel leases granted during the policy or new leases granted after its abolition. The leases cover almost 500,000 hectares.

And reinstating the Coal Policy and its Category 2 prohibitions does not really protect the eastern slopes, because they are still subject to ministerial exemptions for specific projects.

Former NDP energy minister Margaret McCuaig-Boyd unwisely set that precedent with an exemption from Category 2 prohibitions for Ram Coal in 2016 in a critical watershed. (The Coal Policy recommended that such exemptions “would not normally be considered.”)

Nor has the Kenney government stopped drilling and exploration programs, which mangle the homes of bear, elk and bighorn sheep with kilometres of roads and scores of drilling pads.

The ecological damage from roads and drilling pads on six exploration leases is already substantial and might take centuries to repair.

It is also telling that the government has told the Alberta Energy Regulator not to process any more exploration requests, but “this direction does not apply to exploration programs that have already been approved,” noted resource law expert Nigel Bankes at the University of Calgary.

“Minister Savage claims that the 1976 Policy has been reinstated, but a lot of activity has occurred between June 1, 2020 and Feb. 8, 2021, and none of that has been rolled back,” he wrote. “This is not reinstatement; it is reinstatement minus what has happened since June 1.”

Savage also implied during her press conference that “mountain top removal” wouldn’t be allowed in Alberta under any circumstances.

She grossly misled Albertans. Her directive on the issue says coal mining exploration and development is OK on sensitive Category 2 lands as long as it does “not involve mountain top removal.” Does that mean open-cut mining or strip-mining will be allowed?

Nor does her directive prevent the decapitation of mountains in the Crowsnest Pass on Category 3 and 4 lands, which have lesser protection under the Coal Policy. Both Montem Resources and Benga Mining (its Grassy Mountain project is now the subject of a joint provincial-federal review) have proposed to level several mountains in the area.

Meanwhile, the UCP government has claimed that “scientists, not politicians, make the environmental decisions.”

But that’s false. It is still abetting Aussie coal miners by any means it can.

Take water for example. It is a scarce and precious commodity in southern Alberta, and shortages will get scarier with climate change.

The region’s water security is primarily protected by the integrity of the eastern slopes of the Rockies, which hold and filter clean water for the plains below.

And it is governed by a specific allocation order allowing water to be assigned to towns, farmers and ranchers, industry and other users.

But Australian coal miners in the Crowsnest Pass don’t have enough water for their proposed open-pit mines and have lobbied the government for help.

Benga Mining and Atrum Coal both got what they asked for.

Without public consultation (a persistent theme here), the Kenney government has put forward a plan to take up to eight billion litres from the Oldman River dam reservoir, reserves that had been set aside for drought and other environmental conditions and emergencies.

Did the Kenney government do any specific studies on the impact of coal mining on water scarcity, climate and selenium pollution in the eastern slopes before giving away this water? No.

Meanwhile southern Albertans are appalled that the government is proposing to change water allocation rules for Australian companies and undermine the existing market. 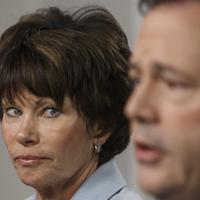 Just last week, the municipal districts of Pincher Creek and Ranchland sent off a blistering letter to their local MLA, Roger Reid, about the Kenney government’s glaring Australian bias in overriding the water allocation order.

“It is deeply troubling to see that this Order appears to be in the process of being dismantled, effectively with no consultation. What appears to be passing for consultation, is a rapid ‘drive-by’ where provincial officials appear to be merely giving notice as to what is going to happen, as opposed to seeking meaningful input from the residents and jurisdictions impacted.”

So has the Kenney leopard changed its coal spots?

The battle to protect the water security of two million Albertans and their economies has just begun.