Our personal assessments of our government’s response to the pandemic seem to align closely with our politics. The Trudeau government’s response is largely supported (or at least tolerated), perhaps because few can imagine Erin O’Toole’s Tories or Jagmeet Singh’s New Democrats doing a better job. In the U.S., 75 million Americans voted for Trump despite his refusal to deal effectively with the pandemic.

When we look overseas, we glimpse countries that seem to be doing well, like New Zealand, and countries doing poorly, like the U.K. Again, our politics may affect our judgment: Jacinda Ardern gets media praise, and Boris Johnson seems like a British parody of Donald Trump.

“Collectively,” the Lowy Institute writes, “these indicators point to how well or poorly countries have managed the pandemic. An average of the rankings across the six indicators was normalized for each country to produce a score between 0 (worst performing) and 100 (best performing) on any given day in the 36 weeks that followed their hundredth confirmed case of COVID-19.”

The numbers still have a political tinge: some governments may well have suppressed embarrassing data, and China is not included “due to a lack of publicly available data on testing.” Even so, the rankings offer insights into what responses worked, and how politics influenced those responses.

Do the top-response countries have anything in common politically? Very little, which must disappoint those who want some simple quality that gives such countries an advantage. Unsurprisingly, New Zealand ranks 1, with a score of 94.4. The rest of the top five are literally and politically all over the map: Vietnam is 2, Taiwan 3, Thailand 4 and Cyprus 5. They range from democracies to Thailand’s monarchy and Vietnam’s Communist government.

“On average,” says the Lowy Institute, “countries with authoritarian models had no prolonged advantage in suppressing the virus. Indeed, despite a difficult start and some notable exceptions, including the United States and the United Kingdom, democracies found marginally more success than other forms of government in their handling of the pandemic over the examined period. By contrast, many hybrid regimes, such as Ukraine and Bolivia, appeared least able to meet the challenge.”

Economic development was also a poor predictor of an effective response. While rich countries have more resources, the study notes that poor countries often dealt better with lockdowns and contact tracing. (Poor countries’ recent experience with outbreaks like Ebola and SARS may have primed them for a faster, no-nonsense response.)

The study finds no heroes: “Most countries outcompeted each other only by degrees of underperformance.”

Canada’s degree of underperformance is pretty impressive: we ranked 61, essentially tied with Israel and beaten by the likes of Belarus, Italy and Paraguay. Cold comfort that our underperformance was better than the U.K. (66), Russia (76), the U.S. (94) and dead-end Brazil (98).

This is why governments dislike serious disease outbreaks: they’re not only bad for business, they make governments look as lazy and inept as they really are. Worse yet, the success of government measures depends on their damn citizens. The study quotes American political scientist Francis Fukuyama, who argues that effective crisis response doesn’t depend on regime type “but whether citizens trust their leaders, and whether those leaders preside over a competent and effective state.”

So the Kiwis trusted Jacinda Ardern, and the Vietnamese trusted Nguyen Phu Trong, and both leaders knew they had effective state machinery to direct against the pandemic. That may have given them the confidence to move really fast a year ago, shutting down schools and closing borders while most governments dithered.

Trudeau was among the ditherers, though he earned a lot of sympathy when his wife contracted COVID-19 and he quarantined his whole family — emerging daily on his front porch to update the country, looking tired and older in his new beard.

Months before COVID-19 appeared in China, Trudeau’s government had shut down the Global Public Health Intelligence Network, whose purpose was precisely to spot outbreaks around the world and assess their threat to Canada. He had staffed the Public Health Agency of Canada with civil servants, not scientists (PHAC’s civil-servant president Tina Namiesniowski abruptly resigned last September). And he had expelled Jane Philpott, his highly competent minister of health, in the wake of the SNC-Lavalin affair.

So Justin Trudeau’s grave demeanour in those updates may also have reflected his knowledge of how ill-equipped he and Canada were.

Better said, he and the provinces and territories. As in the U.S., our response was run chiefly on the provincial level, and our premiers tend to be more concerned about the health of the economy than that of their citizens. Hence the uneven responses over the past year, with half-hearted lockdowns and premature reopenings. As on the international level, provinces may look good compared to their neighbours but only by underperforming less badly.

If Fukuyama’s argument is valid, Canadian and American public responses reflect a serious lack of trust in their governments. It could be that Trump understood this very well — he’d been criticizing his own government for years — and knew that his supporters would be disappointed if he backed Dr. Anthony Fauci and other health experts. Disappointed backers might not vote for him. Better, then, to downplay the pandemic while his voters (and Republican governors) ignored masks and social distancing.

If that was Trump’s strategy, it very nearly succeeded. Brazil’s Jair Bolsonaro did something similar, even to catching and surviving COVID-19. As recently as December, his popularity remained high. A few weeks later, after disastrous case counts in the Amazon and a clumsy vaccine rollout, it’s finally beginning to drop. 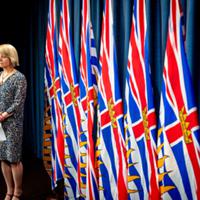 Give It to Us Straighter, Dr. Henry

Canadians evidently distrust their federal and provincial governments also, though not as much as the Americans or Brazilians. Still, it’s striking that neither we nor other publics seem in the mood to overthrow our governments, or even to vote in a new set of rascals. Occasional anti-lockdown protests lead at most to pointless riots like those in the Netherlands.

Instead, we stoically absorb the daily case and death counts, wear our masks when we shop, and shrug off the vaccination screwups. We may not trust our governments, but they seem to trust us to wait out the pandemic, mourn our dead, and then forget all about this unfortunate episode as we return to the golden age of 2019.

If that indeed is what we do, our new golden age will be short-lived, and we will soon find ourselves locked down yet again, against yet another damn virus, when the next pandemic ambushes us. It will be pointless to blame China or whatever other country it hits first. We will have only ourselves to blame.