I’ve been a fan of Dr. Bonnie Henry throughout this endless pandemic. Early on, she adopted a calm, reassuring manner that conveyed authority and respect for her audience. In updates, Health Minister Adrian Dix has wisely played loyal sidekick, keeping her in the spotlight.

Dr. Henry’s style and content made her an international star. While politicians sometimes muscled their chief medical officers away from the podium, or ignored them completely like Donald Trump, Bonnie Henry kept us kind, calm and safe.

And it showed in our case counts and deaths, which stayed relatively low through the spring and early summer. By contrast, our neighbours in Washington state and Alberta saw far higher numbers, and their numbers remain disastrous.

And on Nov. 18, less than three weeks later, B.C. reported 762 new cases. Daily case counts of 1,000 or more seem inevitable before the end of the month. By Christmas? Let’s not go there yet.

When a large part of a class flunks a big test, many teachers would rather blame the students than themselves. But they know better. “I taught him that, but he didn’t learn it,” is an old teachers’ joke on themselves. They have to take responsibility for at least part of every F because they’ve been teaching the subject, not the students.

The same is true of Dr. Henry and the Horgan government. As baffled students might say of respected but ineffective profs, “They know their stuff, but they can’t get it across.”

Inmates are running the asylum

They’re not alone. Governments worldwide are botching the current resurgence of COVID-19. The U.S. is an asylum taken over by the inmates, with over 11 million cases and a quarter-million deaths. The World Health Organization’s COVID-19 dashboard shows millions of cases almost everywhere in the world.

Health-care workers talk about “risk communication.” If they diagnose you with pancreatic cancer, they can give you good odds that with good care you’ll live another eight months. Maybe less, maybe more, but likely eight months — the average risk for such a case.

But if we consider risk for a whole society, the personal vanishes and we’re talking about “health communication.” When millions fall ill, like it or not, they’re statistics. And statistics are a hard sell when every customer is thinking: “Yeah, but I’m me and I’m special so it’ll never happen to me.” As a young man I took a stupid pleasure in smoking despite my awareness of the scientific evidence. Today’s young men and women show off their immortality by congregating on the Granville strip or at big parties, and almost half of B.C.’s COVID-19 cases are in the 20-39 age brackets.

Two recent German ads show an elderly German recalling how his generation were pandemic heroes in 2020 by being “as lazy as raccoons.” A followup ad shows him hunkered down with his cute girlfriend, making lockdown look like a long, long cuddle.

Give us serious numbers

Well, I hope such ads do reduce the German case count, which on Nov. 18 stood at 854,533. But if B.C. really wants to get a grip on the pandemic, we don’t need promises of carnal delight, but some serious numbers that will make us all realize the danger we’re in.

First, we need daily updates, all week long. COVID-19 doesn’t go partying on Friday night and get back to work Monday morning. Dr. Henry and Adrian Dix do need to take breaks, but we need case counts and death counts every day including weekends. Otherwise, the Monday numbers feel like a punch in the nose because they’re so much higher than Friday’s.

Second, we need focused case and death counts. Where in Fraser Health are people getting sick? Where in Vancouver Coastal, down to the neighbourhood, are people dying? This is no time for tactfulness or concern about “stigma.” If a neighbourhood in Surrey or North Vancouver or Kitsilano reports cases, the neighbours need and deserve to know that. They won’t panic, but they may well start wearing their damn masks and staying home more often.

Third, what racial, ethnic and gender communities are being affected? Washington state breaks down its cases, hospitalizations and deaths by county, age, sex and race/ethnicity. B.C. has been silent about that, while Indigenous communities try to learn how much danger they face. But we know that racialized and working-class communities are taking the brunt of the pandemic, and need far more support than gentrified neighbourhoods where everyone’s working from home and ordering their groceries online.

Again, fear of stigma is the pretext for silence and inaction. Dr. Henry doesn’t want to make masks mandatory because minorities and the homeless can’t afford them. The answer is to send people out with packs of free masks just as they go out with naloxone to deal with overdoses. And as for the homeless, keep buying hotels and filling them with people — and provide them with safe drugs if they need them. You can’t rehabilitate a corpse, but you’ve got a chance with a live drug user.

Fourth, count the cases and deaths in long-term care centres, explain them, and explain what you’re doing right now to protect the survivors. If nothing else, it will prepare public opinion for a major increase in the costs of caring for our parents and grandparents. 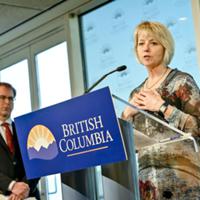 And fifth, tell the politicians it’s not about them anymore, and it never was. And it’s not about what industries have donated to their campaigns. The government can find the money to keep such industries treading water, while supporting the truly critical industries and services we need to get through this.

If Australia’s Victoria state could lock down for weeks and stamp out COVID-19, and the state of South Australia can do it now, then B.C. can do it too.

Bonnie Henry and Adrian Dix have done reasonably well so far, and it’s pointless to quibble about what they coulda-woulda-shoulda done back in February or March. They now need to confront the pandemic of November and prevent it from becoming the catastrophe of January. That means telling the truth, the whole truth, and the best-informed medical opinion they can offer.

That would give the rest of us a fighting chance to do what they ask: be kind, be calm and be safe.