Premier John Horgan has identified Indigenous reconciliation, self-determination and economic independence as a priority. This is as it should be. These issues are inseparable from the success and growth of British Columbia.

We have ample evidence across the country — from the challenges regarding LNG development in northern B.C. to lobster fisheries in the East — that sustainable resource development and economic stability require the right relations with Indigenous peoples. How decisions are made and how new types of partnerships are formed will either hold us back or compel us forward. With the right vision and political will, these changes are within our reach. We must build on the momentum from last year and the legislature’s passage of the Declaration on the Rights of Indigenous Peoples Act.

Looking ahead, here are three big moves that, if made over the next six months, could ensure lasting impacts on Indigenous justice for years.

1. Carrying out an action plan on Indigenous rights

The new Indigenous rights act requires the province to collaborate with Indigenous peoples to develop an action plan for meeting its objectives, as well as take all necessary measures to align B.C.’s laws with the United Nations Declaration on the Rights of Indigenous Peoples.

Understandably, the pandemic delayed a bit of this work. But it can’t be delayed any longer.

The province and First Nations need to set a deadline for publicly releasing the action plan, ensuring they each complete their work on time. The premier and First Nations should work together to lay out the full long-term vision and first set of concrete steps for getting there.

Horgan’s NDP promised to improve Indigenous input on provincial policy and legislation by creating a dedicated secretariat to ensure new laws and procedures are consistent with UNDRIP. This should be a key priority.

In the meantime, an interim mechanism should be established to ensure new laws are vetted, perhaps by a panel of Indigenous legal experts who advise the attorney-general and premier and First Nations leadership on whether a particular law is aligned with UNDRIP.

First Nations need resources to support collaborative and iterative dialogue on this work as they develop. And as always, First Nations themselves, the proper title and rights holders, must play the lead role.

Sharing statutory decision-making is a bold and powerful tool included in the Indigenous rights act, yet the government has not implemented it. This step would take courage, since there is no precedence for such a tool anywhere in Canada.

The Indigenous rights act’s Section 7 sets out a process that allows cabinet ministers to negotiate with Indigenous governing bodies and enter into agreements on statutory decisions. (Statutory decisions are generally defined by legislation and often power rests with a minister or staff.) This creates a lot of possibilities by expanding decisions currently only held by the province and collaborating with Indigenous governing bodies on sharing the decision-making process.

It is now time to implement this approach so that decisions can be made more effectively and collaboratively.

3. Address tensions before they become a conflict

The province should take action to avoid escalation of big disputes on hot issues — for example, Horgan’s campaign promise to support a two-year deferral of any old-growth logging recommended by his government’s expert panel. 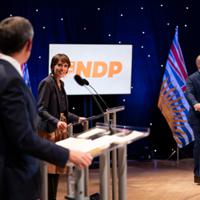 Governments and Indigenous peoples clash when the former delays action on outstanding problems. And when problems are ignored, they continue to escalate. The government has the responsibility to address nascent tensions before they become violent clashes.

Wet’suwet’en members and hereditary leadership clashed with the B.C. government in January over the province’s approval and support of the Coast GasLink pipeline without the proper title holders’ consent. For many years, multiple governments have wrongly assumed that support from elected band councils would be sufficient. That error led to months of highway and rail line blockades. While the conflict exposed the challenges of recognizing who legitimate governing bodies are, this is an issue that only First Nations themselves can figure out.

To be sure, the circumstances surrounding Coastal GasLink were created by successive B.C. and federal governments, who ignored tensions that later brought division and conflict.

The BC NDP secured a victory never before seen in this province, the first New Democrat government to be re-elected under the same leader. At the beginning of its new term, with many of its commitments to Indigenous rights still unfulfilled, these three big moves for affirming Indigenous peoples’ rights would be the right place to start.