He says it’s the biggest “civic mobilization since the Second World War” and “we all have a moral obligation to take care of each other.”

The good news is that most provincial leaders seem to feel the same way. The bad news is that one premier is not supporting the “Team Canada” approach — in at least one important respect.

That premier is Alberta’s Jason Kenney. He’s failed to answer “the call of duty” when it comes to keeping people on payroll during the COVID-19 crisis.

While the prime minister and other premiers are holding up their end of the bargain by avoiding layoffs and exhorting employers in the private sector to do the same, Kenney is adding to the COVID-related unemployment carnage with carnage of his own.

For example, with little warning or consultation, Kenney recently announced that 25,000 K-12 education workers will be laid off. He’s also proceeding with an austerity budget that has already led to thousands of layoffs at universities, colleges and municipalities.

But that’s not all. Shockingly, the provincial government is also cutting doctors’ salaries by as much as 30 per cent, even as they gear up to confront COVID-19. Some doctors say they will have no choice but to close their practices.

And the government still plans as many as 6,000 layoffs for nurses, paramedics, lab techs and other frontline health-care workers — after the pandemic crisis passes, of course.

The education layoffs are said to be temporary, but the other cuts are intended to be permanent. While other provinces are rallying to support their citizens during the COVID-19 pandemic, Alberta's United Conservative Party is using the crisis as a pretext to pursue an ideological agenda of shrinking and privatizing public services.

This stands in stark contrast to Canada’s other provincial Conservative powerhouse, Ontario’s Doug Ford, who echoed Trudeau’s sentiment that governments shouldn’t be making a bad situation worse by adding to the ranks of the newly unemployed.

After Kenney’s education bombshell, Ford was asked if he, too, would consider laying off public service workers during the crisis. He responded with words Alberta education workers would have loved to hear from their premier, but didn’t.

Ford is not alone in his sentiments. Other than Kenney, literally no other provincial government is laying off significant numbers of workers at this time. In B.C., jobs have been guaranteed at least until the end of this month as the government and stakeholders develop plans.

Kenney’s justifications for his wanton acts of job destruction in the midst of a crisis are weak and sometimes offensive.

For example, his first line of defence has been to say that the laid-off workers were “not working” after the province closed schools. But the truth is that almost all of the administrators and educational assistants who got pink slips are busier than ever helping school boards prepare for the transition to online classrooms.

Kenney has also outrageously blamed his decision on Alberta’s popular, steady and hyper-competent chief medical officer Dr. Deena Hinshaw. It’s true Hinshaw ordered the closure of schools to help stop the spread of COVID-19. But that’s not the same thing as ordering 25,000 layoffs. That was Kenney’s choice, and his alone.

Kenney has also been talking out of both sides of his mouth. On one hand, he says Alberta can’t afford the $128 million needed to keep education workers on payroll. But, on the other hand, he doesn’t blink when announcing $7.5-billion in direct investment and loan guarantees for a pipeline (a project that was rejected by private investors as too risky).

Finally, Kenney has justified mass layoffs during a crisis by saying that public sector workers should not be treated differently than the private sector workers who have been losing their jobs in great numbers, and that the provincial government is faced with the same financial realities as other employers, including municipalities that have also been announcing layoffs.

This is where Kenney demonstrates that he just doesn’t get it.

The fact that hundreds of thousands of private sector workers have lost their jobs as a result of the COVID-19 crisis is exactly why provincial and federal governments should avoid layoffs which would add even more Canadians to the unemployment lines.

The goal of all governments in the short to medium term should be to keep as many people attached to their jobs and incomes as possible until the crisis has passed — as opposed to setting them adrift or saying, as Kenney has, that they can apply for employment insurance or the new federal emergency response benefit.

Should Canadians living in other provinces foot the bill for Kenney’s decision to cut Alberta public servants loose during a crisis, thereby offloading Alberta’s costs to the federal government?

Imagine if other provinces did the same. Federal relief programs that are already stretched would become overwhelmed because provinces refused to shoulder their fair share of the burden.

Perhaps most importantly, Kenney fails to acknowledge that provincial and federal governments are fundamentally different than private sector employers (and even municipal governments), both in their roles and in the options they have to deal with a crisis.

Municipal governments, for example, are forced by legislation to balance their budgets every year. So without the help of higher orders of government, they often struggle to keep people working during a crisis. And private firms have a hard time getting money for operations when their income and access to credit start drying up so layoffs become unavoidable. 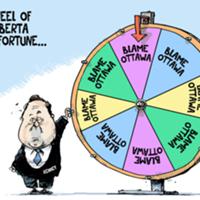 Game Over for Kenney

This situation for provincial and federal governments is dramatically different. Unlike private firms, which are focused on profits, the role of government is to defend the public interest, especially during times of crisis. Governments can also raise and spend money much more easily than private firms during a crisis. They need to exercise these powers for moral reasons (they have an obligation to help their citizens through tough times) and economic reasons (they need to shore up consumer and business purchasing power so that recessions don’t become depressions and recoveries can begin more quickly).

The bottom line is that during turbulent times like these, layoffs by private firms are often inescapable. But public sector layoffs are a choice for governments — a choice they should never make if they are really focused in putting the interests of their citizens first.

That’s why I’m pointing the finger at Jason Kenney. Nothing is forcing him to add to the pain of his citizens. That’s his choice. Unlike his counterparts in other provinces, including other Conservatives like Doug Ford in Ontario, he has failed to “answer the call of duty” and, in doing so, he is failing his citizens during their time of need. He should be ashamed of himself.