Every afternoon, B.C.’s provincial health officer Dr. Bonnie Henry and Health Minister Adrian Dix offer a daily update on the COVID-19 situation across the province. Both offer solid performances, calm, frank and reassuring even when the news is grim.

But it’s not really news. Each day’s new cases and deaths reflect some fraction of those who were infected up to two long weeks ago. And some of those mid-March cases may have been caused by persons who showed no symptoms but still carried — and shed — the virus that causes COVID-19.

Dr. Henry downplayed that possibility in a March 31 interview on CBC Radio’s The Early Edition, saying a few such cases might exist and might be a “challenge,” but they were not enough to be concerned about.

Events have already overtaken her reassurances. That same morning, China’s National Health Commission dropped a bombshell: as of Monday, the Chinese are aware of 1,541 asymptomatic COVID-19 carriers in the country, including 205 imported cases. What’s more, China will henceforth report these as active cases and quarantine them and their contacts just like symptomatic cases.

Public health experts elsewhere in the world might be excused for swearing under their breath about Chinese secrecy. Clearly, the National Health Commission has known about such cases for some time without publishing anything about them. But the new revelation helps to explain why everyone in China is wearing a mask, even when the World Health Organization says only symptomatic people should wear them.

Our own B.C. Centre for Disease Control says the same thing: “It may be less effective to wear a mask in the community when a person is not sick themselves. Masks may give a person a false sense of security and are likely to increase the number of times a person will touch their own face (e.g. to adjust the mask).”

And that also explains why Dr. George Gao, the head of China’s disease control centre, told Science magazine last week that the biggest mistake the West is making is our failure to make everyone wear a mask: “Many people have asymptomatic or presymptomatic infections. If they are wearing face masks, it can prevent droplets that carry the virus from escaping and infecting others.”

These developments lend weight to an opinion piece published in CMAJ, the journal of the Canadian Medical Association, on Friday. Its author, Dr. Peter Phillips, is head of the infectious diseases division of the UBC School of Medicine.

Dr. Phillips is blunt: “Canada’s response to the COVID-19 pandemic is not strong enough. Despite school closures, measures being taken at borders to minimize spread and social distancing efforts — and despite the recent announcement of $82 billion to support the business community and the economy — more effort is urgently needed. New cases doubled over four days before reaching 1,426 on March 22, which was after a week of containment measures.”

Dr. Phillips continues: “Canada’s initial lack of a robust border policy or mandated supervised quarantine program for both incoming travellers and contacts of documented cases has impaired our ability to contain the epidemic here. If the main goal of our response is merely to try to flatten the epidemic curve in order to reduce the extent to which hospitals become overwhelmed, we will fail in Canada.”

Pointing to Taiwan’s “early and multifaceted response,” Dr. Phillips argues that we too should have a tougher border policy, supervised quarantine, and “rigorous case finding with contact tracing.” Admitting that China’s “draconian” containment measures couldn’t be taken in Canada, he argues that South Korea’s policy is applicable to us: “extensive testing for case finding, extremely detailed contact tracing, plus mandatory supervised quarantine with fines for infractions of up to US$2,500.”

A ‘serious underestimation’ of the pandemic

Dr. Phillips criticizes Canada’s reluctance to take such aggressive steps: “The federal government’s reluctance to adopt disruptive measures until very recently reflects a serious underestimation of the gravity of this pandemic. The upfront costs and disruption to both society and the economy associated with a comprehensive containment strategy are considerably less than that related to an uncontrolled outbreak requiring mass community quarantine. The benefits from the important vaccine and drug treatment development initiatives are likely many months to years away. Canada’s government needs to do more and to do it now.”

As with COVID-19 case numbers, we find it easier to deal with immediate problems than with those of a month or two from now. As feeble as our response has been, it’s brought the Canadian economy to its knees, paralyzed education and weakened our regular health and dental-care systems. Doing still more, especially in a democratic country, seems impossible — not just politically, but logistically. But we must. As Dr. Joanne Liu, former head of Medecins San Frontieres, has warned us, “There is no room for wishful thinking. The right mindset is to prepare for the worst-case scenario.”

Dr. Phillips, like the Taiwanese and South Koreans, argues for a rapid scale-up of diagnostic testing. This is hard to do in the absence of testing kits and even the swabs needed to get samples. He adds: “Although limited access to testing may make it impossible to test travellers with mild COVID-19 compatible symptoms right away, it is essential that such individuals be tested in the near future if we are to be successful in controlling further spread. Modification of the contact tracing protocol is needed to include testing of contacts of cases during the two days before the development of symptoms as recommended by the WHO.”

And that’s not all: we’ll have to recruit and train many more people to make the kits, run the tests, enforce border security, design and build hospitals and quarantine facilities, produce millions of masks and other personal protective equipment — and enforce personal distancing measures for months to come, at least until we have a reliable, mass-produced vaccine and effective pharmaceuticals. (Trudeau announced on March 31 that $2 billion will be spent on procuring ventilators, masks and test kits.) 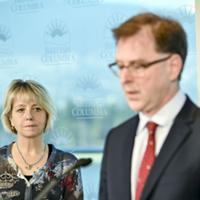 Otherwise, we’re all too likely to find ourselves in the predicament of New York, which on March 31 reported 8,470 “new” cases contracted in mid-March — as many as Canada has reported since its first case on Jan. 24. It won’t take another two months for our case numbers to double.

In an email to The Tyee, Dr. Phillips welcomed Trudeau’s invocation of the Quarantine Act on March 25, but observed: “It has finally been invoked at a late date when we already have exponential rise in our case numbers, but it remains unclear if it is accompanied by any level of supervision or enforcement. I am unaware of any fines being applied either for quarantine or social distancing breaches.”

He also commented on B.C.’s COVID-19 response: “The other main seriously disturbing announcement is the increasingly restrictive testing policy in B.C., which undermines the ability of public health to be successful in containing further spread in the community. The public health strategy has now shifted to mainly mitigation (‘flattening the curve’) and appears to be giving up on containment (suppression). Without aggressive containment strategy, the published evidence to date including mathematical modelling studies predict a much higher mortality rate.”