Carole James, B.C.’s finance minister, may have made history Tuesday when she introduced her third consecutive surplus — or “balanced” — budget.

The task of ensuring that the provincial government’s yearly revenues exceed annual expenditures has been achingly difficult for much of the past half-century or so. Indeed, since the end of the fiscal year 1971/72, when the legendary Social Credit premier WAC Bennett left office after a 20-year reign, B.C.’s deficits have outnumbered surpluses by a margin of 27 to 22.

That actual ratio may even be worse, as the province’s accounting systems over the last five decades often have been changed, sometimes to hide or manipulate the size of fiscal shortfalls, and other times to correct or improve accounting deficiencies.

No party in government since the departure of WAC Bennett has been immune from the spectre of ongoing budgetary deficits and soaring debt levels, and none have been sufficiently virtuous to avoid the temptation to fiddle with the numbers.

(Actually, Bennett may have been the most egregious practitioner in provincial history, but that’s a story — a very long story — for another day.)

Social Credit governments led by Bill Bennett (WAC’s son) and then Bill Vander Zalm racked up nine deficits compared to seven surpluses. The New Democratic Party in government from 1991 to 2001 under a series of premiers had eight consecutive shortfalls and then a single — albeit gargantuan — surplus in their final year in power.

And the BC Liberals — who, like their predecessors, had the temerity to enact “balanced budget” legislation — had nine deficits along with just seven surpluses.

Given the province’s less-than stellar budgetary record over the last five decades, it seems somewhat remarkable that the current NDP government led by Premier John Horgan has yet to see a fiscal shortfall.

The secret behind James’s fiscal success is that British Columbia’s economy has been booming for the last number of years — especially in comparison to the rest of Canada. If the old maxim of people “voting with their feet” is accurate, it appears to be borne out by the on-growing growth of the province’s population.

Consider that in mid-2017 — when Horgan’s New Democrats, along with a trio of Green MLAs, defeated the BC Liberals on a vote in the Legislative Assembly — B.C.’s population was slightly above 4.9 million.

This summer, according to estimates by BC Stats, the comparable number will hit just over 5.14 million — a rise of 222,000 people in just three years, or a stunning average increase of 74,000 new residents annually.

That remarkable population growth brings with it numerous economic and fiscal effects. Consider:

B.C.’s labour force (employed and unemployed) this year is expected to reach a historic high of 2.72 million. Astoundingly, the province’s labour participation rate is at a near-record 65.5 per cent.

Household income is forecast this year to hit $279 billion, another record.

Total compensation for employees — that is, the wages, salaries and benefits paid to workers — similarly is expected to hit an all-time high of nearly $158 billion. Corporate profits in 2020 are pegged at $31 billion, just slightly below historic records set in 2017 and 2018.

And all of those new B.C. residents need a place to live, and in 2019 housing starts — which many NDP critics forecast would plunge downward — instead came to a whopping (and record) 44,932.

It should be no surprise that all of this stellar economic activity has had a positive influence on British Columbia’s finances.

In 2016/17, the final full fiscal year under the BC Liberals, total government revenues — using GAAP, or generally accepted accounting principles — came in at $51.4 billion. For next year, fiscal 2020/21, James estimates that total income will be $60.6 billion.

Even property-related tax revenues, notwithstanding the vagaries of the province’s real-estate market, have remained robust. Receipts from the property tax grew from $2.3 billion to $3 billion, and from the controversial property-transfer tax stayed nearly static albeit slipping slightly from $2 billion to $1.6 billion.

That enduring strength from B.C.’s own-source taxation — along with federal transfers which rose over the period from just under $8.2 billion to nearly $10 billion — has more than offset disappointing revenues from natural resources.

It’s easy now to forget that much of the BC Liberals’ fleeting fiscal surpluses under former premier Gordon Campbell were due to a seven-year stretch from 2002/03 to 2008/09 when natural-gas revenues exceeded $1 billion annually — and in 2005/06 hit an eye-watering $1.9 billion.

Those days are long gone, however, and James’s forecast for natural-gas receipts in 2020/21 is a relative minuscule $207 million. And even that number — the highest in six years — may prove optimistic.

Of course, no current examination of British Columbia’s finances can overlook the recent “dumpster fire” at the publicly-owned Insurance Corp. of B.C. The Crown corporation made a positive contribution to the province’s bottom-line from 2002/03 to 2014/15, but recent history has seen billion-dollar-plus losses in 2017/18 and 2018/19.

The finance minister now expects a very modest profit of $86 million in 2020/21 after five consecutive years of losses.

Let’s take a quick look at what’s been happening in recent years with the province’s expenditures and new development in James’s latest budget.

Outlays on health, which four years ago added up to $19.7 billion, are forecast to come in next year at almost $24.3 billion.

Education spending over the same time four-year period will rise from $12.5 billion to $15.2 billion, and for social services, from $4.2 billion to $6.2 billion.

Interestingly, a proportion of provincial GDP revenues in 2020/21 are pegged at 19 per cent, while expenses are budgeted at 18.9 per cent, thereby leaving a tiny sliver of a surplus — $223 million.

That number, barring unforeseen events, likely will end up being considerably larger. James recorded a surplus of more than $1.5 billion in 2018/19 (her first full-year budget) and the current year, 2019/20, appears on track to end with a surplus of about $700 million.

Two categories of expenditure are worthy of a closer examination.

First, interest payments on B.C.’s debt have been in a long-term decline. For example, in the late 1990s yearly interest costs were in the range of 2.3 to 2.4 per cent of nominal GDP. This year the comparable number is a mere 0.9 per cent.

The decline appears even more dramatic when considered as a proportion of the province’s total annual budget. In the late 1990s, interest charges ate up more than 10 per cent of yearly spending. But by comparison, this year that number is just 4.5 per cent.

Second, changes in the province’s accounting system, dating back to the 1990s and reinforced with the adoption of GAAP in 2004/05, means that only about 15 per cent of capital expenditures are counted as an expense in the current fiscal year.

All British Columbians gain from these capital outlays because everyone benefits from the construction of long-lasting assets — roads, bridges, hospitals, schools and so on — that contribute to the well-being of provincial residents and facilitate ongoing and future economic growth.

Not surprisingly, given the manifest growth in annual capital spending in recent years, the total value of the province’s tangible capital assets has climbed from $23.4 billion in 2004/05, to an expected $57.9 billion in the coming fiscal year.

It is evident that B.C. has had a solid run of stellar economic growth in recent years, and positive fiscal results — surplus budgets — as a result. Will the good times last?

In a world of uncertainty — global trade disputes, the COVID-19 coronavirus, and a presidential-election year in the United States (along with a famously disruptive and unpredictable incumbent in the White House) to mention a few — it would be unwise to make a prediction.

But there are positive indicators in British Columbia, including these that are unrelated to James’s budget:

Ten weeks ago, in November, Amazon announced plans to triple its planned office space in downtown Vancouver from 300,000 to 1.1 million square feet. The additional space will allow the corporate giant to increase its local workforce to 5,000 corporate staff.

Just two weeks ago, on Jan. 28, Canadian e-retailer Shopify announced that it intended to open its first permanent office in Vancouver, and hire as many as 1,000 workers.

And last fall, CBRE — the U.S.-headquartered commercial real-estate services firm previously known as Coldwell Banker Richard Ellis — published its 2019 Tech-30 report, which studied the impact of the high-tech industry on cities in across North America. Incredibly, Vancouver over the last two years was the number one-ranked city for "high-tech job growth," followed by San Francisco, Toronto, Seattle and Austin.

As suggested at the top of this column, Minister of Finance Carole James’s latest fiscal plan may be historic insofar as it is her third-consecutive “balanced” or surplus budget. 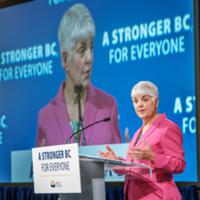 Budget 2020: New Taxes on Pop and the Rich, Plus a Boost for Health Care

Over the last half-century or so, just a trio of B.C. finance ministers — Carole Taylor, aided by billions of dollars in windfall natural-gas revenues, and Michael de Jong, both BC Liberals, and Evan Wolfe, a Socred back in the late 1970s — have successfully brought in three “balanced” budgets in a row that actually ended up in the black by the end of the fiscal year.

That feat has never been achieved by a finance minister in a New Democratic Party government.

True, the province’s first NDP premier, Dave Barrett — who also served as his own minister of finance — also introduced three consecutive balanced budgets, but his government was defeated in December 1975, prior to the end of the 1974/75 fiscal year.

It is debatable whether Barrett’s last budget would have had a surplus — the global economy was being slowed by the first OPEC oil shock — but Bill Bennett’s incoming Socred government made certain that the fiscal year ended with a sizeable deficit.

So James, if John Horgan’s NDP government stays in office through to the spring of 2021, and if the global economy does not experience a dramatic downturn, could end up as the BC NDP’s first-ever finance minister to rack up three consecutive balanced budgets.

A historic feat, to be sure.