The BC Supreme Court recently grappled with some big issues.

Is First Nations’ smudging religious? If it’s demonstrated in a classroom, are the children’s religious freedoms under the Canadian Charter of Rights and Freedoms infringed?

And what role do the Truth and Reconciliation Commission’s Calls to Action and the United Nations Declaration on the Rights of Indigenous Peoples play in how we teach Indigenous culture in schools?

The court’s decision Wednesday rejecting a lawsuit over Indigenous cultural curriculum was heartening for anyone who believes education is critical for moving toward reconciliation.

The case was launched on behalf of Candice Servatius, a Port Alberni mother who argued that a classroom demonstration of smudging by a Nuu-chah-nulth Elder and a demonstration of hoop dancing violated her child’s right to religious freedom. (The dancer had said a prayer before he performed.)

She wanted such demonstrations banned from schools.

Justice Douglas Thompson rejected the arguments in his decision.

The Nuu-chah-nulth Tribal Council, which represents 14 First Nations on the west coast of Vancouver Island, has been working with School District 70 for many years to provide cultural education to children. Negotiated agreements set out understandings on how cultural education can occur.

As part of that curriculum, an Elder was brought into the classroom to demonstrate smudging. No children were smudged, nor were they part of the demonstration. They were also given the opportunity to leave the classroom if they were not comfortable. The school sent a letter to parents about the program the day before the smudging; by the time Servatius went to discuss it the next day, the demonstration was over.

Smudging is one small part of our culture as Nuu-chah-nulth. It involves the burning of cedar or other medicinal plants for many purposes, including to clear one’s mind or clear a space of negative energy.

The Nuu-chah-nulth decided to intervene in the court case. The most important reason was that we consider smudging to be a part of our culture and spirituality, and not religion. There is no Nuu-chah-nulth religion, so how can another person’s religious freedoms be infringed by a cultural demonstration? Nuu-chah-nulth strongly feel that it’s not up to some non-Nuu-chah-nulth person to tell us what our religion is.

The Nuu-chah-nulth also intervened to ensure that we can teach all children in schools about our culture and to ensure a safe space and a positive learning environment for our children. About 30 per cent of children in the school district are Nuu-chah-nulth and their graduation rates are half the rates of non-Indigenous students. Studies have shown that where culture is used and taught in a school, students thrive. We need our children to succeed in the system.

The Nuu-chah-nulth realized that the implications of this case could be immense. If the court ruled that nothing spiritual could be taught in the schools, students would be denied the chance to learn about a large part of our culture. The decision could affect all school districts in B.C.

We knew we needed to get involved and to provide the court with guidance on our culture, our efforts to teach it and our agreements with School District 70.

We also wanted to inform the court about the link between this type of program and the Truth and Reconciliation Commission’s calls to action on education and the UN Declaration on the Rights of Indigenous Peoples. The timing could not have been better, as the province’s legislation adopting the declaration was moving through the legislature as the case was heard.

Thompson’s ruling cites the province’s legislation in his judgment.

“Section 3 of this Act provides that in consultation and cooperation with the Indigenous peoples of British Columbia, the government must take all measures necessary to ensure the laws of the province are consistent with UNDRIP,” he wrote. “For the purposes of our case, it is notable that UNDRIP includes the right for Indigenous peoples to ‘manifest, practise, develop and teach their spiritual and religious traditions, customs and ceremonies.’”

The act also establishes the right to “the dignity and diversity of their cultures, traditions, histories and aspirations which shall be appropriately reflected in education and public information,” he noted, and the right to “promote, develop and maintain their institutional structures and distinctive customs, spirituality, traditions, procedures, [and] practices.”

Clearly, the obligations of the UNDRIP Act and the recommendations of the TRC were important considerations in this case, as was the legacy of the Indian Residential Schools and how it continues to affect our children.

I sat through several days of the hearing. It was difficult to hear an expert witness called by lawyers for Servatius maintain that evangelical Christians view our culture and spirituality as involving demonic, dark powers in unseen supernatural worlds. I hope we do not have to keep going through these types of trials where such negative things can be said about our culture.

It was painful to hear lawyers for Servatius claim that the classroom demonstrations were similar to the indoctrination of Indigenous children in residential schools.

“My last comment before addressing the substance of the arguments is with regard to the petitioner’s submission that the School District’s position is ‘in a certain way, an echo of the gross abuses of the residential school days where First Nations children were taken from their homes, deprived of family support, and compelled by the state to participate in religious practices against their will,’” Thompson wrote. “I agree with the respondents and the NTC that this aspect of the petitioner’s argument is insensitive and regrettable hyperbole, especially considering the magnitude of what occurred a few kilometres down the road during the 82 years that the Alberni Indian Residential School was open.” 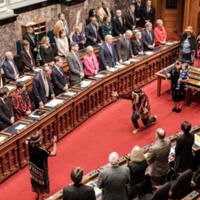 I am very glad the justice recognized the insensitivity of things said by the petitioner and her counsel. I am sad that racism can still be given voice in our courtrooms. (When I asked the Minister of Justice and Attorney General on another occasion why this was still happening in courtrooms when it wasn’t acceptable in public spaces, he could only answer that they are working towards training their justices on cultural sensitivity.)

This case has created a lot of conversation on social media, and has reverberated nationally and internationally. A lot of people marvelled that in this day and age such a lawsuit could occur, as many universities and government buildings provide smudging spaces for Indigenous peoples.

And many people criticized Servatius and the Justice Centre for Constitutional Freedoms for launching the suit. In fact, it has helped to create an awareness of First Nations’ cultures and some of the challenges we face on a daily basis.

Servatius and the centre are reportedly considering an appeal. They should instead recognize the decision’s clarity and that continuing with these arguments would create more negativity.

The decision was a victory for children. They can continue to be taught about First Nations culture, which can lead to tolerance and understanding and help eradicate racism, bias and discrimination.