Last week we put forth a proposition: what if Vancouver took $20 billion worth of city-owned land and repurposed it for permanently affordable housing and nature parks?

That landed us on the radio several times, and many people commented. A tweet by Mira Oreck, who worked closely with Vision Vancouver Mayor Gregor Robertson and then NDP Premier John Horgan, echoed many who objected:

“How about we densify the city first and then talk about this? This idea seems like a way to avoid the real issue of single family homes dominating our city.”

Similarly, this tweet from BC Liberal MLA Suzanne Anton, former BC Attorney General and Minister of Justice:

“Stop eying green space! Come to my ‘hood and rezone 41st and Dunbar. Thousands of units. Go anywhere south of 41st and look around. A sea of lonely single family homes. So much room. So little imagination. This is a terrible idea.”

We appreciate the engagement; however, our answer is that Vancouver’s leaders have for decades promoted additional density. Sadly, such efforts have not reduced housing prices. Why? We will explain — and in the process show why bolder solutions are in order.

First, let’s look at what isn’t working (while some pretend it will be enough).

Taxpayers are still subsidizing the construction of unaffordable purpose-built rentals. We still leave it to the province and the feds to supply truly affordable housing, and are asked to be grateful when promised funding for 1,100 units when we really need tens of thousands.

The mayor, meanwhile, seems to be raising the white flag by telling the Vancouver Board of Trade that prospects for the middle class, and presumably the working class, must continue to dim in the city he leads.

"In the '80s, the vast majority of the city was middle class but these people have been pushed east. If you're an employer, your workers are needing to travel further and further. You need a regional approach." @BoardofTrade #vanpoli

We authors of this column, on the other hand, refuse to accept what appears to us to be an existential threat to the city we love. For us, the status quo is not an option.

We weren’t kidding when we submitted our golf course idea. Our goal was to show that to be serious, the proposed approach must match the scope of the problem — converting lightly used fairways, for example, to 20,000 units of permanently affordable housing at no cost to the taxpayer.

No honest discussion of Vancouver’s housing crisis can begin without introducing this simple fact: The problem is the price of land.

The core challenge is that city land prices are out of control, as are urban land prices around the world. In many global cities, land has inflated beyond the reach of average wages, no matter what local policies are imposed on immigration or zoning or taxation. As an asset for storing global wealth — like stocks, bonds or gold — urban land keeps inflating.

Adding density does not reduce home prices, or rents. In Vancouver, we’ve seen adding density merely increases the value of the land beneath denser projects, which face little downward price pressure because they remain desired assets for wealthier buyers. This drives unit costs beyond affordability for average wage earners.

It’s counterintuitive, but true. Take a parcel with a single home worth a million dollars. Allow ten times the density on that parcel. Would not the cost per unit drop to $100,000? No. Sadly, as soon as the city even hints at this kind of change, the land speculators move in and bid up the price of this land to ten times its original price.

This is because land is priced not per square foot of ground but by the “buildable” square feet allowed by city zoning. The most notorious example of how this propels unit costs into the stratosphere is the White Spot parcel on Georgia, which was recently bought for $245 million by a Hong Kong holding company. That works out to about $4,800 dollars per square foot of dirt. Which means each interior square foot of the final building must fetch over $600 per square foot “buildable” (based on city-approved density) for its share of the dirt below. Add in construction costs and developer profits, and the result is that where a hamburger joint once stood, 800-square-foot units will sell for at least a million dollars — and the global elite will pay it.

If we accept that the problem of affordable housing is not a problem of insufficient density but a problem of the market inflating the price of urban land based on city-approved density, what can be done?

We suggest three distinct approaches that are in measure to the scale of the problem.

1. Use city-owned land for non-market housing (and golf elsewhere).

This is the South False Creek model, where the city most successfully provided attractive housing for a variety of incomes, maintaining a high degree of affordability by retaining the land underneath.

Unfortunately our crisis is so severe that nearly 50 per cent of people who may want to work and raise a family in our city are currently priced out. These are primarily young people who work in the service or creative fields and who make incomes far too low to afford family appropriate homes, condo or rental units in the city. But surrender, Mayor Stewart, is no option. We have identified the only parcels of land owned by the city large enough to address this problem — three golf courses.

2. Tax new development and direct these funds to non-market housing.

Given the root of the problem is land price, attack it directly. Introduce a tax strategy that both limits land price inflation and produces revenues large enough to solve the crisis. Along the Broadway Corridor, for example, the city could impose development taxes (known as Community Amenity Fees) potentially producing over $12 billion that could go to non-market affordable housing options. Developers must factor these taxes in when bidding for land, lowering the “residual” (economically viable) purchase price of land. One city that helped solve its affordable housing challenge this way is Vienna, Austria. Read about that success here.

A third option would be to only allow density increases throughout the city in return for permanently affordable housing. Vancouver has 60,000 detached dwelling parcels (commonly called single-family homes though we now allow up to three units per lot). The city could allow all these parcels to have up to six dwelling units in return for two or three units being permanently left at affordable rates (through deed restriction or through deeding those units to non-profit housing corporations). This solution, tied to a requirement to preserve heritage structures, could have city-wide benefit without disrupting the look and feel of neighbourhoods. 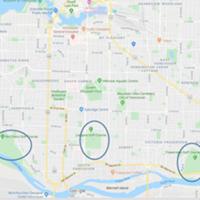 Time for Vancouver to Turn Its Golf Courses into Homes

Contrast these solutions — which would create real change — to the small, incremental and ultimately grossly inadequate ideas on offer by Vancouver’s political leaders.

Let’s have the discussion we need. Let’s acknowledge that Vancouver’s housing market is completely broken. And that the problem is not the cost of the house but the cost of the dirt beneath it — dirt the world will keep buying long after the last working and middle-class person has been driven out of the city.

Most Vancouverites understand at some level that the housing crisis requires a bold response. With boldness, comes, yes, controversy. But the city, through the land it owns and the power it has over land value exercised by the instruments of zoning and development taxes, has all the power it needs to fix this problem.

Our leaders merely need to choose to lead.