What if we told you that citizens of Vancouver own over three square kilometres of prime land worth $20 billion at current land prices that no one can use except for a few hundred recreators in spiked shoes who pay to hit small white balls with metal sticks, spoiling a good walk?

What if we also told you we could take a giant bite out of our housing crisis, open up much of this land as accessible park lands in parts of the city that most need it, and make money at the same time?

Yes, we are talking about city-owned golf courses and how to unlock their potential for better uses. Sorry golfing friends. The thing is, we have a housing crisis. We don’t have a golf course crisis.

Subtracting the three city-owned courses would leave eight golf courses within a 25 minute drive of city hall, four of them within city limits. Vancouver, once out of the golf business, would be free to dream big. How big? This big:

Total worth if valued as housing land: $20 billion. Based on current market value for housing land, depending on allowable density, the three golf courses (19,569,427 square feet) would sell for over $1,000 per square foot.

Golfing isn’t exactly on the upswing. There are an estimated 2,400 golf courses across Canada with approximately 1.5 million “regular” golfers, according to Maclean’s. That’s one course for every 625 players. But the sport’s popularity is dropping. The number of rounds played on the average Canadian course fell 10 per cent from 2009-2014, according to a study by National Allied Golf Associations.

The planet might be grateful for the trend. Due to use of fertilizers and pesticides, the average 18-hole golf course, according to researcher Alex Valenti of UC Berkeley, produces 740 metric tons of CO2 per year, the equivalent of 123 cars.

If we want places to relax and get in touch with nature, might we suggest... parks. Vancouver has long held fast to a recreation space requirement of 2.5 acres of new park space for every additional 1,000 citizens. As the population expands away from downtown it becomes nearly impossible to find recently vacated space (such as previously industrial waterfronts) to satisfy this need.

City-owned golf courses, off limits to most, sit in the middle of long-established neighbourhoods now being transformed to accommodate new population. So split the use of golf courses, with half going to parks, the other 250 acres to housing. That still leaves enough land to house over 60,000 Vancouverites in need of affordable and market rate family-oriented shelter. These could be built not as high rises, but at family-friendly stacked townhouse and garden apartment densities.

What would make the housing affordable is the simple fact that it’s the cost of land in Vancouver that forces developers to charge such high prices for homes, but in the case of converted golf courses, the land, already city-owned, would be free. That would allow the city to specify the model of development it once embraced — 10,000 low-income family housing units, 10,000 middle-income co-op units and other forms of non-market housing (as at South False Creek), and 10,000 market-rate family housing units.* And the market-rate housing could cross-subsidize construction costs for other forms of non-market housing.

The three golf courses are ideal for situating larger, three and four-bedroom ground-oriented buildings which are so appropriate for families with children — a housing type we have utterly failed to provide in decades.

By the way, these lands are essentially flat, making the implementation of new roads and utilities relatively easy. 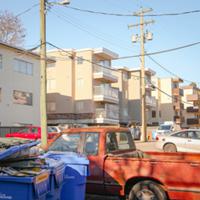 What Do We Mean By ‘Affordable Housing?’

And they connect well to sustainable transport. The Langara Golf Course is adjacent to the Cambie Corridor, and McCleery Golf Course is within two minutes walking of future light rail in the Arbutus Corridor. Fraserview Golf Course is also near the existing Interurban rail corridor, paralleling the river that connects to the future Arbutus light rail line, and near the emerging neighbourhood centre of the River District (formerly East Fraser Lands).

One more crunching of numbers to make the case. Last year’s revenue for McCleery was a modest $3.4 million and keeps slipping, declining 13.1 per cent between 2014 to 2018, according to Business in Vancouver. Unless the other two courses are clearing hundreds of millions of dollars a year in greens fees and power cart rentals, there just is no contest.

Converting Vancouver’s three public golf courses to solve its housing crisis is a hole in one.