From my home in Canada, I’ve watched in awe at how millions of youth in Hong Kong and Taiwan have been fighting for their future.

I was seven when I immigrated to Canada from Taiwan with my family, and I’ve always been curious about what my peers overseas were doing to become more civically engaged.

I was glued to social media during Taiwan’s Sunflower Student Movement in 2014, when the legislature was occupied, and Hong Kong’s Umbrella Movement later that year.

Hongkongers have been protesting against a bill that would allow local authorities to detain and extradite people wanted in China. Overseas Chinese have been showing their support for them with rallies and Lennon Walls.

But this weekend in Vancouver, they clashed on the street with nationalists supporting the Chinese state. I was there, to document it.

In Metro Vancouver, a gateway to the Asia Pacific, there are almost 500,000 ethnic Chinese in the region of 2.4 million. Geopolitical issues and tensions are brought over with waves of migrants and many of the people, including myself, still have ties to parts of Asia.

ON THE STRAWBERRY GENERATION

In Taiwan, as in the West, millennials are often written off as being selfish, spoiled and sluggish, called the Strawberry Generation for bruising easily. But I have faith that they are doing what they can to fight for their future, and inspiring adults to support youth efforts to show that the current systems are not working. — Kevin Huang

I’ve kept up with the developments in Hong Kong as citizens’ fundamental rights and freedoms are being eroded, with intent, by their local government, which is pro-China. The lack of response (except for that of the police) has resulted in protesters taking increasingly drastic measures to solicit a response from their government.

This is the 11th week of protests, and two million people — with specific rallies for mothers, seniors and professions (from lawyers to civil servants to airline workers) — have come out to march.

International pressure has a role to play, though it can go both ways.

As I kept a close eye on solidarity rallies around the world, I noticed a concerted effort by pro-China nationalists to counter those supporting the Hong Kong protesters. Tensions came to aggression and violence; one ugly clash in Sydney saw scuffles, threats and verbal abuse.

With a rally and counter-protest planned for last Saturday near City Hall, I knew it would be important to document the event and Vancouver’s part in the Hong Kong-China discord.

I put on a neutral blue shirt so I could freely walk around both camps to document the event. With a water bottle, an extra battery for my phone and an umbrella (practical, but also symbolic), I headed out to the rally.

I’m a few minutes late, as the rally was to begin at 4 p.m, but as I walked towards the intersection of Cambie and Broadway Streets I could hear the chants a block away.

From across the street I saw two sides forming outside the Canada Line train station. They were colour-coordinated: black for the pro-Hong Kong side, and red for the pro-Beijing, pro-China nationalist side. Both sides had sizeable numbers, approximately 80 people total.

The China nationalists chanted in English “One China” and, in Mandarin, “Take off your masks.” They also sang the Chinese national anthem, “March of the Volunteers.”

The rally grows. Both sides chat up passersby and hand out pamphlets.

The pro-Hong Kong side has signs in English and in Chinese, reading “Free Hong Kong” with pictures of the police brutality there. There was a banner that said: “No Rioters, Only Tyranny,” alluding to the misinformation campaign to smear the protests as riots by China and the pro-China Hong Kong government.

They also had a large sign that read: “This is also Canada’s fight.”

It warned of economic coercion by China, misinformation campaigns in Canada and the Chinese state’s detainment of Canadians Michael Kovrig, a former diplomat, and Michael Spavor, a former businessman.

The nationalist side had an overwhelming number of Chinese flags; almost all of them looked new, with fold creases on the larger ones. Someone dropped off professionally printed signs for their side that said: “Love China,” “Love HongKong,” “No secession” and “No Riot/Violence.”

I take these signs as meaning that they love the current Hong Kong government that is pro-China, which is a given. Since the 2017 “election” of Hong Kong’s chief executive, Beijing has been pre-screening candidates. The adoption of this proposal for the screening of candidates is one of the flashpoints that led to the Umbrella Movement in 2014.

Traffic authorities shut down the shoulder lane on both Broadway and Cambie.

More people show up, and it’s not even been an hour yet. Police are doing a great job keeping the two sides separate.

The pro-China Hong Kong government continues to say that the Hong Kong police are maintaining order against the “riot” and have not admitted to any acts of brutality, despite what the videos these past 11 weeks show.

The big flags are brought out.

Nationalists flip the bird with chants of “There is only one China” in Mandarin, and the atmosphere becomes very tense.

I get dragged away (lightly) by a cop for blocking the pathway to the station while taking the previous picture. It’s fine — they’re doing their job to make sure the pathway is clear.

Uh oh, nationalists chant “China is your daddy” in Mandarin.

This is a reference to the “One China” frame, with the mainland as the head of the household, and contentious regions like Hong Kong and Taiwan seen as rebellious children.

A nationalist meme that came out of China says: “It doesn’t matter how much trouble you make. China is still your dad.”

Wow. Nationalists show up in McLarens and Ferraris.

A few hours earlier in Toronto, a convoy of supercars draped in Chinese flags, revving their engines, also showed up at a rally in support of Hong Kong protestors.

I’m both surprised and not that the same show of force was used here in Vancouver.

The nationalists hand out bottled water and other drinks.

Then, right before 6 p.m., the majority leave. The Hong Kong side applauds.

“You’re off work now,” chant the Hong Kong side in Cantonese, insinuating that the nationalists might’ve been paid to show up. “Take your money and go!”

We hear that a “second shift is coming,” but it never arrives.

The police ask the Hong Kong side if they’re leaving too.

The Hong Kong side stands strong, now that only a few nationalists are actively participating.

The remaining nationalists shout, “Hong Kong is part of China. Don’t speak Cantonese!” In Hong Kong, there is worry that Mandarin will eventually take over as the lingua franca.

I decided to stand closer to the nationalists, and what I heard in Mandarin was fascinating.

They were telling each other how they shouldn’t swear at the pro-democracy side. This seems like an organizing directive coming down from the top as one way to maintain a positive public image. This is wise, as the reactions from those who witnessed their behaviour by nationalists at other counter-protests around the globe weren’t sympathetic.

One person said to his friends in Mandarin how he wanted to change Chinese Yuan into Hong Kong Dollars to throw at the other side.

Another convoy of at least six nationalist cars drive by and honk. Cops step in and tell them to stop.

Both sides have families with kids in attendance. The kids ask their families what is going on.

The Hong Kong side chants, “Thank you, police!”

But these chants quickly change to a mocking applause for the nationalists, who wave the China flag as they enter the train station to leave the rally.

Slogans and posters found around the train station. Leaflets and petitions are distributed by the pro-democracy side. A Lennon Wall is set up.

One elderly woman, who’d be around for hours, was still shouting in Mandarin about how supporters of Hong Kong protesters should be ashamed for not being patriotic to China. In English, she kept shouting, “Shame!” There were several attempts by other nationalists and the police to calm her down, asking her to sit down, even to drink some water, all to no avail. I heard her saying how Hong Kong should unify with China, and that it’s been too influenced by Western powers and values.

The Hong Kong side, the original organizers, call the rally to an end.

They thanked the crowd of about 100 in attendance and the police for keeping both sides in order.

There was originally an event downtown at Robson and Granville Streets to screen video evidence of police brutality in Hong Kong, but it was cancelled due to threats by the nationalists.

The nationalists showed up anyway, without anyone to counter. They sang the Chinese national anthem, waved flags and chanted many of the same slogans in the afternoon.

I believe this is only the beginning of global politics played out in Vancouver.

There were two more events the next day. One was at the Chinese Consulate on Granville Street, well attended by both sides.

Another was a group at a church praying for human rights, freedom and democracy in Hong Kong, which was surrounded by a crowd of flag-waving nationalists. Police had to escort the worshippers out. 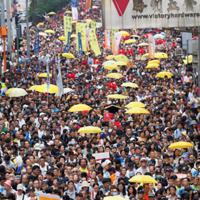 The Steady Attack on Freedom in Hong Kong

Canada and the European Union have since issued a joint statement about the importance of upholding Hongkongers’ freedoms, such as peaceful assembly.

The China embassy in Ottawa then told Canada to “immediately stop meddling in Hong Kong affairs and China’s internal affairs.”

With west coast B.C.’s ties to China since pre-colonial days, the long history of trade, immigration, and relations is now being tested as modern China exercises its influence and soft power on the global stage. Huawei and the detention of the two Michaels are proxy battles being fought between global superpowers and alliances.

I wonder how Canada will respond given its long history of relations with China.

I showed up on Saturday with the freedoms I am afforded here in Canada, as I watch freedoms quickly and aggressively infringed upon in Hong Kong. I will continue to help share their story.