I’m not having kids, because it’s better for the environment. There already are too many people in the world. Plus, I can’t afford it, and it will get in the way of my career.

Wajahat Ali, author and contributor to the New York Times, listed these points at the beginning of his TED talk this April in Vancouver while I sat there in the audience thinking, “Yeah, spot on.”

But I was caught off guard by what he said next: “Despite all this chaos, I still think we should have babies. I believe we can and should fight for the Earth and humanity side by side.”

My mind flooded with reasons I disagreed. Let’s focus on immigration instead! The population can’t perpetually grow! I reached for my notebook and began jotting questions for Ali.

At 27, childless and in a career outside of Silicon Valley, I was an outlier with a media pass in a crowd of people who’d paid $10,000 or more to be there. Most of the others listening were old enough that their own children were grappling with the issue Ali raised. For me, the question was nothing abstract. The clock is ticking down, and I had already made my choice: No kids.

In fact, I’d had this discussion with my mother the week before, much to her disappointment.

With the first specks of grey emerging in his stubble, Ali is an unlikely advocate for spawning. In his words, he’s “an exhausted dad, ruled by two dictators in diapers.”

“I used to be young, happy and fresh before kids. Now, I’m a broken husk of a man,” he said. On the screen, a slide showed two children crawling on his back. But the endearment in his tone made it clear he had no regrets.

I’m not alone in my reluctance to become a parent. None of my friends have kids and few are thinking about it. Those who are, don’t feel ready. Parenting seems overwhelming. I don’t want to leave my children to a doomed world. And I couldn’t offer them what I had growing up. My parents married and got their first mortgage at 21. At the age I am now, they were decorating a room for their unborn son, me.

Plus, part of me just doesn’t want to go down that road. Is it the all-consuming effort, risk, uncertainty or something entirely different? I can’t exactly put my finger on it.

Ali pointed out that if enough people fall into my line of thinking we’ll trigger “a domino effect” with serious consequences. When a population’s percentage of young people quickly dwindles, you get smaller a workforce. This leads to less tax revenue to support social safety nets — namely, pensions and health care, already strained by our aging population.

We need to "reorient from the reactionary, fear-based lens of the future,” he said. "Maybe we should start worrying about what is going to happen if we stop investing in people.”

I tracked Ali down after his talk.

“Isn’t this why we have immigration?” I asked. After all, we already rely on immigrants to prop up our social programs and have done so for almost 50 years. Canada’s fertility rate has been below replacement level — 2.1 births per woman — since 1971. We’re down to 1.6 births per woman now. Yet our population has continued to increase.

I warmed to my argument. Our immigration system, I told Ali, already prioritizes young working professionals, which helps keep the Canada Pension Plan afloat. It’s the same story in other developed countries.

Even Japan, which now produces more diapers for adults than for babies, is finally having to open its doors. But it might be too late. A shrinking, aging population is straining the country’s health care and pension systems, public debt has surpassed 250 per cent of GDP, and labour shortages are widespread.

I felt that immigration offered the perfect solution to the worries Ali raised, while also easing the strain on overpopulated areas. Developed countries need people, and many developing countries are rich in that resource. On top of that, millions more will be on the move in coming decades as climate change pushes them from their homes.

Ali thought I was on the right track. Rejecting immigration harms everyone’s future. “This anti-immigrant vibe is actually going to be an act of self-immolation for Europe and America,” said Ali, himself the son of Pakistani immigrants. Here in Canada, if we didn’t take in hundreds of thousands of immigrants every year our population would shrink, and with it our economic growth.

But immigration alone won’t cut it. “That’s what they’re trying to do in Europe and it still hasn’t been enough,” he told me.

Ali’s formula for a better future struck me as a long shot: Embrace immigrants, support “pro-natal” policies and count on the resulting stable, thriving economies to do the magic of keeping overall global birth rates low.

He pointed to Sweden and France as two European countries setting examples. These countries today have the highest fertility rates in Europe — both hovering just below replacement at around 1.9 births per woman — largely thanks to affordable health care, affordable child care and extended paid parental leave. The bottom line is people want to have babies without breaking the bank, putting their life on hold and career on pause.

But such system supports wouldn’t work if the same countries weren’t also admitting large numbers of working-age migrants to prop up these programs by providing services and filling jobs that need doing.

Hungary took a different approach. Prime Minister Viktor Orban has long led the anti-immigrant march in Europe, telling his citizens, “Immigration means surrender.” His solution: wall off refugees and offer tax exemption to mothers with four kids or more. The country’s population continues to fall, the birth rate is below 1.5 and emigration is on the rise.

“It seems, in Europe, karma is going to be brown and Muslim,” Ali quipped.

Germany took a different approach to its aging citizenry. Only a few years ago, the UN estimated that a mere 54 per cent of Germans would be in the workforce by 2030. The government responded to that demographic “time bomb” by adding support for families with children, including free home visits by midwives and household help. At the same time the country widened its doors to more immigration. Result: a boosted economy and Germany’s highest birth rate in 45 years.

Behind all these numbers lies another story. People started having fewer babies long before we were talking about climate change or Millennials couldn’t afford a place to live. Fertility rates drop as countries develop, because education and economic opportunities increase — particularly for women — as does access to contraceptives.

Talking to Ali, I began to see the nuances in a decision I had made long ago. On the one hand, if I abstain from reproducing I can shrink my carbon footprint. According to founder of the Voluntary Human Extinction Movement, my potential child would cost the earth 8.5 hectares of potential wildlife habit for 82 years.

At the same time, though, remaining childless lowers my stake in the future. And it sets me up for a pretty lonely retirement. I’ll get even less visits in my future nursing home than do grandparents today and I’ll be more dependent on a social system that is crumbling due to the decisions people like me have made.

Beyond this, an aging population changes the face of our society. The “4-2-1 problem” is a legacy of China’s now abandoned one-child policy.

Those only children are left to care for two parents and four grandparents. And on the flip side, these “little emperors” have been shown to be more risk-averse, and less caring, competitive and trusting.

Chinese people don’t get to vote, but if they did, they’d be on track for a greying electorate like we already have.

South of the border, people over retirement age are the fastest growing part of the population, holding significantly more voting power than Millennials and gen-Xers.

Some have argued that due to similar circumstances, Prime Minister Justin Trudeau reversed plans to raise Canada’s retirement age to 67 shortly after coming to power.

We’re living longer, by an average 10 years, since the Canada Pension Plan was created. Yet our retirement age hasn’t budged.

Australia, Britain, Denmark, the U.S. and other countries are raising their retirement ages to 67 or 68. Finland has indexed theirs to life expectancy.

If the system gets too unbalanced, it could pit generations against each other, Ali thinks. Pensioners believing they’ve paid their fair share against young workers who feel like they’re supporting lengthy retirements that aren’t in the cards for them. “Just think about what that does to society. Think of the kind of Social Darwinism that creates.... How does this impact how we treat our elders? How does the impact how we treat our kids?"

Ali says we’re going to have to work later into life and I agree with him there. He warns that the developed world could be blindly heading toward an “underpopulation crisis.” It will take more than well-reasoned TED talks to fully turn that around. Maybe we need to be thinking about how we can make our economy, social programs and society vibrant and viable with a declining or stagnant number of people, which looks to be an inevitability.

Some people don’t like kids. I’m not one of them. I know I’d enjoy parenthood (at least some aspects of it) and having the chance to raise a mini-me. My own father says being a parent is his “favourite thing” and the glow in his face doesn’t lie. 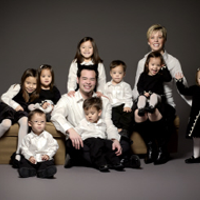 Admittedly, my mind is no longer made up. Ali has a knack for raising the stakes, asking, “What happens to society, morally, culturally and spiritually, if we just tap out?"

Am I tapping out? I’d prefer not to see it that way. I now find my narrating-self saying, “Well, you’ve still got five years to decide.”

In the meantime, I’m more concerned with advancing my career, saving up for a better apartment, and, honestly, I want to travel and enjoy my life for a while.

Now, however, I’ll be doing that with questions floating in my mind, placed there by Wajahat Ali as he wrapped up his 13-minute talk.

“Babies have always represented humanity’s best, boldest most beautiful infinite possibilities,” he said. “And if we, in developed countries as a whole, don’t invest in future and present generations, then what’s the point? What’s the point of being on this absurd journey together?”