Tyee education and youth reporter Katie Hyslop has two things on her mind: children and money.

She demonstrated them during Wednesday’s Three Things interview with a show-and-tell of a stuffed lamb, which belonged to her grandfather, Poppy, and a change tower (think ergonomic piggy bank). Together, the items represent the current challenges faced by British Columbia’s education system: how to ensure that families and teachers have the resources to keep kids learning.

As Tyee outreach manager Emma Cooper pointed out, this year has been nothing if not about education — whether it’s Indigenous land rights with the Wet’suwet’en conflict, pandemics with COVID-19, or racial injustice following the police killing of George Floyd, many of us are trying to keep up and understand. But the acceleration of those informal lessons has coincided with an unravelling of formalized, traditional education — most severely impacting those who struggle with and need it the most.

Prior to COVID-19, poverty was the biggest barrier to a supportive learning environment for many B.C. kids. Today, that gap has only grown.

“Before this pandemic, 20 per cent or about one in five kids in the province were already living in poverty,” Hyslop said, noting that the statistic increases for kids with special needs, Indigenous and immigrant children, and kids of single parents.

Yet everything needed to get a child from bed to school in the morning — food, housing, clothing and transit — relies on money, and the pandemic has increased financial restraints for many families, with unemployment going up more than four per cent in recent months and women disproportionally affected.

“Everyone says that ‘oh, they’re not a cash cow,’ but their funding is used basically to help buoy up our public education system,” Hyslop said of revenue from international students, who pay four times what domestic students do and contribute 25 per cent of B.C.’s educational operating budget.

Like so many things right now, there are many uncertainties around the future of schooling. We don’t know what classroom learning will look like come fall and whether international students will be allowed back into the country.

If one thing is known, it’s that change is on the way. That’s not necessarily a bad thing, Hyslop said.

The current school year, which starts in September and runs through June, was established more than a century ago so that children could help during the growing season. Today, Hyslop noted, most of us are not farmers.

“But our school system is still set up this way, and one of the problems with that is every student, but especially students who are low income and who have complex needs, lose a lot of learning that they had the year before by the time they get to September,” she said. Exploring a year-round school calendar could improve education for some children.

The other conversation to emerge from COVID-19 is how distance learning could be used moving forward. It’s something Hyslop said she’s interested in seeing happen, based on how some students with social anxiety thrive in a home-learning environment.

“It would be amazing to see if we could offer that as an option to students,” she said, adding that it shouldn’t overburden teachers. “That’s the thing I hear from teachers a lot, is there’s no way they can do both the online and the in-class. It’s too much work.”

Hyslop fielded several other questions about the future of education. Here are a few.

Should schools have health-care aides to help with hygiene and increased cleaning? Again, it all comes down to money. “Going forward, it would be a great idea to do that. All it needs is money — so, a will, basically.”

Should we have a livable basic income? Hyslop didn’t hesitate: “I think that’s a spectacular idea,” she said. “One of the recommendations I was going to make was make the Emergency Response Benefit permanent.”

Do you want to share any other solutions? “Reinvest in public education, from your early childhood education up to the PhDs,” she said. That includes raising the minimum wage, creating affordable family-sized housing and emphasizing Indigenous self-determination. “Work with them instead of against them, because they are overrepresented in child poverty.”

And the final question, from Tyee host Cooper, was how people can be better allies to kids in the school system. Hyslop’s answer: educate yourself. 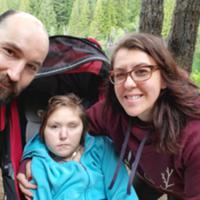 Parents of Kids with Complex Needs Are at the Breaking Point

“Listen to Black people. Read. There are so many books being recommended right now in terms of learning more about what it’s like to be a non-white person in Canada,” she said, noting Policing Black Lives by Robyn Maynard (read Hyslop’s review here.) “Listen to all people of colour. Take their experience and reality seriously. I think we need to stop aligning ourselves too much with white people who do racist things because we think, ‘that could have been me’ or ‘that could have been my brother.’ White feelings are the things that we need to consider the least right now.”

“Because right now it is almost entirely centred around white people, whiteness and 150 years of Canada,” Katie said. “There’s a lot of things I’m learning as an adult that I really should have been learning in the K-12 system and I think we need to change that.”

View the entire conversation here or on The Tyee’s Facebook page. Watch our newsletters — you can sign up here — for a Zoom link for next week’s edition with Tyee publisher Jeanette Ageson.