For decades, Canada and other countries have been chipping away at their social safety nets, removing many services and safeguards for citizens. Where will this path to austerity lead us? 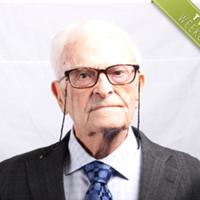 In a unique event, The Tyee and Simon Fraser University's Vancity Office of Community Engagement will bring together 92-year old Harry Smith and 29-year old Tyee sustainability reporter Geoff Dembicki for an evening of discussion about the path that Smith believes Canada is headed down if we fail to act.

You may remember Harry Smith from an article by The Tyee's Ottawa reporter, Jeremy Nuttall. Smith's message struck a chord with readers, and the profile quickly became one of the site's most read articles. Since then, Smith has signed on to write a series of essays for The Tyee as part of its election coverage.

JOIN US FOR AN EVENING WITH HARRY SMITH

What: In conversation with Harry Leslie Smith: The Canada We're Losing, and How to Get It Back When: Tuesday, June 16, 7 p.m. Where: Djavad Mowafaghian World Art Centre, Goldcorp Centre for the Arts, 149 W. Hastings St., Vancouver, B.C. Cost: $25

The event will also be shown live in an online webcast. Check the event page on June 16 to access the webcast.

A survivor of the Great Depression, the Second World War, and an immigrant to Canada, Smith has lived nearly a century of history. He has witnessed first-hand the effects of austerity measures on citizens, and he is devoting his time to sharing his story with younger generations.

The evening will feature a rousing speech from Smith, a reading from his bestselling book, Harry's Last Stand, and an onstage conversation between Smith and Dembicki, who has written about energy and climate issues for seven years at The Tyee. A reception will follow, where you can hobnob with Harry, pick up a copy of the book and enjoy refreshments, including beer from reception sponsor Howe Sound Brewing.

"Harry Smith defies easy definition. At 92, he's lived through more than most of us can imagine, and yet still retains the vigour of a 'youthful rebel,'" Dembicki said of Smith. "Harry's belief that government should not take more from average folks than it does from corporations is something that politicians like Jim Prentice ignore at their peril."

What can young Canadians learn from Smith's experience? Dembicki said: "I'm going to be asking him for advice on a question that's vexed many progressives across Canada -- and especially those from my millennial generation. How can we channel our distrust of politics and large institutions into a new and hopeful narrative of change?"

The event will be held at the Djavad Mowafaghian World Art Centre, Goldcorp Centre for the Arts in Vancouver, on Tuesday, June 16, at 7 p.m. Tickets are $25.

Proceeds from ticket sales will go towards The Tyee's reporting on the federal election.

Hope to see you there!