"For centuries, people have looked down into the ground to dig for water," says Majid Bahrami with a chuckle. "They should have been looking up into the sky." 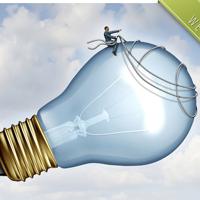 He's not just waxing poetic. Bahrami and co-inventor Farshid Bagheri are the founders of Watergenics, and together, they have developed a device capable of extracting clean, potable water from thin air. It's a technology that can run on solar power, extract up to 40 litres a day, and could one day have potent environmental and humanitarian applications.

"The atmosphere is the place to get your water," says Bahrami. "It's sustainable. You can't dry it out no matter how much you extract -- it will automatically evaporate from the oceans, and make everything uniform again. If you compare that to an aquifer, the time it takes to replenish an aquifer is 150 to 200 years."

If anyone is able to speak on the matter with authority, it's Bahrami. An SFU professor and Canada research chair in alternative energy conversion systems, he's spent a good portion of his career invested in clean and sustainable energy projects -- including as the founder of SFU's Alternative Energy Conversion Lab. Co-inventor Bagheri is similarly knowledgeable, having worked on hyper-efficient refrigeration systems for trucks and trailers before starting his PhD.

For the past three years, the duo -- with the help of a five-person team -- have developed their invention in the lab at SFU's Surrey Campus, refining the process and field-testing it in a chamber capable of replicating any atmospheric condition on the planet.

"The potential of this -- that's why I'm so excited," says Bahrami. "It can change deserts into greenhouses. It can change communities. And that's what gets us going. And hopefully we can make a business case for this as well. Take it out of the lab and into the market."

Watergenics owes much of its existence to SFU's Venture Connection, an interdisciplinary program that offers support and education to early-stage entrepreneurs (students, teachers, and alumni) in any faculty. Since its founding in 2008, the program has led hundreds of startups like Watergenics through workshops, mentorship, co-op terms, and an early-stage business incubator, all designed to help bring innovation into the marketplace.

"Traditional university education is fairly siloed," says Sarah Lubik, SFU's director of entrepreneurship, of the cross-faculty program. "Increasingly education institutions are realizing we don't solve important problems in silos. We solve them by getting together, putting biologists with technologists or engineers."

That holds true for Bahrami and Bagheri, who learned to get out of the lab and talk to potential investors. "We're technical guys," Bagheri says. "We don't always see the business and financial parameters like they do. They were asking questions that I hadn't heard before."

As a result of the program, he notes, they've begun to make a number of connections, including potential investors, Coast Capital Savings, and even the president of SFU.

"They've all been very interested. We're getting to know all these business and financial guys, and that's all out of Venture Connection."

A handful of Venture Connection success stories will be on display at SFU's 50th Anniversary Celebration: Surrey Campus Open House on March 2. Among them, a homebrewing kit, a scent-diffusing app, and a start-up called Artemis http://www.artemistech.ca/ that uses drones to provide inexpensive aerial photography that allows B.C. grape farmers to predict growth and detect disease.

Though Bahrami and Bagheri will miss this year's SFU Surrey Open House, they'll soon be heading to the 2016 Globe Series, one of the largest sustainable technology conferences in North America. From there, they hope to sniff out their company's next steps -- no easy task in an as-yet-undeveloped technology space.

"There's no market for this, because it doesn't exist yet," Bahrami says. "But you go to these developing countries -- India, China, and you see that people are suffering... In places like the Middle East, North Africa, even California, they're using water as if there's no tomorrow. This is the solution, as far as we're concerned. We just have to make it economically viable. That's the trick."

One thing they're not short on are ideas. There's talk of scaled machines for everything from residential apartments to large industrial projects. There's talk of working with Toyota on zero-impact hydrogen stations for fuel cell cars. There's certainly a lot of work ahead, and a need for more bodies -- not just in the lab, but in marketing, PR, and business development. But in the end, both Bahrami and Fagheri agree, it will be work worth doing, with benefits that could be felt globally for generations.

"Forty-eight countries in the world are going to be in a state of water crisis by 2025," Bagheri says. "If we can get involved in that market, that would be good for our company. We could meet people every day, and help them to resolve that crisis. That would be fantastic."