The Christmas season is almost upon us, and with it a slew of turkey dinners, Christmas carols, figgy puddings, and of course that most beloved of holiday traditions, spending approximately $1,500 on your friends and loved ones. 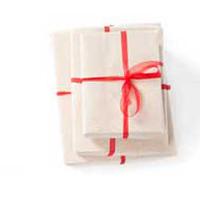 Five Ways to Take the Corporate out of Christmas

But the first week of December is also the time for a more recent seasonal tradition: the third annual Buy Local Week. This celebration of community asks the question: rather than spending your holiday dollars to make Walmart or Sony's season a little jollier, why not make your purchases at your favourite local businesses?

"Local businesses are the heart and soul of our communities," notes Maureen Cureton, Vancity Credit Union's energy and environment/local economy manager. "If we all recognize the value they bring socially and economically, and shift some of our spending this holiday season (and throughout the year), collectively we could make a very big impact that strengthens our local economy and the communities in which we live and work."

This is the second year of The Tyee's buy local contest, in partnership with Vancity and LOCO.

This year, Buy Local Week has increased its scope across the province, both in terms of the number of business groups involved as well as the number of cities, including Vancouver, Richmond, Burnaby and Whistler. The goal of the initiative remains the same: to foster increased awareness of local business and local producers, to strengthen local communities and to create sustainable local economies.

"When you buy from a locally-owned business, money circulates in your community 2.6 times more than it would with a chain," explains Amy Robinson, founder and co-executive director of LOCO, the business alliance behind the initiative. "If you spend $100 at a local business, $46 of it stays in your local community, versus $18 if you shop at a large corporation. We want to keep that money in the community as long as possible."

So, before you start dashing through the snow in search of seasonal necessities, take a moment to peruse The Tyee's guide to key holiday staples and their local alternatives.

No yuletide season is complete without an ample supply of holiday cheer. But before you settle on your choice of Christmas spirit, it's worth taking a moment to consider the true impact of that imported peppermint schnapps.

"There's $1,500 being spent by the average Canadian during the holidays," Robinson notes. "Even if B.C. consumers shifted one per cent of that spending, $15, to a local business, that would generate $94 million for B.C. workers and 3,400 jobs. Most people can think about it in terms of a $15 purchase. That's one bottle of B.C. wine."

If wine isn't your cup of tea, there is no shortage of other options, from the ever-popular Craft Beer Advent Calendar to the newest addition to the local liquor landscape: craft spirits.

Since restrictions on distilleries were relaxed in February, Vancouver in particular has seen a widespread proliferation of establishments dedicated to high-quality, small-batch alcohol. False Creek's Long Table Distillery* and East Van's Odd Society Spirits were among the first to emerge, and like the craft brewers before them, they're already providing exciting alternatives to more mainstream fare.

Odd Society is a small, family affair: founder Gordon Glanz's father is an investor, and the building itself was renovated by his brothers, who rebuilt it from the ground up. Glanz holds a master's degree in brewing and distilling, and together with general manager Miriam Karp and brewer/distiller Joshua Beach, he manufactures Odd Society's signature products (Wallflower Gin, East Van Vodka, and a Creme de Cassis using B.C. blackcurrants) in two copper reflux inside their Powell Street facility.

Long Table also offers its own vodka and several different varieties of gin, as well as an original spirit known as "Marc du Soleil." Following in their footsteps are nearly 10 others, including Granville Island's Liberty Distillery, Yaletown Distilling, Deep Cove Brewers and Distillers, and even the Artisan SakeMaker.

As of 2012, the global toy industry had an estimated net worth of $84 billion. Yet according to research, virtually all of the North American market is dominated by imports, and only one in 20 toys has a lifespan that lasts longer than a single year.

But there are a number of local alternatives for those of us who don't want to be confronted by the Ghost of Christmas Present, from craft fairs to locally-owned stores like the Toybox and Toy Jungle. And for those toying with the idea of taking things further still, there are even locally-made playthings, like those manufactured by Vancouver Island company Natural Pod.

"We looked at the market and noticed that there weren't a lot of options for truly open-ended, non-toxic, locally-made products," explains the company's Bridgitte Alomes. "We were initially driven by our own need as a family, but we quickly learned that a lot of other families and educators had the same need."

Founded back in 2008, Natural Pod manufactures its toys and play furniture in the Cowichan Valley -- products they've designed to be both sustainable and non-toxic. The goal, Alamos says, is to stimulate creativity through open-ended design, with a focus on the long-term developmental benefits of play itself.

"People are choosing us on some level because of the beauty and the design," Alomes says. "But they may not realize that there's a supporting message behind that. We can tell you who made it, what it's made of and where it came from. We're making the choice to support sustainability and our environment."

Whether it's meat, vegetables or questionable holiday fruitcake, the food products consumed by the average North American travel more than 2,000 kilometres before they reach our plates at Christmas dinner -- much of that by air or truck.

Luckily, for those of us in Vancouver hoping to reduce our footprint and support the local economy, there are no shortage of options close to home, from desserts (Aphrodite's Pie Shop, Cartems Donuterie and Earnest Ice Cream parlour), to organic produce (SPUD).

Outside of the factory farming process, and without all those food miles attached, holiday edibles are also healthier and tastier. Nowhere is this more evident than with the season's signature dinner item: the turkey.

"If you're getting a turkey for Christmas dinner, it's worth looking at the store where you're buying it, and where they're getting it from," LOCO's Robinson notes.

Fortunately for all of us eager to have a holiday gobble, the province has no shortage of farms and farmers markets to service our poultry-related needs. One such operation is Big Bear Ranch, an 1,100-acre farm 75 kilometres outside of Williams Lake.

Big Bear is a small, family-operated business, certified organic since 2004, and committed to both low-stress handling techniques and large pastures for grazing. In contrast to factory farms, their herds are small -- this year, roughly 50 cows, 20 pigs and 100 turkeys. Despite their size (the farm is managed by owner Rainer Krumsiek, his son, and his daughter-in-law), and their commitment to sell to private citizens over restaurants and stores, demand for the farm's meat has been steadily increasing. In fact, Krumsiek explains, they're regularly sold out by March or April.

"It's growing every year, just by word-of-mouth," Krumsiek notes. "The only advertisement we have is a webpage. Nothing else. Now, we drive down to Vancouver every four weeks with five freezers full of meat and stay as long as the supply lasts."

Krumsiek delivers all of the meat personally, allowing his customers a chance to ask questions and gain insight into Big Bear's farming practices. The approach seems to be working; of this year's turkeys, he notes, only 20 of the original 100 are left.

"We have 20 left in our freezer, but at least half of them are already sold," Krumsiek says. "We're doing one more delivery on the 13th of December, and I'm pretty sure by then they'll all be ordered."

So get yours fast.

Each December, Canadians consume a whopping seven-million litres of eggnog, according to figures compiled by Statistics Canada.

Here in B.C., finding locally-produced eggnog is surprisingly easy, considering the size of the province's dairy industry, which produces roughly $1 billion in revenue each year (for reference, that's about as much as the B.C. film industry).

The province is home to roughly 550 dairy farms, 33 dairy processing plants and more than 72,000 cows, many of which are concentrated in the Fraser Valley. B.C. dairy farms are, in fact, among the largest in the country, with an average farm having around 130 milking cows.

But what of the 'nog itself? Meadowfresh and Avalon Dairy -- both local operations -- feature the sweet, viscous concoction each season between November and early January. Avalon, a certified organic, locally-owned farm which has been in business since 1906, produced 30,000 units of conventional eggnog last season along with 14,000 units of the organic variety.

"We have customers calling starting in September looking for our eggnog," beams Avalon CEO Gay Hahn. "We only use whole milk and secret ingredients, therefore the taste is exceptionally superb. This year we're projecting a 15 per cent increase in sales."

Although it's still family-owned after all this time, Avalon is not a small operation. It produces 500,000 litres of milk each month (60 per cent of it organic). However, as the company's own promotional literature states: "Three out of four Santas on City TV stated that our organic eggnog was the best they ever tasted!"

And finally, the chestnuts roasting on an open fire

Okay, so you may have to provide the fire. And they may not be chestnuts. But the good people of Agassiz-based Canadian Hazelnut have, for the past 25 years, provided a delicious, year-round, grown-in-B.C. alternative to this holiday classic. Operators are standing by.

Seriously. They have 60 acres up there. It's nuts.

This is the second year of The Tyee's buy local contest, in partnership with Vancity and LOCO.