Gas prices are through the roof. Should the government take action?

Early June Dr. Steve, who travels around Vancouver on foot and by bicycle, says: Hell no! Let this be a lesson to the gas-guzzling, motor-mad mob. Let them pay a pump price that reflects the real price fossil fuels exact from our world. Let them watch the gas gauge spinning like Satan's carousel and realize those soaring numbers could be a prediction of tomorrow's temperatures if we don't change our ways and moderate consumption.

Late June Dr. Steve, however, has a different perspective. He registered his beloved 31-year-old BMW for his annual cross-country drive to Manitoba, the only driving he typically does all year. And thus last week, Dr. Steve stood at a pump for the first time since gas prices skyrocketed like a billionaire's orbital vanity project. As the pump scale whirled at tornadic speed, the scales fell from the eyes of Late June Dr. Steve. And Late June Dr. Steve promptly attached upside-down Canadian flags and several “F*** Trudeau” signs to his vehicle. Late June Dr. Steve is mad as hell and isn't going to take it anymore. Late June Dr. Steve demands freeeeedom! And gas rebates.

Thus, Early and Late June Dr. Steve combine in one divided soul the split within our nation. Except, to be frank, the soul of our nation is not split — possibly just chipped slightly. The self-righteous, serves-you-right part of our national soul would probably fit into one of the national ear lobes. The remainder of our national soul wants lower gas prices and wants them yesterday.

The issue is not really cut and dried. Early June Dr. Steve was paying for high gas prices at the grocery store and elsewhere as shipping costs trickled down. Everyone is suffering, including those without access to reliable public transit. And much of the global inflation wave is underpinned by high fuel prices. (It's remarkable how many different governments are said to be at fault for those high prices — there are precious few problems that have been simultaneously blamed on Justin Trudeau, U.K. PM Boris Johnson and Turkish President Recep Erdogan, to name but a few.)

But Early June Dr. Steve might point out that the policy rationale for gas taxes is at least in part to discourage driving and depress demand for fuel. The pain is the point. Handing gas rebates to motorists defeats that purpose. Still, it takes a very strong-willed politician to stand up and say, “Suck it, John and Jane Q. Motorist.” A death wish, even. If gas rebates do come, Early June Dr. Steve will refuse to cash the cheque. Late June Dr. Steve will cash it, buy more “F*** Trudeau” signs, and try to recoup some of his recent crypto losses.

(As a sidebar, the younger generation has taken a lot of crap in recent years for buying avocado toast, expensive coffee creations and what not. Perhaps Boomers who are now willing to pay $200 to fill up an SUV have lost their moral authority to preach austerity. If someone could make a truck run on avocado toast right now, it could mean big savings.) 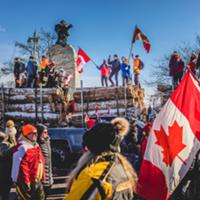 The Dangerous Rewiring of Canadians’ Minds

Anyway, now the road trip is underway. And it's awkward — the two Dr. Steves are driving along in surly silence.

However there are some issues that Early and Late June Dr. Steve agree on. One is the tragic situation of Saskatchewan gophers. Driving across that beautiful and underappreciated province is like visiting the set of a Quentin Tarantino movie — squished gophers everywhere. Locals probably put them on pizza. Certainly everything else eats them, and the prairie food chain appears to rely on them, offering an endless buffet for crows, magpies, coyotes and even other gophers, who are remarkably unsentimental about dining on their flattened cousins. It's an obstacle course though. One wonders how many accidents are caused each year by hydroplaning on gopher guts.

Come to think of it, this could be an untapped resource. The electric/gopher guts hybrid — prairie vehicle of the future. Elon Musk only wishes he'd thought of it.