Conservative leadership candidate Leslyn Lewis recently claimed that a World Health Organization pandemic treaty will override the Constitution and government sovereignty, impose WHO rules upon this country and possibly pave the way for a one-world government.

Do you have concerns about the WHO, and if so, what are they?

This is not news, my friend. Fifty-five years ago, the Who released the hit song “I Can See for Miles” about a jealous boyfriend capable of observing sketchy actions from afar. Teens of the 1960s thought it was merely a catchy tune. Fools! It was in fact a dire warning about WHO surveillance and control, possibly provided to Pete Townshend by Doctor Who after he travelled back in time from the current day — and then even earlier to the 1930s, when the Time Lord urged Abbott and Costello to couch their urgent message in vaudeville attire as they attempted to tell us that “WHO is on first.”

No one is laughing now.

Well, maybe a few giggles. And some nostalgic sighs, too. Conspiracy theories are like old movies or classic cars. Dr. Steve fondly recalls his high school days, when the secret one-world government was allegedly being run by the Trilateral Commission. The black helicopters of the United Nations were another sinister favourite. Conspiracy theories had real style back then.

Of course the one-world government vision goes all the way back to the King James Bible — the Book of Revelation has adapted itself to countless paranoid fantasies. Then there's the Protocols of the Elders of Zion, over a century old and hardy as a prehistoric roundworm. Now Lewis has found a new delivery system for the perennially pending threat of global tyranny. It will be a one-world government via the WHO, bringing their vaccinations and masks and American women with their war machines and… sorry, that's the Guess Who.

Perhaps it would be best to let Lewis explain it. In a Facebook/Twitter livestream last Wednesday, Lewis told supporters that the WHO's pandemic treaty would give the organization hegemony over Canadian citizens and the ability to decide “whether you'd be able to travel within or outside the country depending on the severity of the pandemic.”

“You would not be able to hold your elected officials accountable for the action of the WHO. It is essentially eroding our democracy,” she continued. The result, Lewis warned, could be “an area of global government.”

CBC News quotes SFU's professor Kelley Lee as responding: “Her claims are so far from the truth that it's actually hard to know where to begin.”

That's a feature, professor, not a bug. Anyway, it won't matter once the black helicopters arrive. But perhaps Dr. Steve has said too much.

Just as an aside, Dr. Steve has watched a Star Trek flick or two in his time and frankly, the whole one-world government thing seems pretty sweet.

Free one-piece Spandex togs! Plus, anything that hastens the day when we have holodecks and you can tell the microwave “Tea, Earl Grey, hot,” and it makes you the mug and everything — well, what's wrong with that? Unless you're a disgruntled potter. There never was a Star Trek episode about an uprising by unemployed ceramic artists and tailors and bartenders, etc. For that matter nobody really explained what Whoopi Goldberg's bartending job was supposed to involve. A future retro thing perhaps, or a recognition of the bartender's true function. Frank Sinatra could never tell his troubles to a replicator.

But Dr. Steve digresses. Our topic is the looming one-world government and the Canadian Conservative defence against it. If there really is a conspiracy out there, it may involve other Conservative leadership candidates urging Lewis to get out front with her theories, thereby making themselves look more reasonable. Some of them can use the help, notably Pierre Poilievre. The current front-runner has been attracting some problematic fanboys lately.

Never a good look when the Venn diagram of your supporters overlaps that of Der Fuhrer. 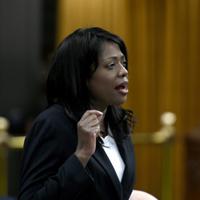 Team Poilievre lurched into another controversy recently when Conservative finance critic Ed Fast quit his post under pressure from Poilievre's supporters. Fast's cancellation came after he criticized Poilievre's promotion of cryptocurrency and his promise to fire the Bank of Canada governor. Freedom of speech has limits, Ed. You can't just yell “Crypto is a hoax!” in a crowded bubble.

Besides, Poilievre is fighting for fungible freedom. Just watch, if the socialists get their way it will become impossible for a normal, heterosexual male to offer a horse in exchange for sex.

The Conservative race is certainly offering a sharp divide, with Patrick Brown, Jean Charest and Scott Aitchison on one side and Roman Baber, Poilievre and Lewis way off on the other. Are these right-wing candidates really very different? Or are they, shall we say, kooky-cutters?

At this point the smart Bitcoin is still on Poilievre for the win. Sure, the Who sang “Won't Get Fooled Again,” but that's one theory nobody believes.