During the fall 2015 campaign that would ultimately make Justin Trudeau prime minister, Stephen Harper got a problem he didn't need. The Conservative candidate in the riding of Scarborough-Rouge Park, Jerry Bance, was in trouble. While repairing a dishwasher at a private home, Bance was caught on a home security camera peeing into a coffee mug, giving the mug a quick rinse and leaving it in the sink.

It is not that unusual for a political candidate to get into difficulty due to an inability to keep his pants zipped, but this was surely a new variation.

“Pee Gate” caused Bance to resign his candidacy only weeks before the election. Harper needed a new candidate willing to accept short notice and long odds.

Sometimes, one person’s bathroom break results in another’s big break. Leslyn Lewis, who had been active in Conservative Party politics and fundraising, took on the challenge. In the end it wasn't close and Liberal Gary Anandasangaree cruised to victory, but Lewis managed to garner 27 per cent of the vote, proving her mettle.

Five years later, still without a seat, Lewis ran in 2020 for the Tory leadership. Her third-place finish made her a new political star.

Less than a year ago, Lewis was elected MP for Haldimand-Norfolk. And last week she announced her second bid for her party’s top job.

Lewis, 51, was born in Jamaica and came to Canada with her parents at the age of five. Her education at University of Toronto's Trinity College, York University, Schulich School of Business and Osgoode Hall Law School equipped her with four degrees, including a master’s in environmental studies and a PhD in international law. Lewis would start her own small Scarborough practice, Lewis Law, in 2006.

Her 2020 candidacy to succeed Andrew Scheer was the longest of long shots. Lewis was a political unknown who had never held elective office. But then, neither had Donald Trump before he became president. Lewis may not have had Trump's celebrity but she did offer the same sort of fearless outsider appeal, combining unapologetic social conservatism with a bit of populist spin. “I know what it’s like to put a payroll for a small business on your personal line of credit,” she said. “I know what it’s like to be a single mother.”

The convention was chaotic. First ballot results were scheduled to be revealed Aug. 23 but did not arrive until after midnight EDT. They were stunning. Lewis was third in total votes, fewer than six percentage points behind neck-and-neck frontrunners Peter MacKay and Erin O'Toole. A greater shock was coming on the second ballot — Lewis took the lead in the popular vote. All the same, the complicated points system used by the party put her in third place, meaning she was automatically eliminated before the third and decisive ballot that ultimately elected O'Toole. While Lewis is unlikely to embrace political comparisons to the 2016 presidential campaign of Hillary Clinton, both women won the popular vote and then got done in by the electoral system.

With that sort of insurgent success under her belt — and since last September, a seat in the House of Commons too — it's no wonder Lewis is making another run. Should she succeed, Lewis will be the first Black leader of the Conservative Party. “People see the party as too white and too male,” Lewis told an interviewer during her first run in 2020, “and they don’t see diverse representation.”

And yet Lewis has plenty of appeal for the sort of Conservatives, white male and otherwise, who may have considered defecting to the far-right People's Party. After declaring her renewed candidacy last week, Lewis threw down the gauntlet with an appearance on Ezra Levant's Trump-pumping, convoy-hyping Rebel News program. She is a committed evangelical and social conservative, describes herself as “pro-life with no hidden agenda,” and has been endorsed by the anti-abortion Campaign Life Coalition.

Lewis is on record as willing to consider a repeal of marijuana legalization. She also says her decision to run for leader in 2020 was inspired in part by seeing how much grief Scheer took for his failure to march in Pride parades. Lewis says she wouldn't march either. She opposed the government's ban on conversion therapy before eventually going along with the unanimous vote to support the ban under now-deposed Conservative leader O'Toole.

Although Lewis wrote a PhD dissertation titled, “Attracting Foreign Investments for Green Energy Projects in Sub-Saharan Africa,” there seems little chance of her ever running for the Green Party. She has promised to abolish the carbon tax and has said the issue of climate change has been, in some respects, “overblown.” 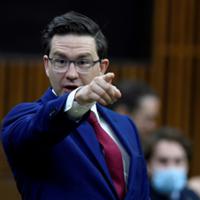 More recently Lewis has adopted the cause that most clearly defines the 2022 social conservative: opposing mask mandates and equating public health measures with tyranny. She expressed her support for the Ottawa truck occupation and long before it rolled into town she was already offering up the same kind of paranoid rhetoric favoured by the convoy crowd. In an October 2020 National Post guest editorial, Lewis referred to a “socialist coup” by the Trudeau government. “There will be no need to throw dissenters in jail,” Lewis wrote, “because new societal protocols can be put in place and those who fail to obey the ever-changing societal 'norms' can simply be fined or jailed for minor infractions.”

No longer anonymous in 2022, Lewis faces different challenges in her second leadership bid. Last time around her chief rival for the red-meat conservative vote was Derek Sloan. This year that same battle pits her against a heavyweight: Pierre Poilievre, who offers the same rabid right-wing stance with more experience and a higher profile.

Delivering her righter-than-thou message in French will also be an issue for Lewis. She promised to immerse herself in French instruction during her first leadership run — no doubt upcoming debates will illustrate how well the lessons have been going. (Lewis faces yet another potential problem: a lawsuit by her 2020 campaign manager claiming he was not paid for his work. The allegations have not been proven in court.) 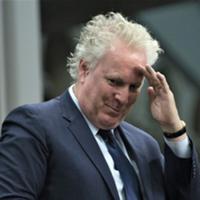 Well, Jean Charest, This Will Be Interesting

A victory by Lewis would certainly be a victory for diversity in Canadian politics, albeit perhaps an awkward one. For one thing she would be taking over a party that has tended to deny diversity is a valid issue to begin with. Then there was Lewis' 2020 dispute with the Association of Black Conservatives. They refused to endorse her in the Conservative leadership race, backing Erin O'Toole instead. The ABC's Akolisa Ufodike said that to have endorsed Lewis solely because she was Black would be reducing the issue to identity politics: “We look more at how their policies, their readiness and ability to lead can best serve Canadians, including marginalized communities such as the Black community.”

Lewis fired back, claiming the ABC had “worked to discredit me since its inception.” So far the organization has made no endorsement for the 2022 leadership race.

Was Lewis' 2020 success a first step on her climb to power? Or was her surprising convention result a flash in the pan? This time at least, the Lewis campaign will not have the benefit of novelty.