A new and highly selective parasite has invaded Alberta posing a hazard greater than the surging Delta variant, say researchers.

Dubbed “the Kenney contagion” after a premier who shows many of its clinical symptoms, the novel parasite appeared about 18 months ago.

It now appears to have infected almost every member of the United Conservative Political party and politicians as far away as Texas and Florida.

Sources suspect that a contaminated batch of whiskey may have started the puzzling outbreak, but they don’t know for sure.

Researchers say the pathogen infiltrates the heart and brain of elected officials with tiny round worms called “narcissisti,” leading to irrational, selfish, erratic and pathological behaviour.

In particular, the parasite cripples the moral reflexes of politicians. Whenever they must act quickly to avoid exponential threats, they hide, drink or go on Facebook.

The parasite also blinds politicians to their responsibilities, such as upholding “the precautionary principle” in the face of complex challenges to the public good.

The afflicted act entitled, consider themselves infallible and think everyone else deserves to be intensely criticized and blamed for their failures.

Dr. Sid Marty, who practices therapeutic satire in the foothills of southern Alberta, added that many of the infected have lost all touch with reality and “appear to be commuting to Edmonton from the 18th century.

“The health minister tried to get a grip on our reality, but unfortunately he broke the handle, so he now resides in a parallel reality to this one.”

Minister Tyler Shandro’s symptoms have baffled experts. After proposing to reduce nurses’ salaries by three per cent during the pandemic, he now is importing 500 nurses from across the country at double the normal wage rate due to chronic shortages created by the government’s reactive pandemic policies.

“Stupidity is always amazing, no matter how used to it you become,” said Dr. Jean Cocteau.

The afflicted often have no awareness of the seriousness of their infection and often verbally attack those abused by the consequences of their irrational decisions as “fear mongerers.”

The symptoms appear to grow worse over time and include a public aversion to doctors, nurses, health-care workers, children, pregnant women, people of colour, the immunocompromised and anyone requiring health care.

When the Delta variant started to pick up speed in Alberta, for example, Kenney declared the pandemic over, and promised Albertans “the best summer ever” even though politicians have no control over the weather but are trying their best by ignoring climate change.

As the Delta variant accelerated through the population, Kenney abandoned the province and went on holiday for 23 days to parts unknown.

Ignoring problems and doubling down on mistakes like gamblers is another symptom of the parasite, researchers say.

“It’s almost as though many of the afflicted believe that farting while tap dancing is a coherent form of communication,” added Dr. Kurt Vonnegut, a deceased expert on the parasite.

Those infected by the pathogen can’t abide public exposure, grow fearful and tend to primarily communicate by Twitter and Facebook.

Contrary to all scientific evidence and common sense, she cancelled most COVID-19 public health measures (everything from masks to testing and tracing) this summer, explaining that the province needed to focus on other respiratory diseases and syphilis instead.

Yet masks limit the spread of any airborne disease and syphilis requires the same test, trace and treat protocols as COVID-19 and its variants.

Public protests forced Hinshaw to retract her irrational decision, which indicates that in rare instances the parasite may be vulnerable to extreme public shaming.

Meanwhile, the outbreak appears to be growing worse among Alberta’s governing politicians.

After ignoring the pandemic for months, Kenney said he would pay the unvaccinated $100 to get vaccinated for “the love of God” — a policy that could cost the province $80 million because Alberta has the highest rates of unvaccinated people in the country. 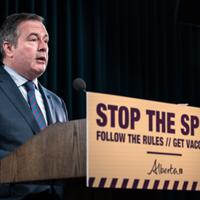 Researchers calculate that “the love of God” bribe will have no impact on the immediate Delta surge overwhelming hospitals because of the time it takes for two doses of the vaccine to produce antibodies.

One critic called the Mafia-like policy “an equalization payment from the vaccinated to the unvaccinated.”

Researchers are still working on a cure for “the Kenney pathogen,” which has spread to Saskatchewan and other political jurisdictions.

Despite warnings about the hazards of experimental doses of ivermectin, a horse dewormer, politicians have lined up for treatments.

Politicians, who appear to share the physiology and egos of 1,000 pound mammals, have evacuated the narcissisti worm with repeated doses along with several bodily organs including the spleen and liver.

But the treatment doesn’t seem to last long.

Other researchers suspect there is a way to take a page from Kenney’s latest offering and apply a form of outright bribery.

Offering the afflicted somewhere between $100 and $1 million to leave politics altogether and isolate at home may be the quickest solution to end the outbreak, they say.

“It’s immoral, and potentially very expensive. But consider the money and lives that would be saved over time,” said one researcher. “It’s worth a shot.”