“I’m furious actually,” she says over the phone from her home in Merrickville, Ontario.

“In this day and age I am furious that they are logging the last old-growth forests during a pandemic. It is sneaky.”

She squarely directs the bulk of her considerable wrath against the British Columbia government of Premier John Horgan.

“The whole idea of a democracy is to look after the whole,” she says.

And she thinks that fine idea has been undermined by Horgan’s commitment to the industrial logging of the province’s last remaining giant trees.

And all to take advantage of rising prices during a pandemic.

“It is so underhanded. It’s like watching a plumber perform brain surgery,” she adds with a ladle of Irish wrath.

“The liquidation of B.C.’s ancient forests and their rare genetic richness, represents a direct assault on Indigenous people and their ability to survive,” she argues. “It is a form of mass murder.”

Beresford-Kroeger knows a thing or two about colonialism. Orphaned at an early age, she just barely escaped the clutches of Ireland’s dreaded Magdalene Laundries, brutal residential schools for orphans, unwed mothers and prostitutes.

Raised by traditional Celts in the old ways and Brehon Laws, she learned how England’s colonialism systematically robbed the Irish of their language, customs and, yes, their once great forests.

Ireland once had magnificent forests but the patriarchs of the British Empire played a powerful role in their destruction, all for money.

And so the Celtic speaker and scientist would like to gently take Premier John Horgan by the scruff of his neck and sit him down in her kitchen where she’d like to explain some basic facts about old-growth forests.

Tea would be served along with uncomfortable truths:

“Have you no shame?” she would begin.

Taking away ancient forests and their rare genetic richness and diversity from Indigenous people whether they be Celts, Haida or Pacheedaht, amounts to the same thing:

It is like burning down a people’s pharmacy, library, kitchen and heritage all at the same time.

"I have been asked to put a dollar value on the trees of Fairy Creek,” she’d tell the premier just as she has told young protesters in letters of support.

“These ancient trees are priceless, like a smile in the eyes of a happy child, like the Mona Lisa, like a careful cougar, like good health, priceless. Nobody understands the web of life, let alone can put a dollar value on it, or on the future, which is coming down, now, tree by tree."

“You can’t imagine an ancient forest if it isn’t there, Mr. Horgan. It is a treasure.”

She’d add that civilized people don’t loot their treasures. Burning the furniture in your house to stay warm isn’t a good idea because the house is always next on the list.

Did the premier not understand that New Zealand stopped logging its native forests on public lands more than 20 years ago?

And then she’d pour Horgan a whiskey — if he was listening intently — and move on to medical biochemistry, an area of speciality for which she has earned renown.

She would appeal to Horgan’s humanity with a few words about DNA. “You do have some. I can guarantee you that.”

Does the premier not understand how closely related we are to ancient trees? “They carry the language of our DNA.”

Did he forget that ancient trees and people share all but two bases of the same DNA?

“These giants of the universe with their unique DNA represent a living library of medicine for the citizens of the world,” she’d patiently explain.

“They hold taxines for the treatment of breast cancers, taxodiones for prostate cancer, salicylates for pain relief, thujone for cardiac regulation, prostaglandins for arterial health. The crispr action of the multitude of bacteriophages in the soil connected with these forests is just being put on trial by science."

And then she’d launch into the weather and the atmosphere and climate change.

“You do know about climate change, don’t you?” she’d ask tartly.

She would raise the matter of carbon. "Old-growth forests sequester huge amounts of CO2. They have a handle on climate change.” Politicians don’t.

Does the premier want to be responsible for exterminating some of the world’s largest and oldest oxygen makers?

Intact old-growth forests, she would point out, remain our best natural defence against dangerous climate volatility because they have witnessed the greatest climatic variations overtime.

“The old-growth forests determine weather patterns. They initiate the release of aerosols. The trees produce a huge variety and volume of aerosols. These aerosols go looking in the atmosphere for hydroxyl molecules to make water and determine where the water will fall.”

Next she would remind Horgan that ancient forests do more than moderate precipitation patterns.

They regulate fish in the ocean by feeding the sea with vital minerals essential for plankton development. Traditional peoples in Japan encapsulated this essential knowledge into a proverb: “If you want to catch a fish, plant a tree.”

“These ancient coastal forests represent a giant cycle unique to the world,” she would tell the premier in an attempt understand the gravity of his decisions, the need to declare a moratorium on old-growth logging in his province. “When you reduce the forest, you are tampering with your fisheries and atmosphere and rain patterns.” 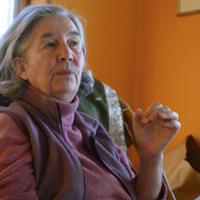 She’d finally tell John Horgan that time is running out. The debate is ending. The moment to act is not tomorrow but yesterday. We’ve got to think about labour and new kinds of work. We have to de-industralize logging and restore community forests.

“We all share planet earth. Our actions affect everybody. Should you remove oxygen from a dying child? Those forests also belong to you and me. It’s our global inheritance. “

Take a look at the Poplar River First Nation, she’d advise. They fought and fought to preserve Pimachiowin Aki. (Beresford-Kroeger played a significant role in that battle.) It’s a patch of the boreal forest the size of Denmark on the east side of Lake Winnipeg. It is home to millions of trees, hundreds of lakes, and clean rivers and wetlands teeming with fish and rare varieties of wild rice.

And then Beresford-Kroeger would bid the premier good day with a final caution.

Remember, she would add: “Time is running out and we are going to need these libraries of medicine for our uncertain future.”