I get it. Fireworks make you nostalgic. Maybe they remind you of sitting in the box of your dad’s truck with your siblings and cousins, huddled under a blanket with hot chocolates and salt and vinegar chips.

“Wow, they really went all out this year!”

“Was that the finale, do you think?”

I decided a few years ago — as we approached “Canada 150,” and after reading important pieces by Alicia Elliott and Ryan McMahon and Carleigh Baker and Jordan Abel — that I would no longer identify as “Canadian.” I stopped attending the fireworks shows, I stopped standing for the national anthem, and don’t even talk to me about temporary flag tattoos.

But I’ve never felt less “Canadian” than I do this year.

Last month, a group of people from the Tk’emlúps te Secwépemc Nation were able to prove that the bodies of 215 children forced to attend the Kamloops residential school had been buried in unmarked graves — their deaths likely undocumented — using ground-penetrating radar. Outcry from Canadians has been wide and loud. Such a tragedy. Horrific and heartbreaking. Those poor babies. Justin Trudeau said about this “distressing news” that “residential schools were a reality — a tragedy that existed in our country... [dismantling inequalities] starts with acknowledging these past wrongs.”

Were. Existed. Past. This language firmly positions Canada’s responsibility for genocide in history, and fails to acknowledge how the state continues to inflict harm on Indigenous peoples by withholding access to bare-minimum resources like proper housing and clean, safe water, and denying them sovereign access to their own land and resources. It fails to acknowledge that the Catholic church has not been held accountable for its actions. Or that the perpetrators of these violences, these murderers and abusers, walked away free of justice. They hold honorary degrees. They have commemorative monuments. And, it has been said, some of them ended up working within the systems of Child and Family Services, which, if you ask a survivor of the foster care system, is just a new name for the residential school institution that ripped Indigenous children from their families in the name of “betterment.”

It’s a game the government’s been playing for decades — the game of “how do we make it look like we care without having to change?”

Around the same time as the “discovery” in Kamloops (which was not so much a discovery as an acknowledgement of what the local Indigenous nations had already known for decades), a video began circulating of U.S. President Joe Biden talking about what makes America “unique.”

“Of all the nations in the world, we’re the only nation organized based on an idea,” he says. “Every other nation you can define by their ethnicity, their geography, their religion. Except America. America was born out of an idea.”

This quote perfectly exemplifies the attitude of colonial governments, and of U.S. and Canadian patriots celebrating Canada Day and Independence Day with hot dogs and street fairs and fireworks. It centres the white settler narrative of discovery and nation-building, and completely ignores the fact that at the core of this “idea” is the erasure of, and theft from, the people who already, for thousands of years, held this land in their bodies. The people who knew how to care for the land and be cared for by it.

You might be thinking, “But I know colonialism is bad! I’m not the enemy.” Good, I’m glad you know. But how much have you really thought about it? What responsibility have you accepted as a citizen of “Canada,” and what action have you taken to move towards Indigenous sovereignty?

The City of Victoria has announced they’ll be cancelling their online Canada Day programming, after the Esquimalt and Songhees nations pulled their participation. So far, no other governments have followed suit. In fact, Premier John Horgan has advised other cities not to join Victoria, stating, “The 21st of June, National Indigenous Peoples Day, would be a more appropriate time for us to collectively focus on how we can redress the wrongs of the past, and build a brighter future together.” This response by Horgan reveals his compartmentalization of Indigenous peoples to one day, removing us completely from the occasion of Canada Day. It’s particularly fitting, considering the formation of the state didn’t consider the needs of Indigenous peoples either.

I also don’t want to give the City of Victoria too many props. It wasn’t long ago that Victoria’s police forcibly removed Indigenous youth activists from their peaceful protest at the Ministry of Energy and Mines. This cancellation is a measured political move, one that, again, postures a stance of reconciliation by making a change so small as to not perturb settlers eager to celebrate. In fact, Mayor Lisa Helps noted that Victoria’s decision would allow everyone to mark Canada Day the way they wished. “That is the freedom that a country like Canada provides,” she said. 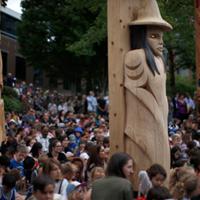 This Canada Day, We Need a New Citizenship Oath

But what about next Canada Day? And the ones after, when the uncovering of children’s graves isn’t making national headlines anymore? What about when we return to the regularly scheduled programming of missing and murdered Indigenous women, girls and Two-Spirit people? Will they be equally as horrified, heartbroken and shocked? This is the missing piece. It’s not just about Canada Day. It’s about Canada.

On “Canada Day” this year, I’ll be driving from the home I’ve made on unceded Musqueam, Squamish and Tsleil-Waututh territory, through the mountains, over the waterways, across the Prairies and back to my home territory on Treaty 6. I’ll be reflecting on the way this land and Indigenous peoples have weathered the blows of settler colonialism. I’ll be thinking about the children found in Kamloops, and now Brandon, and looking forward, countless other unmarked gravesites soon to be publicly identified. I will be mourning over 154 years of environmental plundering, institutional racism and genocide. I will not be watching a fireworks show. I will not be celebrating.

Let last year’s Canada Day have been our last. The holiday’s finale. One terminal burst of rockets, sparklers, and roman candles. Then ash and silence.

Visit Idle No More’s website to learn how you can take action this July 1.