We have entered the second year of COVID-19 in British Columbia, with more than 72,000 infections and more than 1,300 deaths. While the government has emphasized personal responsibility in preventing viral spread (stay home, don’t host gatherings), government data shows that workplaces are the second most common identified route of exposure after household transmission.

If workers are being asked to take personal responsibility and stay home when sick, the government has a responsibility to legislate paid sick days for all.

The 58 per cent of workers who lack any paid sick days face an impossible choice when sick: stay home and end up unable to pay rent or buy food, or risk going to work and potentially infecting others.

Low-income workers like janitors, retail and food service workers — the very essential workers who must work face-to-face with the public and co-workers, even during lockdown — are even less likely to have paid sick leave.

According to a report from David Macdonald of the Canadian Centre for Policy Alternatives, “Accommodation and food services, retail, and a broad category including janitors, temporary workers, tour operators and travel agencies, fall into this category, with only 19 per cent, 37 per cent and 32 per cent of leave paid for respectively.” As a teacher I know how important paid sick days are for both parents and education workers to keep schools safe.

Access to paid sick days is also an equity issue, with women and workers of colour more likely to work in the low-paid sectors least likely to provide paid sick leave. That’s one reason — not culture or a lack of personal responsibility — that racialized communities in Surrey have been disproportionately affected.

“One relates to the type of jobs that they do, and one relates to the necessity to work and the lack of options to shelter at home and to take some of the precautions that were suggested,” Francis said. “Factory work, working in the field, [those] tend to be the types of jobs where there’s no sick time. If they don’t go to work, they don’t get paid.”

But this ignores the evidence from the jurisdictions that have already implemented paid sick leave policies. Paid sick leave saves businesses money over time by reducing the chance of workers leaving a job by up to 50 per cent.

But why have no provincial governments legislated paid sick days despite a deadly pandemic? The federal Canada Recovery Sickness Benefit may have seemed like an alternative, but it is inadequate.

As the Decent Work and Health Network outlined in its recent report, paid sick days need to be universal, fully paid, adequate, accessible and permanent.

The CSRB fails on all accounts: it is temporary; it excludes many workers; it provides only $500 a week (before taxes), imposing a pay cut on many workers; and it is only retroactively available after missing half the work week and then applying. Need to miss only a couple of days work while waiting for the results of your COVID test, or a day to get vaccinated? Too bad, the CSRB won’t cover that. 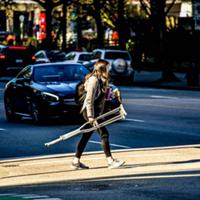 Workers Need Paid Sick Days. Here’s How to Do It

That’s why the Decent Work and Health Network, the Fight for $15 and Fairness and the Worker Solidarity Network campaigns all call for 21 paid sick days: 14 days during a pandemic, and seven permanent sick days going forward.

This is exactly the prescription the Ontario NDP has proposed with Bill 239, the Stay Home If You Are Sick Act. This has support from the Liberals and Greens but faces the barrier of a Conservative government that is asking Ottawa to amend the CSRB rather than taking responsibility and legislating paid sick days.

But the BC NDP has a unique opportunity. As the only provincial NDP government in Canada, Premier John Horgan could lead the way on legislating paid sick days by amending the Employment Standards Act, as called for by the many supporters that make up the B.C. Employment Standards Coalition.

This would set a clear example for other provinces to follow. And it would save lives. Because one more preventable COVID death is too many.