This week, both the federal Conservatives and the NDP made attempts at humour that fell rather flat. The NDP Twitter account sent out a fake version of the agenda for Tuesday’s Biden-Trudeau meeting apparently marked up with the prime minister’s notes.

It was not well-received. Then Conservative Leader Erin O’Toole topped it with a brief video suggesting that the party would relocate Justin Trudeau from the Prime Minister’s Office to a port-a-potty. Again, it did not kill.

Could you give them some pointers?

So could Dr. Steve be a political gag writer?

Hey, don’t laugh. It’s a safe bet you haven’t been so far this week. The NDP gag went over like a whoopee cushion at grandma’s funeral. And one can only guess who is writing O’Toole’s, er, shit. You can find more sophisticated material just below the penis drawings in a high school bathroom. Besides, if O’Toole is intent on launching a battle of toilet humour, he should probably keep in mind that his name is O’Toole. A certain amount of counter-punching seems possible.

Trudeau has had his own problems with levity. As Liberal leader back in February 2014, he appeared on the popular Quebec talk show Tout Le Monde En Parle and made a quip about unrest in the Ukraine. Trudeau suggested that Russian President Vladimir Putin would be more likely to cause trouble there after the poor performance of the Russian Olympic men’s hockey team. Trudeau probably had some great invasion-of-Poland gags as well but alas, time did not permit.

All of this demonstrates yet again that political humour is too serious to be left to politicians. People do like to laugh. But politics is like sex — you don’t want them laughing at the wrong times. Or at the wrong things.

Political humour is actually more difficult than ever, because so many politicians have blurred the lines between the serious and the ridiculous. That we are in something of a golden age for political humourists is paradoxical — it reflects the narrowing gap between reality and satire.

Take the wonderful Blaire Erskine of Georgia, who posts Twitter clips in which she takes on various roles such as the wife of Republican Sen. Tom Cotton or Georgia Rep. Marjorie Taylor Greene’s daughter. Her videos are so convincing that most of the hate mail she gets is from leftists who take her ditzy rambles seriously.

And no wonder — these days the distance from the Republican mainstream to clinical insanity is almost imperceptible.

One must try to find sympathy for our political leaders. It can’t be easy figuring out what people truly want to hear.

Imagine people telling you all day that what they want most in politicians is honesty. As a gullible newcomer, you might even believe it. Alas, the political novice soon learns that what voters really want is confirmation of their own particular beliefs and prejudices, which is not great for humour. A good comedian can throw light on uncomfortable truths. A good politician must run from uncomfortable truths like Ted Cruz abandoning his dog in a snowstorm.

Our politicians must always play roles — statesperson, polymath, paragon. If “clown” makes the list, it usually means something has gone wrong.

Still, there are ways to go about it. B.C. Premier John Horgan has mastered the trick via a particular sub-category of self-deprecating humour, the Dad joke. 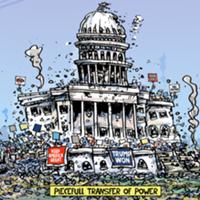 Please Advise! What’s the Status of Canada’s Own Loony Mobs?

And, as Nixon discovered, one can employ humour as a means of crafting for oneself a human simulacrum. O’Toole should keep in mind that self-deprecation is key. Bad: “We’re going to put Justin Trudeau in the shitter.” Better: “With Erin O’Toole you won’t get a leader who has to waste time on hair care.”

Barack Obama managed to demonstrate both the good and bad at the now-infamous White House Correspondents Dinner of 2011. Few politicians have mastered self-deprecating humour like Obama, and he was in rare form that night. Playing off the hateful “birther” controversy whipped up by audience member Donald Trump, Obama released his “birth video,” a clip from The Lion King.

But Obama then turned his focus on a different target — a member of the audience who resembled a failed carrot cake baked into a tuxedo. And it has since been suggested that Trump was so embarrassed by the ribbing he took that night that he vowed to gain the ultimate revenge.

Five years later, the joke was in the Oval Office guzzling Diet Coke. Political satire has been indistinguishable from political reality ever since.