The British Columbia government has put itself between a rock and a hard place with its stance on the Wet’suwet’en pipeline protests.

Premier John Horgan is trying to distance himself and his party from the controversy, suggesting it would be inappropriate for the government to intervene on a legal matter already decided by the courts. “The rule of law needs to prevail in B.C.,” he said last week.

Is he right? Can those of settler heritage stand by and watch as governments, the court and the RCMP use force to override the rights of Wet’suwet’en hereditary chiefs?

My family has been on the traditional territories of B.C. First Nations for five generations, but like many people in this province I am only now coming to terms with my status as a settler.

Thanks to the long struggle of First Nations and the work of the Truth and Reconciliation Commission, I no longer think that I can sit idly by and watch as this destructive train runs off the rails.

Indigenous author Bev Sellars, former chief of the Xat’sull First Nation, has summed up the challenge for settlers.

“I know you are not personally responsible for these laws and policies, but now that you are aware, you have a responsibility to help change the situation,” she wrote. “You cannot turn a blind eye to this because, if you do, you will be doing the same thing as your ancestors.”

That is why I was pleased when the B.C. government unanimously passed Bill 41, the Declaration on the Rights of Indigenous Peoples Act, with the strong support of First Nations. The legislation commits the government to adopt the principles of the United Nations Declaration on the Rights of Indigenous Peoples. It appeared that, collectively, we were no longer turning a blind eye to the situation.

The government seems determined to cast aside Bill 41, a groundbreaking piece of legislation with its promise to respect the rights of Indigenous Peoples.

That is a shame, because Bill 41 offers at least a partial means to break this deadlock.

It can and should immediately appoint a cabinet member immediately to negotiate with the Wet’suwet’en hereditary chiefs.

Still, some may wonder whether it is appropriate to intervene when it seems that the Wet’suwet’en themselves are divided — elected band councils on one side, hereditary chiefs on the other. That is a legitimate concern; ending the divide and rule policies of colonialism is important.

But recognizing the Wet’suwet’en hereditary chiefs does not mean delegitimizing band councils — it means recognizing both.

Appointing a cabinet representative would signal that the government recognizes that hereditary chiefs have a significant and legitimate role in decision-making, both historically and into the future. This is not new — the courts have already said as much — and it would allow the government to legally reverse its terribly destructive ‘no talks’ policy.

It could signal that the government appreciates the new era we are in. The Delgamuukw case affirmed that the Wet’suwet’en have Aboriginal title over their traditional lands, but did not define which lands. The Tsilhqot’in case built on that legal precedent and recognized that First Nation’s claim to control over at least part of their lands. 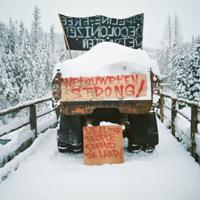 With Bill 41, the government now has the ability to recognize those precedents and deal with the Wet’suwet’en representatives, rather than forcing the First Nation into a long and costly court case. Recognizing both hereditary chiefs and band councils as legitimate governing bodies, as both the nation and the courts have done, is a first step.

The talks may well fail, or they might conclude in a momentous breakthrough. Whatever happens, is there really any other choice?

Let’s be honest. B.C. government policies have created this situation. Having embarked on the development of fracked gas and pipeline construction on Indigenous lands, they have given tremendous power to transnational corporations such as TC Energy, which is building the Coastal GasLink pipeline and now using the power of injunctions to threaten Wet’suwet’en hereditary chiefs and their supporters with violence.

The government’s apparent efforts to try and wash their hands of the situation now can only breed the worst kind of cynicism.

Now is the time for the B.C. government to act.

If the government persists in brazenly ignoring the Wet’suwet’en, they should know they may not do so in my name. Nor I suspect, in the name of many others.