Last week many people attacked Elections Canada for its explanations of what the Canada Elections Act says about third party “election advertising.”

Environmental groups were concerned after Elections Canada warned that saying things like “humans are causing dangerous global warming” could be considered partisan, and they could be required to register as third party advertisers.

The groups feared that in turn could lead to problems with Revenue Canada, given the limits on partisan activity by charities.

Here’s why they should reconsider their opposition — and consider the dangerous door they are opening.

Fact: Parliament decided the Canada Elections Act should not draw any distinction between factual statements and non-factual statements. The act states that “taking a position on an issue with which a registered party or candidate is associated” is subject to the third-party provisions. If this provision is too vague or too broad, the solution is to amend the act.

Fact: Elections Canada’s job is to administer the Canada Elections Act in a neutral manner. Elections Canada does not write the law and is not a court. It’s not authorized to distinguish between facts and non-facts. Demanding that Elections Canada impose its own views on what are facts is akin to demanding that it go beyond the mandate that Parliament has given it. Further, deciding what is a “fact” is inherently problematic: see the legal history of defamation, misleading advertising, hate propaganda. Basically, every court case involves a difficult assessment of what alleged facts are actually true.

Fact: Elections Canada is one of Canada’s best organizations. Consider the situation in the United States, where elections are run by extremely partisan officials on a state-by-state and county-by-county basis, with a wide variety in the design of ballots, the use of highly unreliable voting machines, discriminatory choices about where to place voting booths, extreme limits on advance voting, discriminatory provisions for voter identification requirements, extreme discriminatory gerrymandering of political ridings and “purges” of voters rolls (denying millions the right to vote).

Canada has a national elections body that has proven over its entire history to be diligent, trustworthy and neutral in administering the elections law that Parliament created. That is a wonderful gift to our democracy. Let’s be very careful about tarnishing this organization when we should always be arguing for improvements to the Canada Elections Act.

Fact: Elections Canada has nothing to do with whether the Canada Revenue Agency will register a charity and allow donations to that charity to be tax deductible. Please do not conflate how CRA and the common law define a “charity” with how the Canada Elections Act defines third party advertising.

Fact: Individuals and groups can buy advertising to communicate whatever they wish in relation to climate change. However, they might be subject to the third party advertising provisions of the Elections Act. If they want to avoid being subject to those provisions altogether, the solution is not to buy advertising for the approximately 37 days of the election period. If individuals or groups wish to buy advertising about climate change during those 37 days, they will be allowed to do so within the spending limits set out in the act. How many individuals or environmental groups will be complaining that the law prohibits them from buying more than $511,700 in advertising during the election period?

(And is there anyone who is undecided about whether humans contribute to global warming but will be convinced because an environmental group bought advertising during the election period telling them it is so? If I were a donor to a group that bought ads merely to say that humans cause global warming, I would be extremely disappointed. Almost certainly environmental groups want to communicate more than that single statement. They want voters to support parties and candidates that have good environmental policies.)

Fact: The third party spending provisions have a long, heavily litigated history. The key court decision is called Stephen Harper v. Canada. “Environment voters,” a division of Animal Alliance of Canada, Democracy Watch and the National Anti-Poverty Organization, among others, went to court to defend third party advertising provisions in the Canada Elections Act and to oppose Harper and his National Citizens Coalition, which challenged the provisions.

Limits on third party spending, together with limits on candidate and political party spending, were introduced to the act in 1974 based on the recommendations of the 1966 Report of the Committee on Election Expenses. Parliament prohibited all independent election spending that directly promoted or opposed a particular candidate or political party. The constitutionality of this prohibition was successfully challenged in the Alberta Court of Queen’s Bench in 1984 by the National Citizens Coalition. Although the decision was binding only in Alberta, Elections Canada decided not to enforce the prohibition elsewhere in the country.

Following the 1988 election, Parliament established another Royal Commission, the Commission on Electoral Reform and Party Financing, and ultimately re-enacted third party spending limits. The Alberta Court of Appeal declared these federal limits unconstitutional in Somerville (National Citizens Coalition) v. Canada in 1996. Parliament passed new third party spending limits in the 2000 Canada Elections Act. Those were the provisions that Stephen Harper attacked. After Harper won in two lower courts in Alberta, the Supreme Court of Canada upheld the third party provisions in 2004. They have remained in force largely unchanged ever since.

In 2010, the U.S. Supreme Court issued its notorious decision in Citizens United v. Federal Election Commission, which held that Congress may not limit third party spending by corporations and other associations. That led to an explosion in third party spending to influence election outcomes. 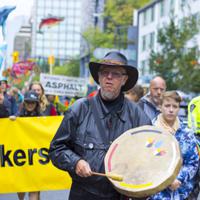 Fact: Third party spending limits promote equality and democratic participation. The Supreme Court told Harper and the rest of Canada: “For voters to be able to hear all points of view, the information disseminated by third parties, candidates and political parties cannot be unlimited. In the absence of spending limits, it is possible for the affluent or a number of persons or groups pooling their resources and acting in concert to dominate the political discourse... If a few groups are able to flood the electoral discourse with their message, it is possible, indeed likely, that the voices of some will be drowned out... Where those having access to the most resources monopolize the election discourse, their opponents will be deprived of a reasonable opportunity to speak and be heard. This unequal dissemination of points of view undermines the voter’s ability to be adequately informed of all views. In this way, equality in the political discourse is necessary for meaningful participation in the electoral process and ultimately enhances the right to vote.”

You want unlimited ability to buy advertising for your preferred facts? Be careful what you wish for. You are playing with fire.